Very cool! Let me know how it works out. Also GE has an z-wave outdoor smart switch that seems highly rated for about $40. Chord is very short though.

That’s exactly the outdoor module I was talking about, with the short cord. I already have a dusk-to-dawn light control plug of the same shape that I use for the holiday lights.

Neat idea about the rain sensor!

Oops skipped some stuff from your post - yeah I didn’t find a valve that already had the cord integrated. Had also thought about using a 2 prong outdoor cord and just stripping off one end and using that to connect to the valve but since I was hiding my stuff under a plastic bin in my back yard it really didn’t matter too much - Note: I am already using an outdoor cord with a smart plug attached.

You maybe could use something like the “Hot Headz Extension Cord Safety Seal Water Resistant Cord Cover” from Amazon to cover the connection between the unit and cord. I was also considering using heat shrink tubing on the individual wires and around the whole thing to really seal stuff up.

I came across this project when doing a google search for a solenoid valve.

I actually have one of those battery operated addon valves. The valves come with this kit and can be purchased separately.

Maybe I could wire up some cabling into the two little holes of the plug to power it and open/close the solenoid using a smart outlet. I figured I already have the valves (4 of them).

The Orbit valve I believe requires +24v to open and -24v to close. So to control it I think one can connect it to one of these instead of a smart outlet:

Some people use the MIMO dry contact bridge/relay to send open/close commands to garage door openers. It comes with its own power supply which solves my issue on how to power the valve. However, the relay is not outdoor rated so I’d still have to have some sort of weatherproof box to enclose the thing and its wires.

I know all that is not exactly about the Orbit/Iris Sprikler Timer but I figured that’s one way to get the same functionality but more compatible. By the way, this is all just information I found. I have not actually tested any of this.

That’s interesting stuff! Really like these forums because of all the great ideas and homegrown help. That MIMOlite module is what I was considering for the rain sensor. You might take a look at the “sockit box” on Amazon for outdoor storage.

Thanks! That’s a great option for protecting the relay and cables. I like how they have different sizes and colors.

i have a need for this but it seems a bit flaky? i want something that i can turn my hose on to put water in my pool. my plan was to use a water detection sensor in my skimmer so in reverse so that when it is dry it fires this valve. i don’t have many options to automatically get water into my pool other than my hose. want to buy this but it sounds like it is quote problematic.

Question, you said that these report correct state, on/off?

It seems they work okay, with both DTHs, but once on, after auto turning off after 10 minutes never report off to smartthings. Even clicking on refresh button in smartthings does not update state.

If I then click on/off in smartthings, it then shows off.

Did upgrading their firmware help them to correctly report state?

If I am going to use smart power outlet do I need the custom DTH for initial pairing? Should I try to unpaid and pair again without custom DTH?

Also, my orbit does not show firmware version in smartthings IDE.

I know this is an old post in an old thread, but I’m curious about this.

First off, I have a RainWave 4-zone controller that attaches to a regular 1/2” garden spigot. I built an in-ground system around it. (I’ll eventually get a ‘real’ controller fed from a 3/4” pipe.) it works surprisingly well. Grew a beautiful brand-new lawn from seed in 5 weeks using it.

It has the manifold with 4 separate valves, and that attaches via cable to an external control unit which contains the programming. The zones are completely independent of each other. As long as they don’t overlap, everything works perfectly. The controller runs on 2 AA batteries, and those last an entire spring-to-fall season.The system can also take a moisture sensor to tell it not to water if the soil is sufficiently moist.

Hypothetically, one could do exactly what’s being discussed here with this device. Run a control cable indoors, and have a relay that triggers the individual zones based on whatever scheduling system you wish. Do it in ST, and use DarkSky info to override or enhance that schedule as desired.

But then would I need to purchase 4 zwave relays, one for each valve?

I posted elsewhere about the upcoming hose tap:

Coming soon? http://www.truevalue.com/product/B-Hyve-Smart-Hose-Faucet-Sprinkler-Timer/86990.uts Looks like Bluetooth direct connection, but you can add a little wifi hub.

How does this integrate with smartthings?

Does not. I also posted a couple other products higher up / months ago of similar ideas.

The sprinkler does have Alexa connectivity, that’s the closest integration.

I just bought one if these Orbit Iris hose timers this weekend, it kicks ass. We are trying to grow grass in some bald areas on our lawn in Phoenix, AZ. It needs to be watered every two hours and sometimes, we aren’t home for that.

With the device handler posted in the 300’s I can also set it for more time as well.

Made a simple timer on webCoRE for every 2hrs and 15 minutes to water it for 15 minutes by sending another on/open command 5 minutes in.

I understand that this really isn’t made for SmartThings but that DTH works and it does it’s job.

Trying to figure out some plumbing for just a larger pot of flowers and I’ll buy another one.

The naysayers almost had me looking at other much more difficult items (Pi, Relays, Solenoid)

Orbit iris sprinkler: What is the latest firmware for these?
I have 2 at Current Version: 0x33002000

Hello, since this thread is now active again

Summer is starting here and I am going to start using 2 Orbits I have that I bought a long time ago.

What is the latest firmware? Wondering if newer units work better with smarttings?

Looks like the one I bought this weekend still has the same firmware as yours. 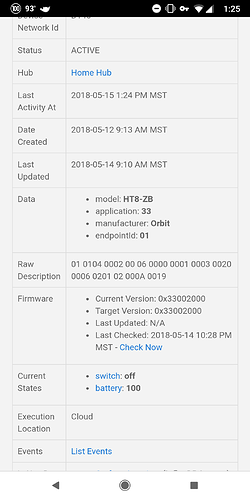 The DTH from gguthrie or however you spell it works perfect.

Thanks, you saved me from buying a new one in the hope of getting updated firmware!!

I understand that this really isn’t made for SmartThings but that DTH works and it does it’s job.
Trying to figure out some plumbing for just a larger pot of flowers and I’ll buy another one.
The naysayers almost had me looking at other much more difficult items (Pi, Relays, Solenoid)

I have a RainWave 4-zone device that works very well, but is not ‘smart’.
It does have an input for a remote moisture sensor that is supposed to prevent it from watering if the ground is still moist enough.

I was considering coming up with something where, instead of the moisture sensor, I have a wire connected to something that gets weather forecasts and status - and turns it on/off on that basis.

But then I procured, for $50, a brand-new SkyDrop controller.
After the RainWave device gives out, which these things do eventually (though this has lasted well beyond the Melnor and other single-zone controllers I’ve owned), I will get new valves and hook it up.

What I don’t get is the need for backflow prevention. My inground sprinkler lines are all auto-draining; the moment pressure in the line decreases beyond X, the auto-drain valve in the line releases and all water drains out (the valves are at the lowest point in those lines). This also has the happy effect of eliminating freeze issues, so the lines only have to be a few inches below ground.

So there is no instance where there would be pressure forcing water back into the spigot, and even in the unusual circumstance of a siphon effect there would be no water in the lines to backflow. In essence, those auto-drain valves do the job of preventing backflow.

Yet the code for the system demands a backflow preventer.