I bought two of these Fibaro Motion Sensors because I had heard good things. My personal experience has been that Z-Wave devices were way more finicky and require more effort to pair and maintain. But the big sticking point for me was that the UI for these devices inside the SmartThings iOS app was sloppy and inconsistent.

I decided to take a drop of the current DTH made by fibargroup and modify it to look and feel more like a well behaved SmartThings citizen. 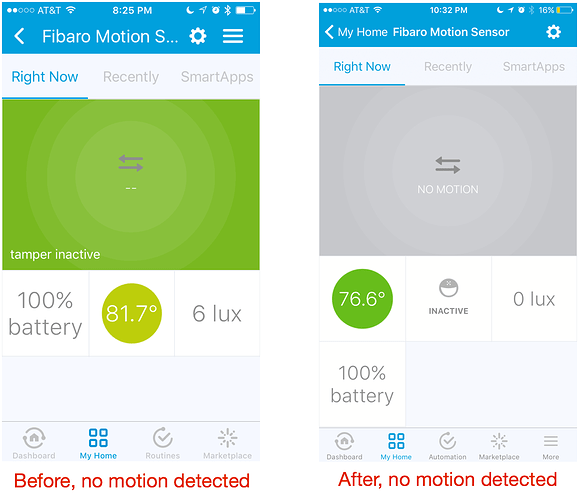 I looked at that one, but couldn’t tell why it was any better than the one made by the OEM. I have no idea what the “sync” button does and the settings I haven’t had any reason to change. I guess I can merge them all together … But that sync button is kind of ugly and I don’t know why it’s necessary.

There is nothing to control once parameters are set, so unless you sit there waiting for the excitement of motion I don’t get it?

I’m actually a UI designer, so the messy and inconsistent appearance bugs me even if i don’t ever look at it. But as it happens, I do look at the temps all the time. In fact, I wish that ST would make it so that you can pick not just a “favorite” device for each room, but rather make a custom tile or dashboard that shows what you want. I’d have the temp information for each room shown at the top if i could.