Has anyone actually created integration of it with SmartThings yet?

Looks like a couple of retailers just got it in stock, you could place orders late Thursday night. I doubt if anyone actually received one yet, but soon.

I ordered one from zwaveproducts.com earlier today. I will report back once it arrives and get it hooked up with ST.

@johnzanussi @Jonathan_McGuire
Is this actually shipping?? Amazon says “Currently unavailable” and zwaveproducts says “out of stock”.
Both have been showing the same thing for quite a while now …

Mine says shipping on June 29 from Amazon before it went “currently unavailable”.

It was shipping on Friday and sold out again on Saturday! But some community members did get orders in, so hopefully we’ll get some field test reports soon.

Any expert to take on the challenge to write the device type for this? Here’s the literature and command sets:

It was available when I looked and ordered on Friday 6/26. Shortly after ordering it went back to being “out of stock”.

Current status on the order is “Warehouse Transfer”.

Looks like this will probably pair as one device with two endpoints and two association groups. So you will get a low battery report when the wireless button runs low even though the chime is plugged in. Device class is generic siren with switch capabilities.

I’m a little bit confused, though, because there’s a pairing step between wireless button and chime, which isn’t usually used with endpoints. But possible.

Separately, if I’m reading this correctly, the design is intended to let you have one doorbell press trigger multiple chimes (that’s what the lifeline association group is for, it’s also used with smoke alarms). If so, that’s pretty cool.

But you never know if the documentation is fully accurate until you try.

The question Is whether it will pair. Mine says will arrive between today thru July 3.

Pair to the hub?

It should pair as either a siren or a switch. But if it really does treat the wireless button as a separate endpoint rather than a separate device, you may not see that endpoint without a custom device handler.

Yeap, I meant pair to the hub. I really hope that this thing works. My current door bell is hell obsolete. 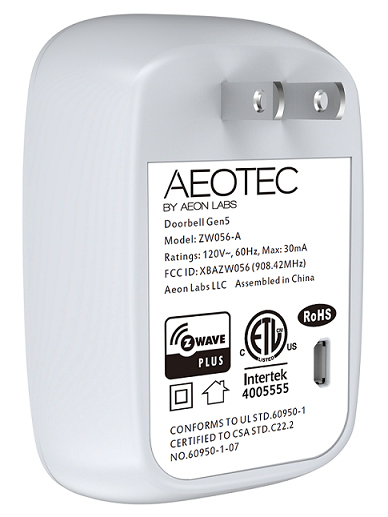 Aeon Labs Doorbell supports playing MP3 music files with a press of this doorbell. It has a 128MB flash memory that can store up to 800 ringtones. The volume can be adjusted manually via short press on the Volume Button, also you can switch the...

@johnzanussi @smart @JDRoberts How much did you pay for it? Price seems to have jumped up from $49 to $89 …

anyone get it to pair yet?

Cancelled the order as the seller said the last one he was sending to me was defective. Go figure! No idea when the next batch will be available. Will be out of country end of this month for a few weeks! Didn’t take a chance.

The door bell listing on Amazon seems to have disappeared …

Also gone from their site:

Has anyone been able to purchase this item?