Doorbell that uses Z-Wave to not just notify you when someone is at your front door, but that can also adjust your lights and security when they are.

They probably make 5 devices at a time, then another 5 and so on…: )

any chance to find this doorbell ?
I just bought the alarm but it’s a pity that you can’t just purchase the button and have the alarm do the same sound as the doorbell…

Just order one from amazon here. 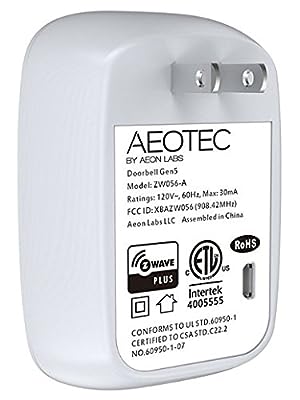 Aeon Labs Doorbell supports playing MP3 music files with a press of this doorbell. It has a 128MB flash memory that can store up to 800 ringtones. The volume can be adjusted manually via short press o ...

just chatted with home controls inc lady that is selling it thru amazon, and they’re out of inventory… two weeks out.

It’s back in stock again on Amazon, but not on Amazon Prime. I’m scared to order it from a third party seller without knowing if it will pair and function. Anyone else willing to try? It’s back on Amazon for $58 + $7 shipping today.

It’s Amazon. If it doesn’t pair just return it

Someone had mentioned earlier that they reached out the company selling it via amazon and they didn’t have it in stock event though amazon showed that they did.

Amazon is currently showing:
Currently unavailable.
We don’t know when or if this item will be back in stock.

Some retailers are showing this in stock this week, so check around. Also check the deals thread as prices vary a lot on this one:

Hi all! I’m new to the home automation and SmartThings world, but I’ve been looking around the forums for a couple weeks and have put in my first few sensors, switches, etc. So far so good! However, I’ve thought to myself a few times that it’d be really helpful if there was a thread that people could post to when they come across unique deals and really good pricing on items. For example, the Best Buy PEQ deal that was going on for several weeks with $19.99 sensors (discounted from $39.99) would have been a great one to make everyone aware of. The thought would be this is more for deals/discounts than it is for “what’s the best brand of ______.” That’s a different topic for a different thread. If someone is aware of a thread like this, I’d also appreciate a link to that so I’m not duplic…

Amazon is showing it’s in stock from The Smartest House.

I’m curious to know if if you can get a second button and have the one bell work with both. I need to replace my bell but I need a button at both the front and side door, as they’re pretty much used equally by friends/family and the UPS guy.

I succumbed to my HA addiction and ordered one early this morning. Within a few hours, I got an email that it has been shipped. There is no device type in ST for this. But the siren “may” probably be recognized by ST as Aeotec Siren. I don’t think that its going to work as it is unless there is a proper device type.

I ordered one yesterday also. Got the tracking this morning. I currently have the Aeon Siren which works well with ST. Hopefully the device type between the Siren and the Doorbell is not much difference.

I ordered one yesterday also. Got the tracking this morning. I currently have the Aeon Siren which works well with ST. Hopefully the device type between the Siren and the Doorbell is not much difference.

The doorbell should be equivalent to the siren, the issue is going to be the separate push button.

In the first set of specs I saw it looked like that was going to be an endpoint on the device. Historically multi endpoint devices have required custom device types.

But it may work like the “add on switches” where the button isn’t a Z wave device at all, and is just viewed as a remote for the doorbell. It doesn’t have its own device In smartthings. If that’s how it works, it might work exactly off the siren device type, only not exactly how people expect it to work when they buy it. ( that’s how the two gig pushbutton works.)

So we’ll just have to see once some people actually have one.

Mine is set to arrive sometime tomorrow, I’ll play around with it and report back.

There is no device type in ST for this. But the siren “may” probably be recognized by ST as Aeotec Siren. I don’t think that its going to work as it is unless there is a proper device type.

I have the Aeotec Siren with five different tones and three volume levels, but currently you can only set that in the preferences of the device type. You are then stuck with that sound and volume for anything that triggers it and cannot change it on the fly. I wonder how you would choose out of the 100 different MP3 tones that the door chime is capable of and whether or not you can change it on-the-fly depending on the circumstance. I’m guessing you could use it as a cheap Sonos to announce different events with different MP3 sounds with the right device type and smartapp.

I bought it out of my addiction.

I have the same siren and the same woes. It remains in ST land but not tied to anything as I don’t want to p**s off my missus anymore till things settle down in ST.

It remains in ST land but not tied to anything

I just use it on the lowest volume and the door chime sound to play whenever I get the mail. Works pretty well but kinda wasteful of $50 just to do that…I must be addicted because I’m looking for any reason to automate stuff…haha…so far, the only place I’m not allowed to get into is the kitchen…so now I’m looking at my small walk-in closet because I left the light on the other day forgetting that it wasn’t going to shut off by itself.

SHM and the siren devicetypes really need to be local. Even if it triggered from cloud devicetypes, it should run local, trigger the siren local, and turn off locally.

And even better, it should warn the user that if cloud interactions are used, that triggers or the ability to use cloud devices to turn it off may be compromised. This way inexperienced users would be educated, and experienced users could setup fairly robust alarm systems that relied on local processing only.

Mine pairs as a Siren (just as you guys guessed) but I must have a dud, my wireless button does nothing. It lights up fine when I press it but does not activate the doorbel. You can’t pair it separately to the hub and there is no way to pair the wireless button to the Siren that I can see. Since Aeon support is non existent this one may have to go back. I will call the retailer on Monday and see what they have to say. Until then maybe someone else can give you more.

Ok I have had problems with Aeon in the past but man did their support come through on this one, received an email on a Sunday morning, thanks to them and The Smartest House for getting this thing out so quickly!