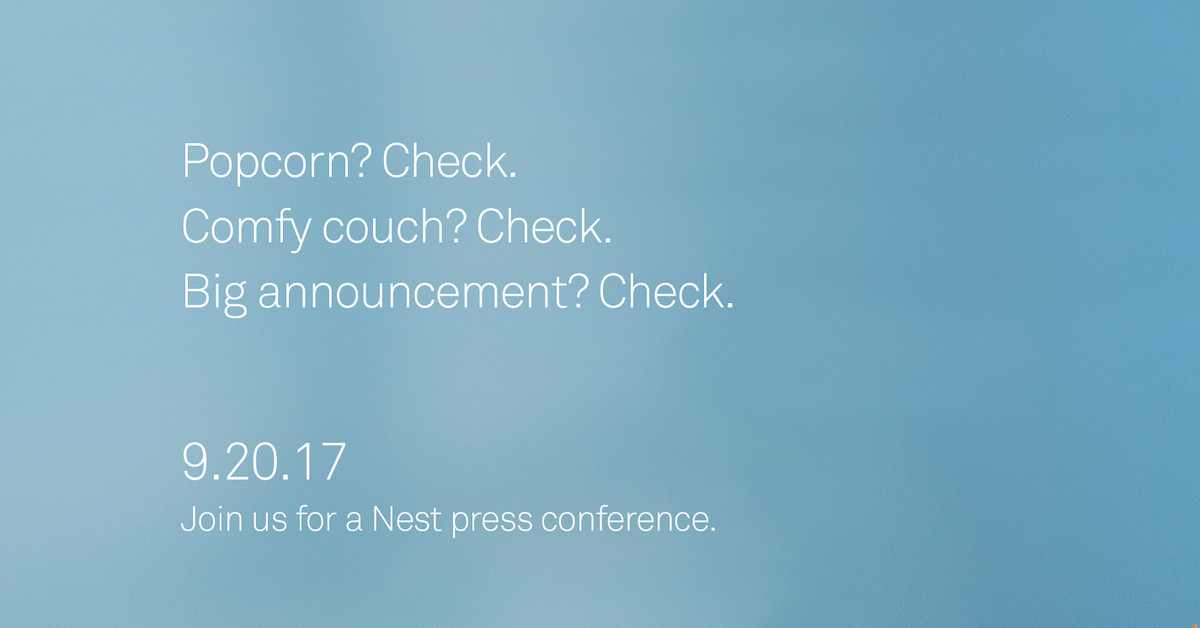 The invite mentions a couch and popcorn. Maybe Nest is preparing a product for the living room.

This event is tomorrow…

Well, we know one thing… Nest does not know how to live stream their event on YouTube.

DKLlTcDU8AAu3yy.jpg1200×900 193 KB
The security system comes with a small keychain called the Nest Tag that lets you tag in and out of the house by hovering it over the Guard

Protect your whole home with the Nest Secure alarm system

The Nest Secure alarm system is a new security system for your entire house.

I like the design of the keypad and the fob system would be nice for my kids. But honestly, the biggest thing I’m jealous of here is that Nest clearly has an alarm delay setting, which is something ST should’ve had years ago.

More competition which is good for consumers

With this news, I’m betting that Yale will finally release it’s “Linus” lock which was ready over 2 years ago for direct Nest integration.

This eco system might be missing a lot of the compatibility with other devices and the automation that ST brings, but from a security standpoint with the thermostat, protect, cameras, doorbell, locks, door / window sensors. I can live without the autmation and added nightmares that ST brings with all it’s failures, dropped devices, crappy app, firmware upgrade failure after failure, lol. Just an extra migraine I can do without. The simplicity of this system is greatly welcomed. Rather have a closed loop system with less flexibility than whatever ST claims to be. For $99, you definitely get what you pay for in this case, lmao, let’s integrate it into a router for $399 with the same flaws and unreliability and we will be set, lmao, thanks, but no thanks.

I probably won’t opt for the security system as l got SmartThings unless there is some super seamless integration.

But the Nest Outdoor IQ looks interesting along with the doorbell the just took on Ring.

I wonder if they are any poe adapters to power the Outdoor IQ? I use a 5V USB port adapter to power my current outdoor cams

I did not see anything about z wave or zigbee antennas installed. I don’t think they will integrate with smartthings but just because it’s Google does not mean it will work perfectly out of the box. Me personally, I’m not a Google fan so I will not be buying them.

I probably won’t opt for the security system as l got SmartThings unless there is some super seamless integration.

But the Nest Outdoor IQ looks interesting along with the doorbell the just took on Ring.

I wonder if they are any poe adapters to power the Outdoor IQ? I use a 5V USB port adapter to power my current outdoor cams

I doubt we would see any POE stuff in the consumer market, since this is generally enterprise geared. POE is a much better implementation then WiFi/Power or battery operated devices when it comes to security though.

Looks like some nice equipment though and always welcome new competition.

ST is anything but a Security system. HA, or maybe HAHA (Half Assed Home Automation). The only reason ST is worth anything in the HA arena is due to all of the custom Smart Apps that the community developers have created and contributed.

It’s not zigbee. It’s the same band, but so are Wi-Fi and Bluetooth. In this case, it’s almost certainly nest’s proprietary version of weave since that’s what the other Nest devices like The thermostat and the nest protect smoke alarms use.

Welcome to Nest support. Learn how to install, use and troubleshoot your Nest products. Get help articles, diagnostic tools, videos, and contact info.

Nest Protects operate on a Nest-developed protocol called Nest Weave that uses 802.15.4 and Wi-Fi 802.11 b/g/n. This combination allows multiple Nest Protects to remain connected to one another even if your home’s connection to the Internet stops working. Nest Weave was developed for its reliability, security and minimal power consumption advantages.