Buying a condo under construction. Just got told I am meeting with the “wire guy” tomorrow. If I want to buy Smart Things version 2 when it comes out… what should I have done now? What about an alarm system… I really would like one I could control from my phone as part of the system… Suggestions? Thanks Ginny…

Run Ethernet all over your place, every room, like telephone outlets. I kid you not. The best thing you can do. You can decide on the devices later and of course what @ehoffman73 suggests below about zwave switches.

I wouldn’t rely on ST for alarm stuff quite yet…Smart Alarm is a great program but I myself still kept my ADT installation while I built ST around for everything else and may end up putting a siren in. Response by actual police, etc still has value to me even though ADT is a bunch of crooks themselves…errr, I mean, overpriced bandits.

For wiring, I suggest using zwave switches and outlets in appropriate places. Don’t plan to put in smart bulbs anywhere you may have someone in the house actually using the real switches to turn stuff on and off. A lot of my install is zwave switches and outlets and it has worked very, very well with 3 kids and the wife…they can operate like they normally do but I get the advantage of all the automation.

You’ll find several “building a new home” topics in the forums that should give you some ideas.

That said, it’s important to understand that everyone has different requirements for peace of mind when it comes to security systems.

For me personally, my minimum requirements for something that might be used in a life and death emergency is that it work when the power and WiFi are off, that it be professionally monitored 24/7, and that it communicate with the monitoring center via cellular, not Internet. SmartThings misses on all 3 of these points, so I use a different system altogether for security.

But there are other people who just can’t stand the idea of paying a monthly fee, and who believe they can monitor their system as well as a paid center. So they have a different priority list.

Here are a few of the more recent “I’m building a new place” topics to give you some ideas:

Hello Everyone, My name is Direwolf20, and I’m currently building a new home, it’ll probably be ready in September. As such, I am waiting for the new Smart Things Hub 2.0 to get started with home automation. Currently I have almost 0 experience here, but I work in IT by trade (MCSE) and have some programming experience, so this is right up my alley :). That said, I plan the following, and was hoping for some feedback from you, the community, who know loads more about this stuff than I do so far ;). I’ll be working with an electrician as my new house goes up, so have the opportunity to get stuff in before walls go up, etc. I’m hoping to get a few things in first, and then add more later, as I find new an interesting things I’ll want to do. Heres my first phase plans. Your feedback is…

Hi Everyone, I am having a house built and am working on my HA design so I can get things set up during the build to make the install a little cleaner. I have decided to go with ST for the HUB but could use some help on how to accomplish the level of automation that I am looking for. I have spent a lot of time on this forum learning and think I have a good idea of what to do but would like the advice of some of you that have actually used this stuff (I have only read about it). I would like smart locks on the front door and door to the house from the garage, automate both garage roll up doors (via Evolve LFM-20 relay and multi sensor), irrigation system (just backed the Eve on Kickstarter), thermostat (lots of questions about this), landscape lighting, porch lights, interior lighting (fo…

Newbie with a New House - Any Help Appreciated General Discussion

I purchased a Wink hub, and then after reviewing this forum, decided that this was a better route for me. One thing I liked about the Wink is that it seemed to be easier for a non-code person to set up “scenes” and other actions, but I do think I am savvy enough to at least copy and paste what is being provided in here. Plus after seeing a few “Rule engines”, I feel much more comfortable. Is there anything I can get started with now while waiting for my hub in the mail! Can I access anything online yet or do I need to wait for the unit? I can’t wait! I have purchased my first home and there are some changes (small remodels) I am doing to the house. I am wondering if anyone has any general comments on things I should consider while making changes as they relate to a smart home. Fur…

Meanwhile for the shortest answer: you want lots of Cat6 cable and lots of power outlets in every room. You want neutral wires available at all the light switches. You want both power outlets and cable both high and low in the rooms (high so you can plug in things like motion sensors and speakers.)

Cable and wiring is cheap to do while the walls are open, and literally hundreds of times more expensive to add later.

Run Ethernet all over your place, every room, like telephone outlets. I kid you not. The best thing you can do.

Yeah, I second that. I only ran ethernet and cable to 5 rooms, and 10 years in they aren’t the rooms I want it in now at this point since things have changed with a growing family, etc. LOL

Since the hub (v1 or v2) will only have an Ethernet port, I’d ensure you’ve got a LAN port in each major room in case you need to move the hub around.

As for an alarm system, I keep mine separate from ST but I know others have done integration. I can still control everything from my phone by using an EnvisaLink 3 from EyezOn. Personally I use a Honeywell system with all hardwired devices.

Also, plan for outlets properly, especially so you can have battery backup units in close proximity to your gear.

Hi @jgirvine, I am building a house also (one of the linked threads is my set of questions). One thing I don’t see mentioned in here is that the V2 hub will have video streaming functionality that wasn’t possible with V1. For that reason I will also be running CAT6 to 4 locations for POE cameras. That may be something you want to consider. Foscam has a number of options and they seem to be pretty helpful, though I haven’t purchased anything yet so I have a pretty narrow view on that so far.

I would also suggest putting some thought into where you are placing your hub, router and switchs. There are a few good threads on how the radios are positioned in the hub V1 and explain what types of interference to be aware of for the different radio types (I really hope they do something similar for V2). I certainly get that I may have to move my hub to another location later but I am still crossing my fingers that my planning for WiFi and HA coverage works out.

Good luck, and if you learn anything good please share!

It’s a good idea to place your hub away from the rest of your electronics, especially wifi and other rf devices. The ideal location is central within the space where controlled devices will be, and high up. So when you run all of that CAT6 wiring, think about that spot as one to get wired, and to get an AC outlet. Mine is on a high shelf in a closet that happens to be central to the house.

I use all cat7 because it is flat and shielded. Hardly couple of dollars more.

Tons of these in various lengths and colors

BUT THE FLAT VERSION OF THE ONE SHOWN IN THE LINK. ALSO AVAILABLE AT AMAZON. And I don’t mix and match 6 & 7’s. Only 7’s. 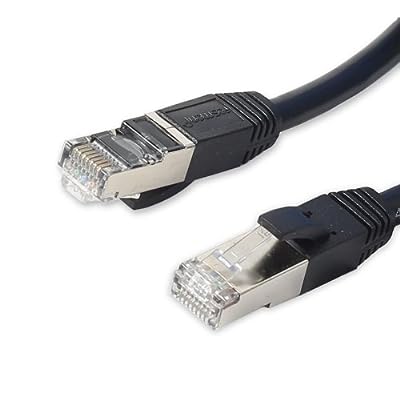 Built for 10 Gbps Ultra Speed The Fosmon Cat 7 Network Ethernet Cable is capable of transmitting data at speeds of up to 10 Gbps over 100m of cable with increased transmission frequencies of up to 600 ...

OP here… WOW !!! Thanks to everyone… I have been reading all this for about 3 hours now. I have 2 pages of notes. Appreciate.

So @jgirvine, did you get everything set up? What worked out great and what would you do differently?

Still under construction. Be a couple of months yet… I did have the network wiring upgraded, had a couple of access points added… other than that, I just plan to come in behind them and change stuff out. Ginny