I’m trying to write a device type, and the only device I have to test is my Android device.

I’m writing a multiAttributeTile, but I’m starting to wonder why I am bothering - so far I have tried the VALUE_CONTROL, and SECONDARY_CONTROL, none of which work on Android.

Is this correct, or am I doing something wrong…

Known issue, but I don’t think anyone is working on it.

Here's a hurdle you might want to avoid if you plan on converting your custom devicetypes to take advantage of the new "multiAttributeTile": Contrary to the 2.0 documentation note that states, [The multiAttributeTile() type option are currently a placeholder. The specified type does not change how the tile will appear.][1] …that is most definitely not true in practice (at least on Android). I was modifying my Nest thermostat device handler using a 'type' of "thermostat" (naturally), but the SECONDARY_CONTROL text would not render… UNTIL I changed to type:"lighting". The same thing happened with my EcoNet vents - "generic" seemed to be the best match, but SECONDARY_CONTROL only worked with "lighting" type.

Further down the page, there is an acknowledgement by ST staff member, @unixbeast, where he acknowledged he was able to duplicate the issue, and reported it. Maybe some day…

Grrrr, ffs. Why the hell isn’t it in the documentation that it doesn’t work on Android. Would have saved me about 3 hours of work and getting frustrated

I’m actually doing a Nest one too for the UK. Changed it to lighting, and the secondary control appeared… No joy for the value controls though.

No joy for the value controls though.

That’s another known issue, and it even pre-dates my report.

Hmmm, no matter what I do I can't get the up / down arrows to show up on Android. are you on android or iOS? EDIT, confirmed. OMG, they don't even have the up down arrows in the Android code. Funny… iOS only then… Maybe this was a bit rushed?

We are still working on making sure there is parity between Android and iOS in this area. I did reach out to the Android devs today to remind them that this is an ongoing issue. It doesn’t help anyone here, but I did put a warning in the docs: http://docs.smartthings.com/en/latest/device-type-developers-guide/tiles-metadata.html#multiattributetile
So as to prevent anyone else spending time on this.

I’m assuming that was after I posted this, otherwise I’m going blind!

I’m surprised it functions like that myself to be honest, given all the coding for tiles is done online rather than being device specific

SECONDARY_CONTROL works for me on Android. I use it on several of my own device types. 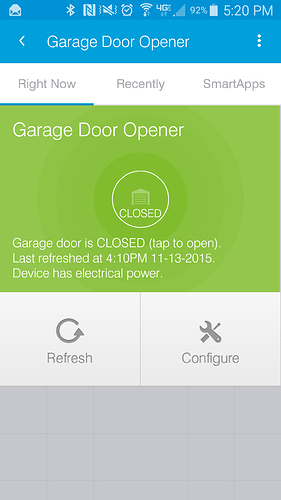 I got secondary control working, however I needed the thermostat type to have the value controls and secondary.

I got secondary working by switching the Type to lighting

Yup, you beat me to editing my post. Type needed changed. I too need thermostat and value_controls. It would really simplify my device type I’m using for thermostats. Plus, it looks good too.

Exactly. I’ve been making/modifying the Nest Thermostat type for the UK. I’ll have to live with this until SmartThings sort themselves out… 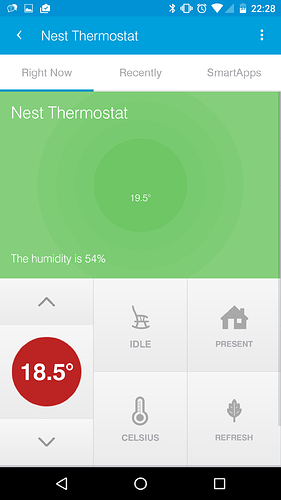 Has there been any progress on this? I’m in the process of updating the Ecobee devices and was leveraging the multiAttributeTile. It works great on iOS but now folks on Android are getting a question mark instead of the tile. 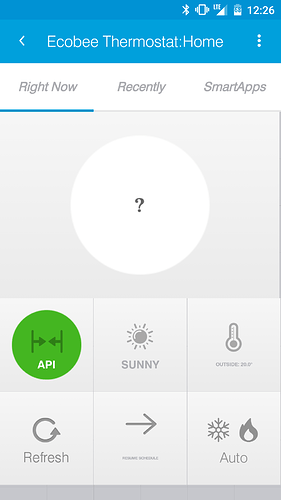 I really don’t want to have to remove the multiAttributeTile, but I also want this to work for all users “out of the box”.

It’s not the best work-around, but try changing the type to lighting instead of thermostat. The only real difference between the two I could see is the little water drop icon for humidity in the lower left. Everything else should work.

Not sure if value_control works for Android yet or not either actually. I have it working on iOS for a custom fan control.