I personally don’t see much value in this as many of us have physical buttons/switches/remotes already. 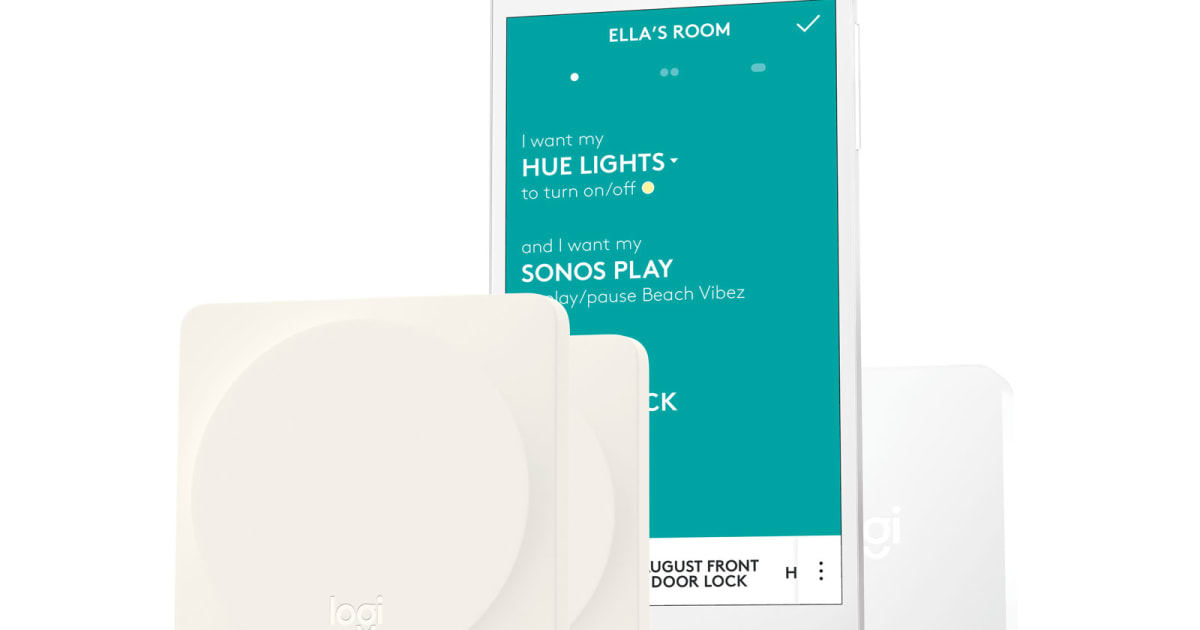 It can even talk to your Harmony hub and start Sonos playlists.

If it allows to trigger specific commands from IR devices, instead of only activties i see some value of it.

Given that they don’t even allow their remotes and apps to have specific IR commands without going through hoops via Activties, I doubt it, but ya never know…

Looks like it’s basically a one-button remote, although the app does offer a few standalone options if you don’t have a harmony hub.

If your remote can control it, the switch can too

But no granular IR commands.

More Details in the following article.

Logitech Pop hands-on: A simple programmable button for the IoT

The modern smart home may be a whiz-bang palace of connected gadgets and smartphone control, but there are times when you really just want to press a button and switch on the lights. Logitech Pop p…

It’s expensive, but I think it’s a good choice for Logitech. The buttons are about the size of the drinks coaster, much bigger then a flic, for example, but that could be good if you have kids.

It costs considerably more than a flic, which already has harmony integration, but the flic requires that an Internet enabled phone or tablet be nearby, while this new button can talk directly to the harmony hub.

It’s always good to have more options, and if you do have a harmony hub, this could be a nice, if expensive, addition.

I liked them when they were smaller and called Flic.

I agree options are good. Between my new BEDDI smart alarm clock and my physical Harmony remote buttons, I definitely don’t have a need for this, but some can perhaps find it in their homes. I just don’t think this is anything revolutionary here and certainly pricey for what it can do for you.

I also don’t like the fact, you need yet another piece of hardware they call a “hub” plugged in somewhere. Unless I am reading this wrong and it can be used with a Harmony Hub instead?

It might be a nice nightstand switch for a child’s room, or a wall switch that could be used by someone with limited hand control. It looks like it’s about the same size as an ADA door button. It’s probably service dog friendly, although it’s going to depend on whether the double tap throws anything off. My dog can use the flic buttons but I had to set all three options ( tap, double tap, and hold) to the same action.

If it sold for $15 each it would be a smash hit, I think. The problem is the $40 price tag. But we’ll have to see what it actually sells for once it comes to market.

I liked them when they were smaller and called Flic.

Smaller is good for some use cases, larger is good for others. I’ve mentioned before my concern that little kids might try to put the flic in their mouth.

The other thing is that the flic requires that there be a phone or tablet nearby. That’s OK at my house, because we have a home automation control center set up on a tablet on each side of the house and we just pair the flics to those. But the Logitech button can be paired directly to the harmony hub, so it would work without needing The phone nearby. Again, that’s good for some use cases.

I was really just trying to be funny. I see your point about the size of the Flics if you have kids. I think the Flic offers way more customization and it’s cheaper as well. I’ve wanted to pic up a couple when they go on sale every now and then, I just really can’t find anything that I truly find useful.

This device appeals to me, both as something my spouse might enjoy using for our automated home rather than the app, and also for our guests who don’t need access to our app, but might find it useful to arm/disarm our alarm system when they enter/leave at night. I can think of quite a few uses for my toddler as well, as a mounted “magic switch” for light and music in her room. I agree with others who note that this is an improvement over flic which requires a phone to be paired, and is not as complicated as a full on remote. I’d preview one. Bummer that it seems we need another hub to integrate with ST system - I was quite happy that my Keen vents didn’t require that.

Bummer that it seems we need another hub to integrate with ST system - I was quite happy that my Keen vents didn’t require that.

edited to update yeah, I was mistaken at first, I thought you could use the Pop bridge or the Harmony Hub, but, no, you always gave to have the bridge. So it does add an additional device. Many people in the community already have a harmony hub.

There are many other button alternatives that work with SmartThings that don’t require an additional bridge piece.

As I just mentioned in the other thread, with a toddler, I would definitely look at these as they will pass the choke test size requirement, which the flics and even the iris button will not. I just hope the price comes down once they’re actually on the market.

I prefer knocki over this one. Just because its more appealing and is cool… https://www.kickstarter.com/projects/knocki/knocki-make-any-surface-smart

I prefer knocki over this one. Just because its more appealing and is cool… Knocki: Make Any Surface Smart by Knocki — Kickstarter

https://knocki.com/ Just spotted this… Has anyone seen this or looked more into it… Positives/Negatives? Possible to integrate? Unique use cases ?

But it’s still pre-order with No timeline.

For sure. We will not know until it comes out. Whats appealing about Knocki is that as per the marketing video it is supposed to have the capability of setting it for different surfaces and the video shows surfaces like granite, wood, dry wall , etc. If it really works the way it is shown to be, then it will be a good concealed way of having a tap-remote for simple functions. But right now the probability of the logitech device working as advertised it lot higher than knocki./… so time will tell what is the best.

The Flic is not a flop. I have six of them and we use them all the time. They are also continuing to sell well. Where they had a problem was that the first batch didn’t pair correctly. That was awful. And it’s true that many people tried those and then returned them. (I returned 3 myself.) but the new batch which came out in late December works very well, pretty much as advertised. And they’ve added several new features in the months since. They also now regularly sell a pack of four for $99 on the manufacturer site, which brings the price down significantly.

We have a tablet on each side of the house as a home automation control center and we paired the flics to those, so they are not dependent on a particular phone being home.

If you’re using music services, the flic does work better with android than with iOS. But if you’re using it with IFTTT or harmony it works fine with both.

We have a tablet on each side of the house as a home automation control center and we paired the flics to those, so they are dependent on a particular phone being home.

This is the key to Flic if you are using them at your home!

Sorry, that should have been not dependent on a particular phone being home. I fixed it in my post above.

I looked at the Knock. The idea of tapping a sequence to turn something on for $130(retail)? Alexa is way more useful and not much more. I could see a few use cased for it though, like front door. With the granite example, I bet the range is not super far with vibration detection.

The Pop is interesting, but again price point is a little high. I would love to see small buttons that you can mount under cabinet/tables for around $10. Minimotes can be had for less than $15

The Beddi (with my smartApp integration with ST) is actually turning out into a sweet bedside replacement for my minimotes. Need to figure out what to do with them.

haha didn’t even catch that. I misread to say what you really meant to say so that’s what why I was pointing it out. Unless anyone wanted them in their car on onthemselves as a panic button, how you have them set up is exactly how they should be set up being tied to a device that is always in the house.