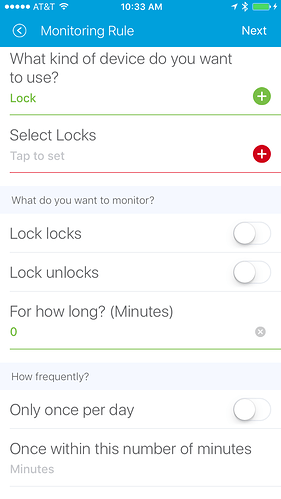 Yessssss! Thanks- glad to see it’s back!

Hope I have it linked to “Right Now” ?

Any chance that this will eventually include the ability to also include information on who (which code) was used to unlock the Lock?

One of the things that I really like about the “User Lock Manager” is that it tells me who unlocked the door.

I agree I would love to see this added to the “Right Now” screen. Can anyone confirm that this is the case?

All I wanted to know are my locks locked on the home screen of smart monitor. What was done is Ok but not what I need. I don’t want a push notice, just see if there locked. Any chance of that?

One more vote for having the lock status added to the “Right Now” page. As it stands right now if I forget that I’ve added the custom configuration to SHM, I can’t tell it’s there unless/until I go to add it again.

Another vote for adding the lock status the “Right Now” page

Add me to the list. Usability and stability should be the most important thing on the minds of everyone at ST/Samsung

Add me to the list. Usability and stability should be the most important thing on the minds of everyone at ST/Samsung

Exactly. One major way to increase stability and response time of ST is to move more things to local processing.

One major way to increase stability and response time of ST is to move more things to local processing.

Honestly, it’s not a simple as that. If it were we would be doing it.

Honestly, it’s not a simple as that. If it were we would be doing it.

That’s unfortunate. Is it a hardware limitation? The apps I have running locally run almost flawlessly. It’s only the cloud based events that sometimes do not perform as expected. I’m sure some of the issues users here in the forums are discussing may even be ISP issues and other things beyond ST’s control, but if the user repeatedly has a bad experience with any product the result is usually the same. Seems like more local processing would alleviate a lot of complaints from the customers if it was only possible.

Yes. We need to have this on “right now” page…Please.

Old post, but I want to add another vote to put locks in the “Right Now” page.

And another vote for lock status on the “Right Now” page.

I don’t know if throwing my vote in here will help anything.

If not, can we get a DTH that supports programming codes and setting options added to the local DTHs? Programming a lock on the lock is a pain and if you have 2 or more getting the codes in sync is important.

A dream feature would be to set additional codes or not have codes added to some locks. I would like to have secure zones in my home that only two of five users can access.

It also would be nice if SHM can check and lock doors on arm state change.