I hope someone here can help me.

I bought an emergency light switch to prevent people from turning off smart lights at the wall (while still allowing me to easily turn them on/off in an emergency situation), and the one I bought works fine in rooms which only have one switch, however as the switch has no common (only two each of L1 & L2) it can’t be used in rooms with two or more switches. Does anyone here know of a switch which does have a common (it’s practically impossible to find information about connections online) or know if emergency light switches simply do not have that connection and I need to find another solution?

I cannot help with the specifics of this. I use these to prevent certain switches from being turned off at my house (in the States). I am sure you can find something similar.

Clear plastic switch lock securely locks any standard light switch in the On or Off position. Protects your VCRs, computers, alarm clocks, and other appliances from being accidentally turned off. Inst ...

Thanks for the suggestions, I was looking for something a little prettier though.

I have found a “2-way” key switch, which might work (although no pictures of the back, so I’m only guessing). I’ve reserved one for click & collect (with a front plate) so I’ll report back if it is the right kind of switch.

I’m not sure why they would be difference if there was more than one switch on the same circuit, but perhaps.

There are some other alternatives.

The two most popular in the UK are probably either to

Two) just use a child safety lock to cover the existing switch. The one that @Ac7ss mentioned is made to fit US switches, but there are ones made for UK switches as well. These are generally very inexpensive. The brand below is popular in the UK, but there are many choices. 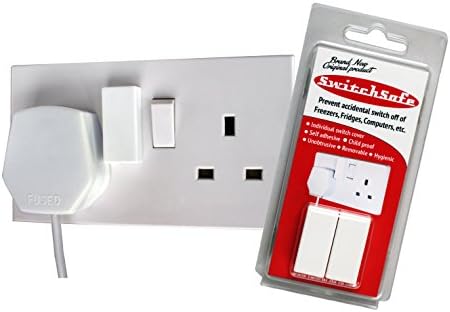 Is this because you purchased smart bulbs vs smart switches or you just don’t want anyone messing with the lights?

Smart bulbs (Hue), so I don’t want anyone “hard” turning them off

OK, so I have bought two different “2-way” emergency light switches and both have a common, so that phrase seems to be the key here.

For future reference, these are the two I bought (along with face plates):

The cheaper one looks cheap and has ugly writing on it, but the screws are hidden when it’s mounted and is totally flat, whereas the more expensive one’s switch is raised up from the plate and has the screws visible and in an abnormal location. Both switches have their own key which doesn’t work on the other switch, however the key I have for my original “no-common” switch works on both of them!

Hope that helps someone in the future!

One thing that annoys me with screwfix though

I love their prices but they quite often sell products without the others that go with them, e.g they do the black switch module but not the black single aperture face plate to put it in

Just another little update. I fitted them both at the weekend and the cheaper “LAP” one (although it has writing) imho looks better, it was also was easier to install and has longer screws for those deep wall boxes. Personally I don’t think the more expensive “MK” switch is worth the extra money.

Here are photos of them fitted.

I prefer the look of the first one…

I prefer the look of the first one…

Mhm, that’s the cheap “LAP” one. Without the writing it’d be perfect I think.