I’m just getting started with these smart devices. I’ve installed a couple switches, but am really intrigued with what can be done. I was trying to install a GE 12722 Smart Switch in my office to turn my ceiling fan on and off. The problem is every time I try and turn the power back on after installing the switch, it trips the breaker right away. I tired putting the switch on the light in the room and same thing. The breaker switch is an Eaton Arc Fault Breaker Type Chaff. I only have a few of these in my breaker box, pretty much all my bedrooms. When i put the dumb switch back in it works as normal. If I install the smart switch in another location without the an Arc Fault Breaker, it works like it is supposed to. Does anyone have any ideas what is going wrong here? I didn’t try installing the switch in another room with the Arc Fault Breaker. Is this a known issue, something unique to me? My house is 11 years old if that matters for anything. Thanks

You need to use the switch specifically for FANS (not a standard light dimmer).
I am using 5 of these with success. 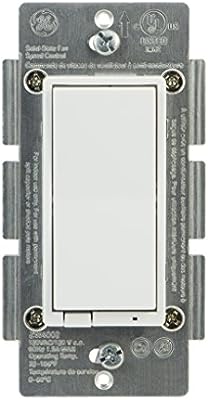 You’re right that there’s a big problem if you try to use a light dimmer to control the fan speed. However, the OP is not using a dimmer, they’re using an on/off switch. That can work fine provided the specs match. It’s possible that the draw from the fan is too high and the switch is overloading and turning itself off. Or it could be a wiring issue.

@Navat604 or one of the other electrical expert’s might be able to say more.

If it is that the draw from the fan is too high, would the Fan Control switch fix the issue? The Smart Switch is listed as 600 Watts, while the fan switch is listed at 1000 watts. Trying to not go overboard with purchase right off the bat, so would like to feel some confidence that this would fix the issue. Thanks

Brand and model of the fan?

I believe it is the Hampton Bay, Glendale 42" ceiling fan.

Thank you for your help!

I hate to open a closed issue, but I’m pretty sure something else is going on here. The GE 12722 is rated for a 1/2 HP motor load which is more than sufficient for your fan (< 1/10 HP). Does your AFCI breaker indicate the reason for tripping? Eaton breakers often have an LED that flashes after resetting. If it is an overload trip, then you may have mis-wired the switch. If it is an arc fault, you should make sure all the connections are good and tight.

Is there a chance that there are two separate circuits in this box and you are connecting the smart switch neutral to the wrong neutral? The AFCI will trip with a detected ground fault if you have the smart switch connected to the hot from one circuit and the neutral from a different circuit.

Your use of the switch should be just fine, so your breaker tripping indicates that something is not right.

Thanks for the correction! I should’ve looked up the specs on the 12722. My bad, I’m tired today.

When I wired the switch up the way I thought it should, it tripped the breaker. I don’t remember seeing an LED flash on the panel. When I switched the load and line wires, the breaker didn’t trip, but the switch didn’t operate the fan, or the light and the blue LED on the switch was not shining. This happened when I got the load and the line wires mixed up on the first smart switch I installed. I took the neutral wire from the dumb switch and hooked it up to the neutral wire on the smart switch. The dumb switches work just fine wired the way they are, but as soon as I introduce a smart switch into the mix is when things go bad.

Other than having an electrician come out, how can I figure out what is going wrong?

If you can take a picture of your wiring I’ll take a look. There are also lots of other threads on this forum that address wiring for these switches you might check out.

I think I see your problem. Dumb switches never switch a neutral, unless you have an old house with knob and tube wiring, in which case you could have what’s known as a Manhattan neutral.

Your dumb switch has 2 poles, load and line. They both should be black but one could be white with black tape or some other marking to denote that it’s a current carrying conductor. Would need some info on the wires you see in the box but you may have fried the switch by putting current on the neutral side.

Can you post a picture of whats in the box?

Ok, the neutral wire is probably the issue as I only wired up the line, the load and the ground. That’s all I did for the switches to work on the other lights that I replaced the switches on in a few other rooms.

Sounds like that is problem to me. You’ll have to dig out the bundle of white wires in the back of the box and add the short white wire that came with the switch to the bundle. The other end of the pigtail goes to the smart switch neutral connection.

You should really go back through the rest of the smart switches in your house and install the neutral. They aren’t designed to operate without it and are only working by chance. They are also inducing a ground fault since the ground is probably carrying the return current from the smart switch.

Hopefully this will get your fan up and going with some extra smarts! Good luck!

That was it, thank you so much for your help!

Jh0 was right on the mark. On another note, I see those switches are using the push in, or “back stab” connectors. Those suck and can be dangerous as the springs can weaken over time leading to micro-arcing. Eventually as the arcing starts eating away at the connection the resistance increases until at some point you get a run away reaction and the connection literally burns out. I’ve replaced numerous switches wired this way observing pitting and even signs of heat stress on the copper wiring.

Also, I only have one other switch installed at the moment, but I will be fixing that one as well.