I know it’s a beginner’s question but thats me

In my case, I’m trying to do that for:
1- zigbee dimmer switch
2- zigbee curtain switch or zigbee window shade as it’s called in smartthings

Nothing directly. It would be nice to know what the zigbee capabilities of your device are though, since you need to list them in the custom dth. Capabilities for curtains might be open, close, half open, slow open, slow close etc. Here is the list of them for ST.

If you’re convinced on writing custom device handlers, here are the docs.

A much faster solution would be to use an already created DTH by the community. Possible solutions here if you haven’t looked already.

In the IDE there are already many zigbee device types to choose that might work with your devices. I’m assuming you’ve already paired your zigbee devices with smartthings and the device handler doesn’t have some of the functions you would like? You could also just add some capabilities to the DTH template for zigbee blinds and publish that for yourself to use as well. 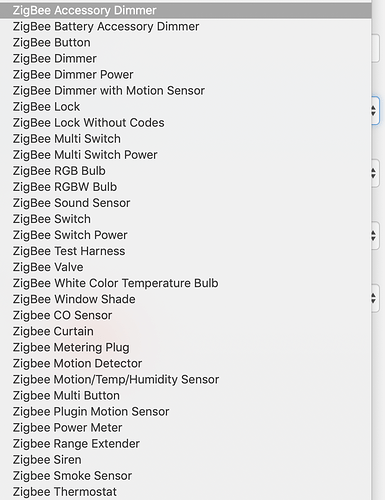 Have you already paired your devices with your HUB?

Yes. My curtain is already setup and connected through the device handler named “zigbee window shade” and it works but that code doesn’t have a separate open button and close button so i would like to add those and also i would like to add a button for half open and the percentage for some reason is 0-255 i wanna change to 0-100

My real issue is with the zigbee dimmer, it was added to smartthings with no issue but it was added as a thing, i changed the DTH to number of choices, and nothing worked.
So i want to get anyway to make it work but i dunno how.
It’s Zigbee 3.0 and i tried to make the code through the templates in the IDE but still couldn’t make it work
Thanks

what is the make and model of the dimmer?

so “Zigbee Dimmer” device type in the IDE didn’t work? Like when you press on, off in the smartthings app nothing happens?

Any update? Have to removed the device and re-paired since?

Yes did it many times. I can’t understand the issue

it was added as a thing, i changed the DTH to number of choices, and nothing worked.
So i want to get anyway to make it work but i dunno how.

I’m sure you’ve tried already but removing the device from ST and then factory reset the switch or at least disconnect it’s power source then reconnect the power to it (zigbee) switch and re pair.

yeah did it so many times. nothing