We switched on to a new electric meter 6 months ago. We were having stable electricity bills since the last six years. I wonder what can be the cause. We’ve installed a home security system last month other than this we don’t have any extra electricity usage. The bill has risen more than 60%. I thinking about calling an electrician Theshockdoctors for getting this checked. Has anyone had the same issue? Should I call an electrician? Is there any way to test it myself? Will it be the problem of the new meter or the old one was not working properly? What is your opinion? Please help………

I’d start by calling your utility company. When there’s a sudden rise like that and you don’t know of any obvious reason like a new housemate or someone having retired and therefore being home all the time or having bought a new air conditioner, then often your utility company can help you do an audit and figure out what’s going on.

Obviously the home security system is a candidate since it’s new. Did you install it yourself, or was it professionally installed? If you installed it yourself did you cobble it together or did you buy a single system? And are most of the devices battery operated or hardwired? If there’s a wired panel it’s possible that it was wired incorrectly but even so it’s hard to imagine it increasing your utility bill by more than half.

I have heard of homes where people have installed cameras which ended up running 24 hours a day when they didn’t realize they would be and that increasing electricity draw, so if you do have cameras that would be another question – – are they set up to only record when triggered by motion or do you have the recording 24/7.

Anyway, at the very least a utility company should be able to tell you whether the increase started at the on the day that you installed the security system and whether it’s been an even draw the whole time or whether it’s spiked up and down. They should also come out and check the meter for you.

If the utility company can’t find anything, and there’s no usage reason, then the usual issue is a faulty appliance. Sometimes a faulty outlet but that’s rare. You would need to bring in an electrician to track that down because it is a major safety issue. But start by just calling the electricity company and having them check the meter and do their own audit and look for usage patterns.

What Can Cause a Sudden Surge in Electric Bills?

Normal electric bills are annoying enough, but trying to identify and troubleshoot the reason for an unexpected surge can be a tremendously frustrating experience. The question is always whether there’s something “wrong” or your bill is right because...

Got any neighbors growing pot?

How to Tell If Your Neighbors Are Stealing Your Electricity

Stealing electricity is not only a crime, it's also extremely dangerous. Across the United States, electricity theft costs approximately $6 billion a year. Every year people are killed or injured due ...

You can integrate Wattvision with SmartThings - it may help you second guess the utility company and target loads turning on and off.

If your original electric meter was the old analog type, the one with a rotating disc, those can slowdown over time due to wear. A meter that is over 10 years old can slowdown causing it to under read by 4-10%. I have never seen one slow by more than that but I suppose its possible. One way to test the meter is by disconnecting everything except for a known load. Example: a 100W light bulb is a known load. A space heater can also be used provided you know what the draw is. Anything can be used but having a higher load makes for a quicker reading. Example: 1000W for one hour should show 1Kw of usage on your meter.

Also. I have found those clamp on energy monitors that measure load are notoriously inaccurate unless it is able to connect directly to the line to measure the voltage. The two readings are necessary for an accurate calculations. The devices that just clamp on assume the voltage of 120v but if the real voltage is down around 110v your reading will not be correct.

On a single phase there can be a difference in voltage between the two hots, perhaps due to the windings, temperature or the load of the step down transformers or the temperature.

The power company has monitoring equipment they can connect that will give lots of information such as spikes, sags, voltage and load. These devices keep detailed logs of all that information and are very accurate. I have seen them used in industrial settings but I am sure they could monitor a simple single phase home.

Also a Kill-a-watt meter is invaluable. Cheap and easy to test all but your 220v stuff. I keep a spreadsheet of all electronic devices in my house that I’ve run on this for at least an hour. I know the average kwh draw of everything. Stuff that varies may have an average of up to a week depending on how critical I think it is. 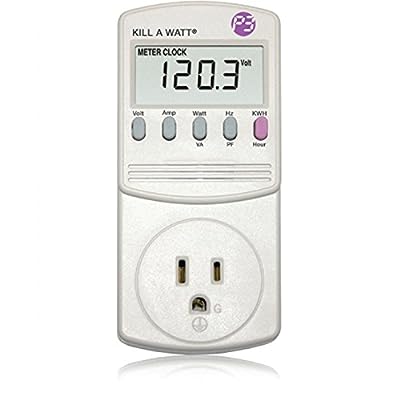 Empowers You to Save Hundreds on Electric Bills Electricity bills are rising. Now you can cut down on costs and find out what appliances are actually worth keeping plugged in. Simply connect these app ...

I’ve also read in the past that some old meters only measured one of the 120V legs and assumed the other leg was balanced. So they essentially just took the measurement times 2.

Your panel has two 120V legs. If you had most of your heavy loaded 120v items on the non measured leg, you were probably reading lower than the real usage. Maybe your window air conditioner and fridge were on that leg. Your 240V items use both legs at the same time so they were probably being measured correctly.

The new meters measure both legs all of the time.

I’d call the utility and have them check the meter, check the billing measurement method and have them do an electrical audit on your house. Most utilities will do this for free.

Your old meter could have been slow, I work for a water authority and sometimes when we cgangeameter the customers bill jumps up. Could be the new security system. Have you been running the ac a lot more?

Does your utility use demand pricing? New meters let them charge different rates at different times of day. Possible they are now charging you more for electricity at times when you are using lots.