So, I got the battery email and pulled my hub open. What a mess- battery residue everywhere. I opened it up some more to look at the PCB and check for damage. There was acid damage in a few spots. Very heavy in one spot near the (z-wave?) radio module, and lighter on the other side near the power and ethernet connectors.

What’s the latest on replacing a V2 hub? Do I still have to recreate EVERYTHING from scratch? The hub is working now but I don’t have much confidence that it will continue to do so. 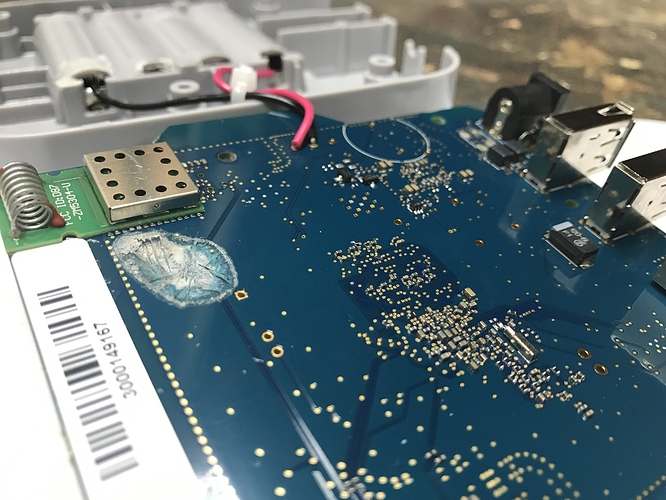 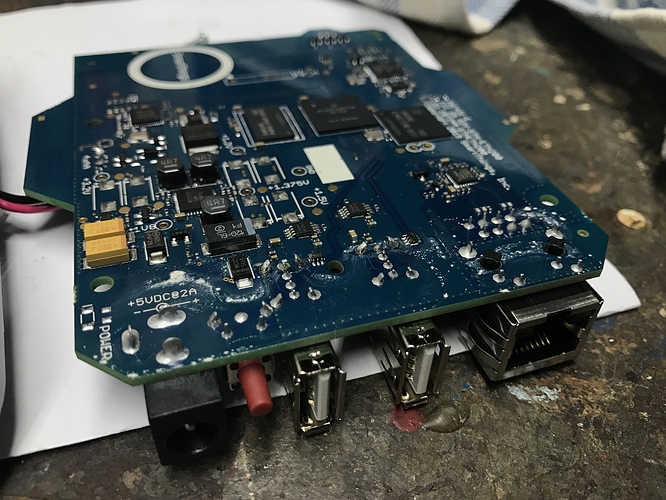 What’s the latest on replacing a V2 hub? Do I still have to recreate EVERYTHING from scratch?

There is no backup utility, so yep everything needs to be started over unfortunately. If everything is working after you clean up that stuff, then just keep an eye on it for a while. Document what you’ve done and save it in case your hub dies and you need to pursue ST for a replacement due to this issue.

If you haven’t already, please contact support@smartthings.com (and include the above image). The team can walk you through the options.

All hubs need to be replaced. This is clearly a hub issue since all brands of batteries have leaked. This is not a one off or limited issue.

All hubs need to be replaced. This is clearly a hub issue since all brands of batteries have leaked.

There’s no doubt it’s a hub issue. The question is whether the firmware patch they’ve released is going to prevent this from happening in the future or it’s a hardware issue, in which case all hubs have to be recalled.

Any reason to run the hub with the batteries? I don’t have batteries in mine and have the HUB plugged into a WIFI enabled switch so I can remotely power cycle the HUB. Not really sure what the batteries are for.

Samsung owns ST.
Samsung had battery issues in cell phones.
Samsung replaced those phones.
This is not a consumer problem, it’s a corporate problem. they need to resolve this.
It’s easier to replace hubs now and keep customers instead of more litigation and bad press.

There are also ST users that do not come here and read what’s happening. They don’t know to check their batteries. They may or may not have received the email (or even read it if they got it) about replacing $5 to $6 worth of batteries that are leaking and therefore destroying their $99 hub.

In case of a power outage your hub will continue to be up, some users have WiFi with battery back-up also. Mine is battery-less since they leaked. If my power goes out in not worried about ST features so much.

The PCB doesn’t look damaged or severely corroded. It’s likely the lacquer protected the board as it should have. If the hub is still working, I would just keep using it. Swapping hubs is a huge hassle and not worth it in this case IMHO.

I would clean and neutralize the alkaline with CLR similar to cleaning a car battery with water and baking soda.
I usually mix 50/50 with DI water and use DI water to rinse but you could use just very clean water and use rubbing alcohol to clean any contamination left from the water.

I recommend using isopropyl alcohol and an acid brush. It looks like it’s just concurs coating damage, which is ready to fix. The board has a lacquer coating. Once thou clean th he corrosion, set the biased on its side with the damage at the bottom. Using a clean acid brush dab excessive alcohol at the top of the board and let it run down. Allow this to soak the board. This will soften the coating and allow you to brush from the covered area to the damaged area. Once dry the coating will be back in place.

If you do not want to do it that way, you can use clear finger nail polish, or spray on lacquer from the store.

I’ve used all of these methods for 25 years in electronics repair of pcb boards.

It was a firmware issue not a hub issue

That sounds good, except I reported overheating and leaking batteries almost a year ago. I took the recommended action of removing the batteries and using UPS.

That sounds good, except I reported overheating and leaking batteries almost a year ago. I took the recommended action of removing the batteries and using UPS.

Yeah… I never even put the batteries in mine… No UPS… I do have a generator… and when the power is out I’m not too worried about lights… I worry about the deep freeze and the fridge.

I worry about the deep freeze and the fridge.

But how will you know they aren’t working if you don’t get notification from ST ?

I’ve got 10KW generator , UPS are for those power blinks/surges and to not have to have everything reboot when switching from grid to backup & back.

I’ve got 10KW generator , UPS are for those power blinks/surges and to not have to have everything reboot when switching from grid to backup & back

The last time I lost power in this house was… Oh… Never have in three years… But I never talk due about being posted. I would have a while house generator if I honestly thought there was a need. But, we are prepared to live without electricity if need be.

My father in law came to stay with us on Hospice. So I needed generator for his medical equipment just in case. Last time I actually used it was back in 2015 power was out for a couple hours overnight. Other than that I cheaped out & have manual switch. So if power goes out I give it a few minutes. Usually by the time I go out, start it up , come back in & flip the switch line power is back up.

So, ST support responded to the case that I submitted. The hub is over a year old and out of warranty, so I’m on my own! Go buy a new hub and start from scratch.

I think I’ll definitely go buy a new hub, but it won’t be a SmartThings hub.

Not surprised.
If it still works then I would just clean it as I or @bamarayne had sugested.
It should continue to work for very long time.