Will there be a driver for RGBW CWS bulbs like the Ikea GU10 bulb i have or Sengled white colour temperature bulbs?

Those won’t connect up with any of the existing Edge drivers I have installed.

In firmware 42.x the libraries are already available to convert the currentxy attribute values to hue and saturation and vice versa.

In the drivers in the process of being accepted the zigbee Switch driver that has the subdriver for ikea xy CWS bulbs, but it only has these models.

I could add it to my driver and add more models and manufacturers, LIDL and I don’t know if sengled uses color xy attributes too.

If you help me prove it, I don’t have those bulbs

I would need the fingerprints and I would do it in a few days, I’m a bit busy right now

You guys should fix this problem first, before forcing to edge driver.

Yes, these switches are widely used among SmartThings users here in South Korea. Most of smart wall switches that I have are Dawon switches.

Note, this transition marks the start of a gradual process that will initially include a small number of devices but will expand to cover more over the coming months.

Assuming I have installed devices which match the edge drivers in this first driver rollout, or a future rollout, if I uninstall and re-onboard the device, will the edge driver be installed on that re-onboarded device or is there some sort of change that need to be made to my hub to prompt this update?

If the first question is answered in the affirmative, is this the only way to convert existing devices or will there be an ability to download edge drivers that will covert those installed devices?

I see that there is a Zooz driver. Is this in the first rollout, and if so, can I install the my Zooz Zen17 relay and have it running local?

You can always use Virtual Things Edge Drive in order to create a virtual switch and simple automation in order to control control each button. Read here:

Thanks to @ygerlovin for his work

I’m already using this method for multi switches in my home.

Actually, you might need 2 or 4 ST automations per pair, to mirror switches. and it would require more than 20 automations.
So, I’m using rules api and GNU Makefile to simplify mirroring of those switches. But, as you know, using rules api is not an easy solution for ordinary people.

@iquix
I think adding mirroring state for routines will solve it. However, whether ST team is planning this feature is another question.

Trying to install Ikea Fyrtur blinds but it installs using the old device handler not the new EDGE driver.
Is there any way to force the new driver ?

I see that there is a Zooz driver. Is this in the first rollout, and if so, can I install the my Zooz Zen17 relay and have it running local?

If you have it paired to your hub today, you can look at the info in the Groovy IDE and see if the fingerprint is listed in the z-wave switch driver

I’ve looked at the FAQs using the link and find it all very confusing. I hope that ST has plans to make this simple (or even automated) for the less tech-savvy amongst us. Why should I have to use developer resources which are beyond my limited skills?

Do users need to continue to be enrolled in the Beta program, or are the default Edge Drivers now loaded for everyone over 000.038.000XX on Hubs V2/V3/Aeotec?

Second question - Can users install Custom Edge Drivers without being enrolled in the Beta program? I realize they’d still have to install the custom Edge driver.

You don’t need to be on the beta program to use Edge Drivers.

I have converted most of my devices to Edge Drivers and I am not in the Beta program. I have even made some minor changes to edge Drivers with community help and installed them for my own use.

Starting on Tuesday, April 26, new devices onboarded to the SmartThings platform will begin to be backed by Edge (Lua-based) drivers.

It’s the 26th, but a newly connected Osram Lightify (Sylvania) BR30 ziggby smartbulb does not appear to be using the Edge driver after onboarding since there is no driver option on the triple dot menu.

Yeah, it seems Edge for new devices isn’t live yet. Just excluded a Zooz zwave switch from a hub without beta firmware in it. After re-adding it still used a standard Groovy DTH even though the fingerprint is in an Edge driver.
Groovy fingerprint:

Yeah, it seems Edge for new devices isn’t live yet.

Is the general assumption that when ST said they were beginning with a small number of devices, they actually meant every single driver that was already in beta? I was thinking they might start with just one or two drivers and take it slowly.

Certainly I have devices using beta drivers that are not ready for production with those devices yet, as well as ones that used stock DTHs that are not in the Edge equivalent.

Ive been sort of wondering for the last 2 days about the Hue Bridge are we going to have to delete/re add it or does it even get a driver?

What is SmartThings going to do with my 40 or sensors that are already added? How are they going to convert them from groovy to edge?

Starting on Tuesday, April 26, new devices onboarded to the SmartThings platform will begin to be backed by Edge (Lua-based) drivers. Note, this transition marks the start of a gradual process that will initially include a small number of devices emphasized text but will expand to cover more over the coming months.

Ok then, not knowing what small number of devices actually include, I just ‘enrolled’ and installed both versions of the Virtual Edge drivers previously mentioned that were created by developers other than Samsung to start this Edge journey. So, where do I find all the current Samsung SmartThings created Edge drivers to enroll in?

Is the general assumption that when ST said they were beginning with a small number of devices, they actually meant every single driver that was already in beta?

That’s what I had assumed because the link in this section of the FAQ goes straight to their Edge driver repo on Github. Maybe @Khoeye can update us. 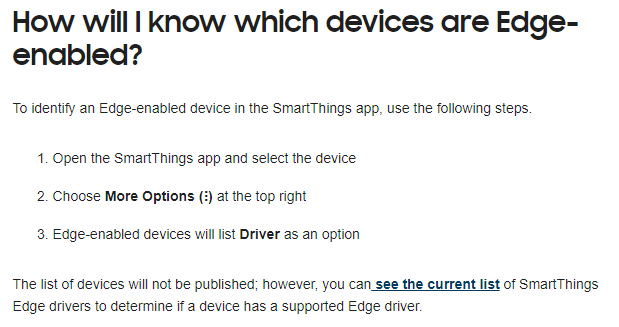