I am trying to install a set of a GE Z-Wave 3-way switch and GE Z-Wave add-on switch in my laundry room but am having some trouble deciphering the wiring. My wife is ready to kill me so before I call an electrician anyone have any suggestions?

I have two light fixtures in the ceiling and my wiring appears to be somewhat close to the bottom diagram, although I have no traveler wire (red) in Box 1 - which is what is throwing me off here: 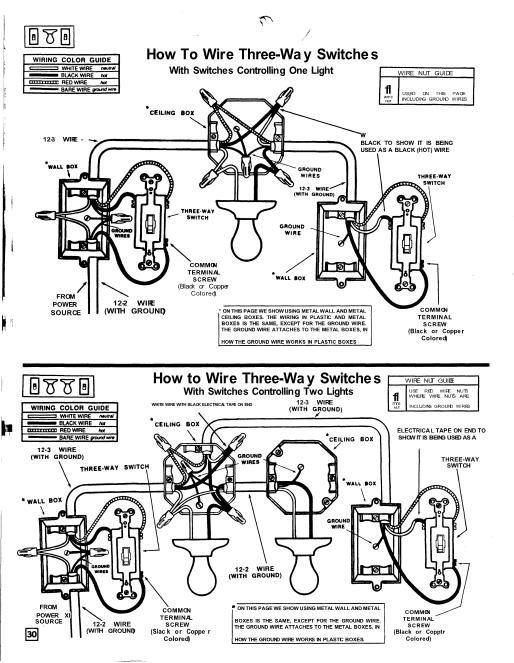 The traveler is usually, but not always, red. The traveler has to be present, or your current “dumb” 3-way would not work. Do you have an extra wire of any color in the boxes?

You have a black and a white in each box so those have to be the travellers unless there is a junction box and they changed wires somewhere in between. The remaining black wire in box 1 is probably the incoming hot wire but could be the feed out to the lights. The red in box 2 is probably the feed to the lights but could be the incoming hot wire (I doubt it but it is possible). If you can figure out which black is the hot and which is the traveller you’ll be one step closer but I think you need a neutral for the GE switch and from the wires you listed you don’t have one. Not sure what to do there.

My wife is ready to kill me

If your wife is already at this point, id just hire an electrician to keep her happy and so you can watch and learn for the next time ;). You gotta keep the WAF high so there will be a next time.

Ok so after further investigation (see attached pic), I believe the Red wire in Box #2 is connected to the incoming hot wire in Box #1 (switch on the left is another circuit that controls the outside lights). My theory now is that the black, white, and red flow up through the ceiling to Box #2 (far right of pic). 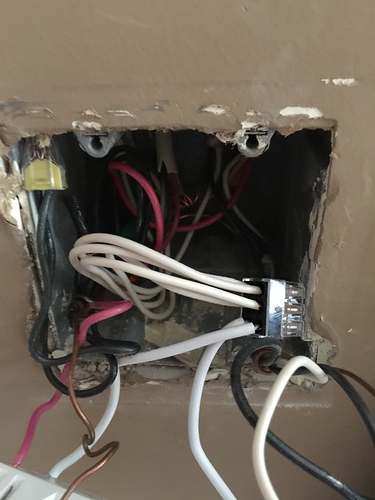 I feel I’m so close on this one though

Sean, @sidjohn1 may be right on this one. If you don’t feel fully comfortable on this, hire someone and ask that person all the questions you can so you can do it yourself afterwards. Also, it will help you with getting the GE switch into that gang box that looks small. I broke the load wire of a fixture trying to get a Leviton switch in a gang box (granted, it was already chipped by the electrician when he opened the romex) and ended up spendng quite some time fixing it.

The red may look as the traveler, but you can’t trust the wire colors. All my travelers are actually black.

After seeing your picture I am no longer confident of my earlier response. Typically a three way switch is wired with two travellers but there are multiple white wires in your picture which would suggest neutral. Here is how I’m used to seeing them configured. By your description. Sounded like you have option 9 wiring here. Except with different wire color. Only way to confirm this is with a meter. I usually ask people to look for load, line and neutral. One tip to look is the common wire terminals on your switches. One of them will usually be line and the other will be load.

Appreciate the help here everyone - as an update I put the old switches back in and got those working again. Controlling the lights in the laundry room was apparently very low on my wife’s priority list. I’m going to invest in other scenarios that she finds more useful as I expand the system.