I have about 10 Dimmers I just put in. Some are GE 12724 others are Jasco 45712. They both look identical (same size blue LED, i saw older ones were bigger on the JASCO) all take the neutrals.

Regardless the brand, they all do the slow fade on and off. The issue I have is with direct level changes. 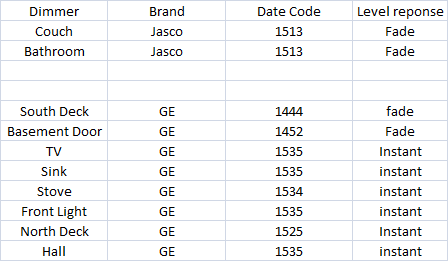 The GE, the only two that fade are the 14xx date stamp
And both Jasco Dimmers Fade

Anyone else seem to have this issue, or can someone let me know how their dimmers respond to direct level changes. Im guessing it has to do with manufacturing.

I may be sending a few of them back as its annoying to have one set of lights fade and the other go instant.

I believe this is a manufacturing thing.

@duncan can correct me if I am wrong

Just curious if you found out more?

I would love to be able to control fade rate with smartthings.

I did not find out anything officially, but can only speculate that the older GE run did a fade, and the new do instant level changes. The Jasco I have no idea where they fall into it as I only have a couple from them and they all fade.

It seems like other hubs like the wink allow adjustment of the dim rate so it may be possible that Smartthings can do an update to support it. Maybe the wink does some internal dim thing vs using the switch.

The GE Link bulbs can have configurable dim rates so I don’t see why the switches wouldn’t. Not to mention, all the GE switches I have are the same model number with just different dates. Which makes buying them a crap shoot online. Some will have older stock some new.

I have 6 zwave 1438 GE dimmers. They all fade on and off. I bought them 2 weeks ago.
Do you have zwave and zigbee dimmers? Maybe the newer (zigbee) work this way??
Just wondering…

All the dimmers fade on and off. The difference is when doing a level change via the app/Voice commands. The 15xx goto the set level instantly. Where as the 14xx fade to the new level.

Maybe something in the app has changed

That’s how all the new dimmers are. They fade on / off when toggled with the switch or toggling on/off with the app. Direct level changes using the slider from the app are instant. All my dimmers operate how they have since day one. Older models still fade on level changes, newer ones are instant Nothing has changed.