What, if anything, has anyone heard? It says it is inter-operable with ST, but to what extent? Is anyone planning to pull the trigger on this?

No patents, no technical specs, and they profile three team members: the hardware guy, the UI guy, and a guy whose job is to “inject fun into the company.”

Other than the magical marketing statement that “this will make everything work together” (with no technical specs to back that up), it’s not clear what advantage this would have over any competition, such as google home and Amazon echo combined with a tablet dashboard. (Yes, that would be two devices instead of one, but hardly anyone cares about that.)

EchoSistant can already turn an echo into an intercom, although the technical set up is complicated.

Introducing Version 4.1 of Echosistant Release Version 0.3.3c Release Date 03/18/2017 This release brings you the most reliable recurring Scheduling app using Cron expressions and robust Reporting, in the all new Notifications & Reporting Add-on Smart App. To successfully update to Version 4.1 please perform the following: Update the Main EchoSistant app Update the Main Custom Slots Update the Message and Control Profile Update the Notifications Profile Summary of changes: Introducing ST’s only app using robust Cron Scheduler. ~ schedule Hourly, daily, monthly and even yearly events with ease and reliability. Introducing the fully customizable ‘Ad-Hoc Reports’ ~ This report allows you to select your devices you want to report on as well as create a fully customizable report u…

Nucleus is an Alexa enabled video intercom so it gives you voice control of anything Alexa controls. And you can buy it now.

Admittedly, it’s not also a dashboard, so it just comes down to what you want.

There are already good existing dashboards for SmartThings, but they don’t also run voice. But again they’re available now.

I’m not saying it would be a bad idea to have a dashboard combined with a voice assistant, I’m just saying I don’t see any evidence that Fuse is going to be the best option in that category.

I’ll take a look at Fuse once it’s actually shipping, but there’s nothing there to motivate me to back it early.

Admittedly, it’s not also a dashboard, so it just comes down to what you want.

There are already good existing dashboards for SmartThings, but they don’t also run voice. But again they’re available now.

I agree with @JDRoberts; however, now that the Google assistant can control ST with alway on listenig, and the lates ActionTiles, that Indigogo startup is already DOA!

And you can already have a live camara view tile with a door control button on tha ActionTiles.

Sorry JD how I come off, but I am actually agreeing with you.

I’ve got the nucleus right now, and have been seriously considering ditching it to get the Fuse connect. It APPEARS to be much more of a sleek design, not to mention actually doing the things I was under the impression Nucleus would do.

“Appears” is the main point. Right now, it’s just a marketing video. Everything looks good in the kickstarter video, but we’ll see what actually ships.

ver, now that the Google assistant can control ST with alway on listenig, and the lates ActionTiles, that Indigogo startup is already DOA!

Indeed. I have had a number of the kickstarter campaigns I’ve backed turn out to be flops. What I know separates the two devices is that Fuse is clearly showing a touchscreen device that does more than call a person. That is very much what I am looking for. That is not something that could end up being Alexa voice control as with Nucleus.

ver, now that the Google assistant can control ST with alway on listenig, and the lates ActionTiles, that Indigogo startup is already DOA!

Indeed. I have had a number of the kickstarter campaigns I’ve backed turn out to be flops. What I know separates the two devices is that Fuse is clearly showing a touchscreen device that does more than call a person. That is very much what I am looking for. That is not something that could end up being Alexa voice control as with Nucleus.

Have you looked at Zipatile? It’s been available for a few months, definitely combines home automation with a video intercom, has a touch screen, and is even supposed to work with smartthings although I don’t know of anyone who’s done that yet.

I confess I really want one of these, although I definitely don’t need it. But I’m so curious to see what it actually does on a daily basis. Reviews have all been good.

I think the only thing that’s kept it from taking off is the price point. at just under $400, it’s a little too expensive for the typical smartthings/vera customer, but requires more technical expertise than the professionally installed systems.

But dang, it’s a sexy beast… 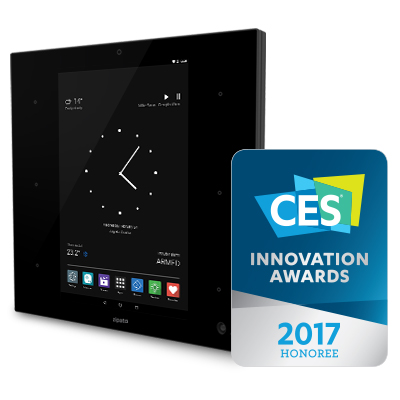 ZipaTile with Z-wave and Zigbee is the complete home control system in the form of a single device. It can be easily mounted on any wall, in any home. Featuring a large number of built-in sensors and hardware modules, ZipaTile will replace numerous...

The ZipaTile is primarily a wall-mount Android-powered home automation controller (v5 Lollipop) that combines an 8-inch touchscreen tablet (800 x 1280) with built-in communication radios and sensors for Motion, Shock, Sound, Light, Temperature, and Humidity. It also comes with an external temperature sensor, and provides a dual dry output and dry input for wiring in other external devices.

With an Alexa Skill as well.

Tagging @johnconstantelo and @Navat604 because, hello! A touchscreen controller with dry contacts!

I don’t mean to hijack the Fuse thread, so we should continue any follow-ups in the zipatile thread, but the point is the zipatile is available now. The fuse is still just marketing.

Does anyone know if zipato zipatile can be configured as an interface in some way to smart thing ? Thanks! D

Voice recognition is hard, very hard.
They either use Alexa or a similar API, or it’s not going to work.
When I saw this all I thought was Action tiles, it looks alright but it’s still too niche and not going to work without a bigger company behind it.

I did look with great interest in this Zipatile panel. I am just waiting for it to work with ST. With such a clean look and multi sensors. I don’t think the price is that expensive. Just a little harder for me to rip all my tablets off the wall right now. Intercom function is definitely a plus.

Since the Ring integration, I have decided to keep my Nucleus devices. The are perfect as intercoms and can connect to mobile phones as well. Much more useful now.

If they integrated with skybell, I would be right there with you on that, despite the fact that most of the video looks pretty cheesy. I don’t think connecting to a cell phone is anything that should be a selling point, as at this point, in home automation, anything that doesn’t connect to a phone is mostly obsolete.

I just purchased one to see what can be done… lets see!

So, the ZipaTile arrived. Only just started playing with it…

But a few photographs…

The verdict is in … really happy with it as a wall controller running actiontiles. The touch buttons along the left and right can be programmed to run other apps e.g. I have one configured to launch the sonos controller app and the buttons react to hold, double tap or single tap for different actions.

Very sleek/professional looking when mounted on the wall.
Power being at the rear of the device means cable management for power is easy.

It doesn’t seem possible to root the device at the moment and google play services aren’t installed. This causes an issue for example with the nest app. Although it’s likely possible I could use the native functionality to control my nest thermostat anyway(as an aside, I have a problem with nest/actiontiles - it doesn’t always update and it’s slow to react - nothing to do with the zipatile)

The smart things client runs fine although I don’t tend to use this for anything other than administrative tasks personally.

As for any sort of “real” integration with smart things…Ive not played around with this much yet, I did manage to set it up as a secondary controller to smart things and I could see a number of my zwave devices although I’ve not yet done anything with these and as JD pointed out in another post, smartthings doesn’t seem to know the status of the devices if they are controlled from a secondary controller(zipatile). What would be neat is to expose the various sensors, relays and siren it has to smart things in some way… IFTT looks like it could be a possibility- updates to follow!

As I’m currently using it, it’s an expensive solution but, very happy with the way it looks nonetheless…

The verdict is in … really happy with it as a wall controller running actiontiles.

Love this, thanks for sharing!

I think @625alex and I ought to have a chat with them and see if they’d welcome a bit of partnership. While I’m sure they are working on “direct” SmartThings integration, it looks like ActionTiles is more than just a stop-gap, right?

I’d have to see something pretty compelling to move away from ActionTiles as our ‘main’ interface - so definitelty more than a stop gap! for us

But its a shame not to be able to make use of the various sensors it has in conjunction with smartthings… I think you should definitely reach out to them!

I just got a zipatile to play with, also, but it’s going to probably take me a couple weeks to get it set up as my techie aide only comes on Tuesdays. I’m excited about it, though.

Hi JD - did you get a chance to have a play with it? What are your initial impressions?

I had a play with the rule engine, very quickly building a rule to turn the screen on, on motion.

I also accidentally found out that it has a “panic alarm” feature (hold the “soft” button on the bottom right it then initiates a telephone call.

Hi JD - did you get a chance to have a play with it? What are your initial impressions?

Haven’t gotten it set up yet. I only have one personal aide who can do techie stuff and he only comes on Tuesdays. We’re planning to take a first pass at it this afternoon.