As the weeks pass, it just gets worse and worse. Today, all my door open/close sensors shows as open (when they’re not), there’s severe delays when sending commands before the device actually responds. Lights plugged into my Aeon sensors do not respond to motion. And speaking of motion, 3 out of 7 motion sensors steadily shows motion when there’s not. I’ve reset my router, APs, and ST Hub several times as well as Repair ZWave Network which doesn’t seem to resolve anything. Sometimes however, doing the above does improves things, but in no time things go back to the states described above. I would really hate to factory reset at this point due to the number of devices i have but there’s no guarantee if that’ll even resolve. I’m tempted to just move onto another home automation system that supports Zwave if I’m to do a factory reset and start from scratch anyway. Help

Sounds like to me that you have interference and/or range issues. I have over 270 devices running pretty well. All the resets you’re doing aren’t really going to help if your devices can’t pass along messages, and resetting your router and AP don’t factor into anything unless you have wifi devices - unless your ST hub is sitting really close to your router. You could be getting interference from that.

Zigbee repeaters, such as the Lowes or ST ones, will help with your motion sensors (assuming they’re zigbee). Do you have any of those? I have one in every room, and the difference that made in having a healthy Zigbee mesh was immediately noticeable. Same goes for zwave devices that are repeaters.

Thanks for the reply. I was so hopeful that relocating my ST hub was the tkt since it was as you mentioned located just inches from my main FIOS router. But no dice. Performed another network repair and things just seemed to have gotten worse afterwards. Every other device is intermittent and at none of my routines are responding. Perhaps I will try giving Samsung Smarthings a call since I see they are open on Saturdays. thanks.

Exact brand and model of the affected devices? 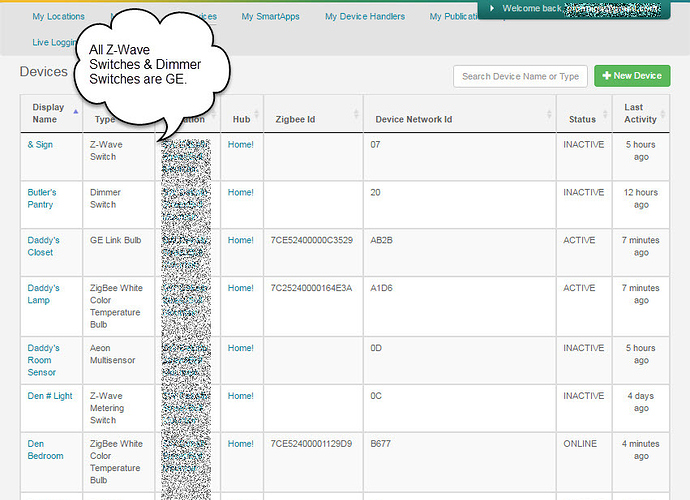 You’ve got a good mix of Zigbee and Zwave devices listed.

Your zigbee bulbs look like they have recently seen some type of activity, but I can tell you just from looking at your list that you should/need a (or a few) zigbee repeater-type device like the Lowes smart plug. I have a ton of zigbee devices (130+) of all sorts, and ALL of them will have some sort of activity (usage, polling, etc) in an hour or less. I check daily. As soon as one of them go beyond an hour I know it dropped and needs reincluded to ST, or the battery died.

In your case, Emma’s bedroom lamp, motion sensor, and floor lamp have a problem. I highly suspect it’s a range and/or interference issue. You need a zigbee repeater in her room.

Your kitchen sink and study bulbs could also be suffering from the same thing Emma’s devices are having a problem with, so seriously consider another zigbee smart plug somewhere.

To start peeling back the onion on the zwave devices, what does your hub’s event log look like? Does it look like this (lots and lots of pings):

If you can share a screenshot of the most recent activity it may help point us in a few places. Also, when you do a zwave repair, are you watching the hub’s event logs? What error messages are you seeing?

Sorry to interrupt but If you have a lot of pings I guess that is bad? My network has been slow since I added my 3rd hub in the house (ST,Harmony,Phillips Hue ) . My ST hub is using the short ethernet cable that comes with it to connect to your router so mine might be too close as well .My Wifi router is using Channel 11, I read somewhere that helps with the channels being far apart .

My Wifi router is using Channel 11, I read somewhere that helps with the channels being far apart .

It just depends on what your SmartThings zigbee channel is. You can see that in the IDE for your account.

ZigBee and Wi-Fi channels both exist in the 2.4 GHz band, existing in the exact same frequency space. When deploying both Wi-Fi and ZigBee in the same environments, careful planning must be perform...

The zigbee channel is assigned randomly to your hub at the time of manufacture, so different people are using different ones.

The V1 hub couldn’t change its zigbee channel at all.

The V2 hub will randomly change its zigbee channel if you completely reset the hub (meaning you’d have to redo everything), but the reassignment is still random, you might even get the same channel the next time. So that’s usually a last resort.

On the other hand, most WiFi routers will allow you to change its channel through the admin tools, so it’s usually easier to change that one.

All of which is to say that Wi-Fi channel 11 might’ve been the best one at your house, but might not be the best one for somebody else.

If you have a lot of pings I guess that is bad?

Nope, that’s a nice and clean event log with no errors r anything odd.

So after reading some replies, I decided to relocate my v2 Hub to the main floor and looks to have improved connectivity and things start working fairly normal again. And as expected, since relocation… the items upstairs on the second floor (Emma’s room, Daddy’s Room & Study) are now struggling and only intermittently work. And the past two days, things started to go back to being unresponsive and 10-15second delays when controlling things. I thought by picking up a smart switch like this and situating it on the 2nd floor to act as a repeater would help but did not seem to improve a thing: https://www.lowes.com/pd/GE-Z-Wave-Wireless-On-Off-Lighting-Lamp-Module/50294525 Can someone confirm that this model does act as a repeater? Thanks!

That is indeed a repeater, but just for zwave devices. You need a zigbee repeater as well for the devices in Emma’s room on the second floor because those are zigbee devices.

Lowes has a smart plug that is both a z wave and a zigbee repeater. It takes some ide work to get it all working with smartthings but in the end you have it all operating locally so it’s worth it! A few of those throughout your house should fix your range issues. I had a range issue with a zwn-rsm2 dual relay device for my fan and light and relocating my hub fixed it but I’m getting a few of the Iris smart plugs from lowes to make sure I don’t have these issues anymore in any room as I expand.

Thanks @johnconstantelo and everyone else in this thread.

I guess i didnt understand too much about how the mesh system worked and thought every Thing that’s added is a repeater for the next closest thing (battery powered motion sensors & open/close sensors)… boy was i wrong huh? Not sure if it’s related but it seems to have started around end of summer when my

became unresponsive. During troubleshooting and probably not knowing what i was doing, I likely disconnected other things in frustration and performed the repair function numerous times which probably is what snowballed it and made everything worse. After buying a plug-in switch and relocating my hub, I was frustrated again when things still wasn’t working right. Then saw the reply about it needing to be zigbee. So after picking up a zigbee smartswitch

http://a.co/7YnpZPa and installing it this weekend, things normalized almost immediately after a few re-pair processes. The responsiveness seems to also have improved after I disabled some non-essential SSID’s coming from 2 other access points i have throughout the house. Anyway, all is well now… Feel guilty that I had almost turned my back on ST and was ready to throw it out the door. Thanks SmartThings community!