I tried relentlessly to get @geeji’s code to work at this link, but for some reason it wouldn’t. I think some of the Fibaro open/close sensors have a different firmware/code on them.

A possibly different version of the Fibaro FGK-101 was initially one of the suspects, but actually it was completely innocent : the problem came solely from the SmartThings v2 Hub, which behaves differently from the v1 Hub (it now calls for CRC16 encoded responses from the FGK-101).
And since I did not have a v2 Hub myself, it took me way too long time to converge on the right culprit.
Thanks to nattyb for his patience and help debugging that issue.

I am still using a v1 hub. I do have a v2, but haven’t even opened it yet. I really think it may be the Fibaro itself, but that is totally a stab in the dark. You are much more knowledgeable than I am when it comes to this stuff!

This could totally be my system and not the code though.

Happy to keep helping you guys test. Just let me know what you’d like to look at. 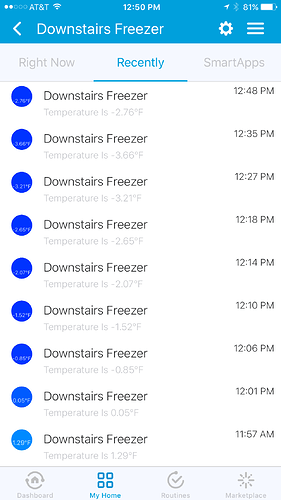 Hmm, strange. On mine it does report every 4 minutes, sometimes it does go longer though. I do not know what would cause that. No need to help test, unless you’d really like to. I probably won’t make any changes unless someone finds a way to make it better. I’m a total amateur, I just kind of happened to stumble into creating this and wanted to share with the community if anyone found it helpful…

I seriously couldn’t tell anyone a single thing about coding, I just looked at several other codes and kind of copy and pasted to make this one, and guessed at a few other things and it happened to work out. Dumb luck.

@nattyb
The mystery deepens : I thought I had isolated the problem to the v2 Hub different behavior, but if you still have a v1 one…
Between the firmware updates of the Hubs and the possibly surreptitious firmware updates for the non-SmartThings Devices, the only thing which is sure is that upward compatibility is far from being guaranteed for custom Device Handlers.
Too bad we cannot only use SmartThings 100% reliable Handlers …

Hello @nattyb. I wanted to see if you ever upgraded to a hub v2, and if so, how does your code work? I was going to give it a try to monitor my Chest Freezer during a brew fermentation. I appreciate the work you have done this far and look forward to your response.

I have had a v2 hub for probably 8 months, but haven’t migrated yet. It’s still sitting in the plastic wrap and I don’t know if I will take the time to do it or not.

I would think it would work without a problem. I would imagine some of the issues with the other codes were due to slight variations on the sensors purchased. Whether it was because they were purchased in other countries, or just different time periods. Total speculation on my part, though.

LOL… I hear you. For what is is worth, my V2 has become fairly stable over the last month, due to all the upgrades.

Hopefully it stays that way, because for the three months prior, it was rough

Tried to read up, but could not find clear signs of using “momentary” switch and sceenes.
Parameter 14.

Did you play around with this?

@einars @geeji should be able to help you with any questions you have. I’m sure he’ll chime in here. ‘Fibaro Z-Wave FGK-101 Temperature & Door/Window Sensor’ Full Support Handler here’s the work that he did on his device handler. It works great.

@einars : no, sorry, I did not play with automatic “scenes” activation.
But Fibaro’s “scenes” are equivalent to SmartThings SmartApps, i.e. “macros”, so if you modify my FGK-101 Custom Handler to generate ad-hoc IN Alarm events, with a SmartApp listening and triggered by them, you should be able to achieve what you want.

Beware however that too many things in SmartThings do not precisely behave as (imprecisely) documented, and that the general SmartThings cloud stability is very poor (although somewhat improving recently), especially in relation with SmartApps activation, so you have better be prepared for lengthy debugging and “defensive programming” all the way…
You should be fine as long as you do not aim for any “mission critical” task, and no (major) damage will occur if a SmartApp is not triggered when it should, or is triggered out of sync.
Given the present state of the art, especially for SmartThings, Home Automation should be considered more as a hobby than as a life saver…

How does this get applied? I copied the code and tried to insert it as a device handler, but it failed to save. I’d really like to have the temp show on my things page like you did, but will need more of a step by step sadly…

Thanks to any who’s willing to help

Sorry, saw your post too late.
Just in case you have not already found by yourself your answers, look at this post.
Note however that SmartThings custom Handlers programming is quite quirky, not really fit for programming beginners

Thanks everyone, has anyone found a way to integrate the fibaro device handler with the new smartthings app?

I haven’t had a chance to migrate to the new app, so I can’t offer much help. However, I’m afraid that custom handlers may not be fully functioning in the new app…

Hi all, I’ve got some issues trying to get this working with the other handler which I think might be FW related. (I have 2.05 and 2.01 Fibaro FGK).

Would someone mind pasting the code they have working from above for me? I’ve tried copy and paste but I have errors (and I’m no coder).

I’m still using the classic app. I probably need to keep tinkering, I’m sure I’ve had it working previously. just need to find some time!