I’d be interested in how other people have done this. Clearly the sensor is designed for doors that fit flush with the frame, but anyone in the UK with a UPVC door will know that the door overlaps the frame and there is a lip of around 1.5cm. so if you have the sensor mounted on the door it will not be in contact with the magnet.

I think the sensative strips are probably a better match to this type of door.

They are less than 3 mm thick, weatherproof, can be painted, and give you a few more positioning options.

They were originally sold on the European market and are now also available in the US. A number of UK members have them.

The Sensative Strips door/window sensors are nearly invisible with their slim design. Use them indoors or outdoors to monitor the comings and goings of your home or trigger various automations. Wit...

I should add that the normal advice if it is just a contact sensor would be to replace the magnet piece with a much stronger magnet. Educational supply and scientific supply vendors often sell magnets quite cheaply. It should be possible to find one that could trigger the reed inside the sensor piece even over a distance of as much as one and a half centimeters.

That said, I would be concerned about trying that with the SmartThings-branded multisensor as it might throw off some of the other sensors inside the device.

Thing is I already have a multi-sensor going spare so I really hoped that someone else had come across the problem and solved it… I’m thinking a PVC block of some kind to raise up the magnet to the level of the door from the frame.

Although I like the Sensative Strips I think my favourite door sensor right now is the triangular Aeon one.

Hopefully Vesternet will soon publish a blog post where I test various door sensors (it’s an updated version of the column that some of you might have seen in PC Pro magazine).

You can get away with a fair gap between the magnet and the sensor.

Excuse the poor pictures - and the state of the doors - but this is how I’ve got mine on uPVC doors and they works fine. The magnet is level vertically with the sensor, but with about a 1cm gap and set back slightly.

The front door has a slightly larger gap, but isn’t set back:

(Decorating properly is a project for… I dunno, maybe next year! Too many gadgets to play with instead)

I did a fair amount of playing with the app and the sensors before I attached them to see when the app saw the door as open - it helps to get someone else to hold them in place while you view the app to make sure it shows them as closed when they’re in place.

Here’s mine… Sensor on the frame, magnet on the door. Helps I have a window above the door I guess

I’m a huge fan of the Aeon sensors. You hardly even see them once installed.

I just didn’t bother with the contact part of it. It’s an accelerometer too (which registers angle, vibration, and movement) and is very sensitive.

I just fitted it next to the letter box with double-sided tape and it alerts is someone opens the door, knocks on the door, when post arrives etc. I’ve also tied it in with a Phillips Hue light bulb that’s in an outside light, so if someone knocks on the door the light goes on. (In the smart app you need to select the “acceleration detected” option to use it to detect vibrations etc instead of just using the open / close option.

It’s so sensitive it even detects someone putting a key in the lock and the light goes on too.

Probably the only reason I’d consider using the other contact part of it is in case someone opened a door or window very slowly and I thought the accelerometer wouldn’t detect the movement but it’s so sensitive it’d be very hard to do.

I did think about buying several of these or the Sensitive Strips to put on the windows and doors but if you’re going to do this you’d have to do every door and window in the house (sods law the one window you don’t do is the one you’ll be burgled from) and it was going to work out very expensive for me (£400+) so I opted for 3 motion sensors dotted around down stairs (£25 each at the moment) and for the time being I’ve set them to turn my Bose speaker on full blast between midnight and 7am, as I already had this. I’ll probably buy a siren in the near future though. You get the same result of being alerted if someone breaks in but without the expense of putting sensors on every door and window and then maintaining them all.

Problem with using just the acceleration sensor is as you state, its very sensitive. I had the door knocker smart app installed, but ended up turning it off as it was reporting there was a knock at the door when there wasn’t!
I suspect maybe the wind or something is causing the door to slightly vibrate and is being picked up. Saying that, its on a cheap wooden door the builder fitted 16 years ago, but I’m about to get a Rockdoor door fitted in the next few weeks so I will try again in case the replacement door reduces the false positives.

Alternative, you don’t NEED to use the ST magnet for the job. Any will do as long as it has enough power to flip the contact inside the sensor…

Yeah, I did get a few false alerts at first when I fitted it to the edge of the door but then I moved it to the middle next to the letter box and it’s worked perfectly. Goes off every time someone knocks on the door but I’ve never had a false alert since.

this is the Vesternet blog that I mentioned several comments up in the thread. Hope some of you find it useful: http://www.vesternet.com/blog/2016/12/z-wave-sensor-review-why-should-beauty-be-in-the-eye-of-the-beholder/

I use the contact as well as the motion/vibration sensor as I like to know when my doors have been left open, which motion alone won’t tell me.
For example: if my heating switches onto a scheduled heat, but the back door is open, turn the heating off and send me a message.

For anyone searching for a solution to this - as per one of the above posts: attaching small magnets did the trick for me. I happened to have some already (for a different project) but you can get them pretty cheaply on Amazon. They are very thin so they give you a lot more options for placement.

These are the ones I used, for example: 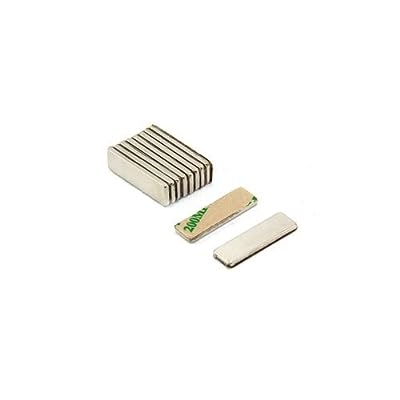 Late reply, I know, but I was wondering how the Sensative strips have stood the test of time? Surely there’s something this doesn’t do that the others do seeing as the battery is rated for 10 years?

I’ve searched around and what I’ve found is that Sensative recommends setting the wakeup interval to 24 hours. Does this make a practical difference at all? Obviously, if an event (open/close) was missed by the gateway it could be 24h before status was rectified, but are there any other gotchas?