Hey there, has anyone found a fingerprint padlock that works with ST? Thanks!

Hey there, has anyone found a fingerprint padlock that works with ST? Thanks!

What country are you in? The device selection does vary.

That said, the short answer is not at this time, but there are quite a few Bluetooth padlocks with fingerprint readers now, so maybe in a year or so some of them will convert to Thread, work with Matter, and so work with SmartThings. But again, not here now.

There is a longer answer, but it’s a little complicated, so bear with me.

There’s nothing that works directly with ST. But there are a few that work with Alexa, so you could get partial integration that way, at least enough to unlock it remotely or on a time schedule if desired. BUT—all of those require that the lock also be within range of a gateway/bridge device. So…it might be suitable for home, but not for, say, a school locker.

If a lock plus bridge would work for you, you could then use Alexa routines as an intermediary to be able to unlock the padlock from smartthings. That’s about all the integration you’d get, though. You wouldn’t have status to know if it was unlocked any other way, or by who.

If that would be enough for your use case, here’s a typical lock of this type. It works with the TTLOCK app, which does have an English option (some of the others only offer Mandarin). You should be able to find this on alibaba, I’m just too tired to look it up. 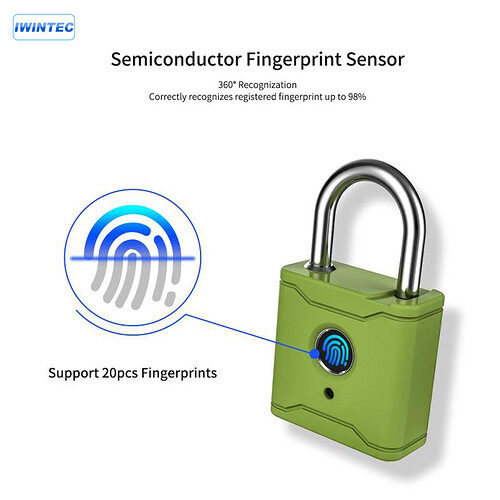 You would still need a gateway that also works with TTlock. Here’s a typical one of those.

But like I said, waiting for a Matter-compatible version would probably give you better integration for less money. But those aren’t here yet.

(Tuya has their P22 fingerprint padlock, but I am unable to confirm that it works with Alexa. That one might eventually get Matter support, though.)