I’m wondering… here in Spain there’s a lock that’s bluetooth driven… This one to be exact:

any chances of having it integrated with my current V2 hub?

Samsung itself makes some very nice locks with Bluetooth, but there’s no way to integrate them with SmartThings.

The main Bluetooth lock I know of that can be integrated with SmartThings is the August pro 3, and then only with their add on bridge device. That unit has zwave, Bluetooth, and Wi-Fi connection.

The Danalock v3 also offers both zwave and Bluetooth in their European version.

There may be a couple of other Bluetooth locks that have similar Wi-Fi bridges. It’s becoming more popular as a way to add integration with voice assistants like echo or Google. But whether they would integrate with SmartThings is a whole different question. The August is very unusual because it also has zwave.

I was looking at the entr model because it’s up for instant grabs in a local hardware store… and it doesn’t involve changing cylinders and such! LOL!

I will then go ahead with the original plan and get the Nuki lock… there is (was?) an integration here somewhere… lol!

** EDIT: I saw the danalock a while back… but I’ve read some reviews that mention it to not be too safe… like it’s materials are somewhat flimsy or something like that… so I gathered that since nuki had better reviews I’d go with them… plus! I live in an apartment building… Nuki has a solution for the front door too!

With Nuki Bluetooth/WiFi lock integration enroute. Just awaiting on a patch from ST’s engineers to the platform and we can release it.

The main Bluetooth lock I know of that can be integrated with SmartThings is the August pro 3, and then only with their add on bridge device.

Actually, with the August smart lock pro, zwave (and Bluetooth) is in the lock itself. The Connect (wifi bridge) is needed for some remote integrations and capabilities from the August app and cloud, but not for zwave connectivity to ST.

does this supports homekit as well as smartthings? i notice thet have a homekit version but does this do both

There are three different models that look identical on the outside, so you have to read the product descriptions carefully and check the model numbers.

This one (YRD256ZW2) will work with SmartThings. It uses Zwave plus to communicate.

This one (YRD256iM1) will work with HomeKit. It uses Bluetooth to communicate.

The new “Connected by August” model (YRD256CBA) allows the Bluetooth lock to communicate to the August Wi-Fi bridge, but it doesn’t have Zwave support so it doesn’t work with SmartThings

In all cases, the last three numbers, 619, are the color code for the case: satin nickel.

The only lock I am aware of that can work with both smartthings and HomeKit at the same time is the August pro three, and then only if you get their additional bridge device, called Connect. 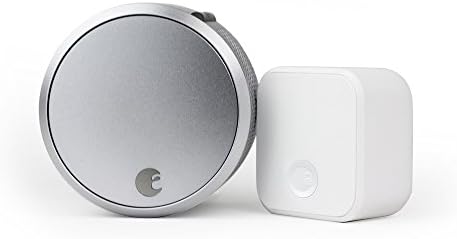 Control and monitor your door from anywhere. Know your door is both closed and locked with DoorSense

BTW, The community – created wiki has a list of devices that can work with both smartthings and HomeKit. There aren’t many, but there are some.

I’m not sure if I understand what that support page is describing.

They appear to be showing steps to connect a Bluetooth device to a ST hub? But when was Bluetooth connectivity enabled?

I’m not sure if I understand what that support page is describing.

They appear to be showing steps to connect a Bluetooth device to a ST hub? But when was Bluetooth connectivity enabled?

The new app can connect with many Bluetooth devices, but it does by connecting them to your phone. Not to the hub. And that feature doesn’t work with an iOS phone, only android.

The new app can connect with many Bluetooth devices, but it does by connecting them to your phone. Not to the hub.

That makes more sense. Thanks.

Nuki is great alternative to Danalock now. It’s is natively Bluetooth 5.0 so you can control it with your phone directly, but if you have the WiFi bridge you can also control it through SmartThings with this integration: [RELEASE] Nuki Manager for Nuki Smart Lock with Automatic Discovery, Install and Real Time Updates

So you can now use both, the Bluetooth and ST integration at the same time and they’ll be in sync.

I also read somewhere that Nuki’s V2 lock has a zigbee chip inside… so that’s another (simpler?) integration available to us!

Yes it’s upcoming. We’re also discussing that option with them.

Nice! That, along with the keypad, will be the best option for presence detection… IMO… People only need to remember to input the code on the way out…

if you have the WiFi bridge

I heard there’s an Android app that can serve as the bridge?

No, the Android software bridge won’t work as it doesn’t support auto discovery and a few other features. This integration is designed to be completely automatic, from discovery to setup. Nuki recommends the use of it’s WiFi bridge (combo) with the lock for real time updates and the best user experience.

damn… That would’ve rocked though! One less hub to worry about… Not to mention that the bridge relies on wifi and I am still having issues with wifi in my neighborhood…