FAQ: What is the difference between a Routine and a Scene? (SmartThings Classic)

Hi Manny
if you do a search of the forum I think this has been asked and answered in another thread.

It’s a little weird, isn’t it? It’s not quite clear why they were developed this way. Routines have been around for years and scenes are new. But there are some significant differences.

At present, scenes are a way of creating a set of lights, each of which can have a different color and dim setting, as a single moment in time. So you could press one button and that set of lights would all change to those preset levels.

Right now, only lights can be included in scenes. And the scene itself doesn’t have any way of triggering or a time schedule.

A routine can include several different types of devices, including locks. It can also change mode or smart home monitor armed status.

And a routine can be set to be “automatically perform when” any of several triggers occur, including time of day, day of the week, someone arriving, everyone leaving, sensor being detected, etc.

But that’s where scenes can improve routines. Because the routine can activate the scene, and the scene can set each light to a different setting, now you have a routine that can cause one light to turn on to 25% And a different light turn on to 75% from the same trigger.

About now you’re probably asking why they didn’t just add the individual light management capabilities of the scene to a routine. The company has not said. But there is one more major difference. A scene can run locally, but a routine cannot. So it looks like this was just an architecture decision for now, even though it makes the UI and rule set up considerably more confusing.

So the short answer: a scene describes a moment in time in which different lighting devices can be set to different preset colors and dim levels.
.
A routine lets you define the settings for many different kinds of devices and smartthings values, not just lights, and can be set to automatically trigger on any of many different conditions.
.
A routine can include a scene, which is how you can create schedules or triggers or widgets for scenes. (and as @tgauchat points out below, the official smartlighting feature can also be used to trigger scenes.) 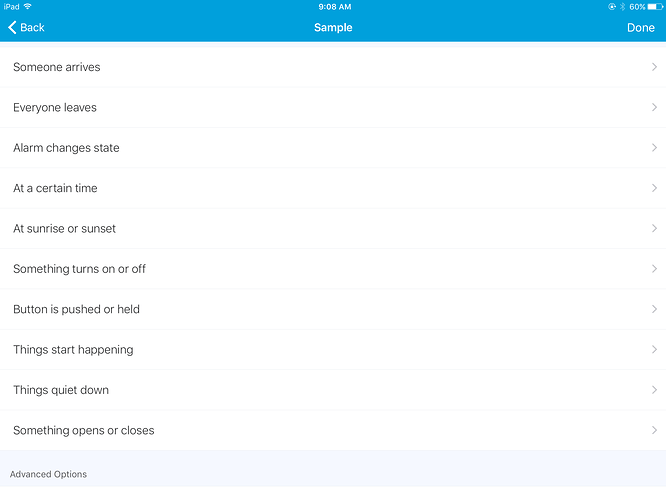 Smart Lighting can activate a Scene.

A Scene is a “reusable object”… Except that, currently, only Routines and Smart Lighting can use them. We are hoping that SmartThings opens an API to call Scenes as soon as possible, but it may take developer pressure.

Smart Lighting can activate a Scene.

A Scene is a “reusable object”…

From a design standpoint, so is a routine, in that a routine can be triggered by a virtual switch going on, so the official smartlights feature and other smartapps can all trigger a routine just by flipping the virtual switch.

As was stated in @JDRoberts post, SmartThings current capability or definition of a Scene consists of Lighting only with the ability to adjust brightness / dimming / color, and a Routine doesn’t have the ability to set each individual lights brightness/dimming when being turned on indivudally or set the color.

It isn’t what my definition of what a Scene “should” be. So your question of what is the difference between a Routine and a Scene is a very valid one. But from a SmartThings perspective JD describes the differences in how the two things coexist in this environment. We will see what they do to build on Scenes in the future.

Really, really great info. Thanks so much for the informative answers. I did a search looking for just this info and thanks so the magic of Google, it had already indexed this thread, despite it being one day old.

One thing I’ve also noted, when I create scenes, I also have options for all my smart outlets (probably because they can also be controlling lights). This gives the ability to go slightly behind lighting, depending on what you use the plug for. This also means we can turn our Christmas lights off and on with scenes, as well.

Thanks again for helping me to understand the differences between these two features. I really appreciate it.

This seems unnecessarily confusing. Just use WebCore and you can control every individual item exactly as you want, without these Routine/Scene limitations/complexities.

Scenes don’t turn anything on or off. They are just a moment in time of the way you want the devices set. To use a scene, you have to activate it either with the official smart lights feature or with a routine (in the classic app).

So just think of the scene as a photograph you take of all the devices in that scene. It’s not an action in and of itself. Then when you have an automation that will use that scene you are telling that automation to match the settings in that photograph.