Fan controller: Need help choosing what to get

Hampton Bay (aka Home Depot) is coming out with a zigbee module that installs in the canopy and controls lights and fan. Seems to be an ideal solution for people that only have one wall switch.

Very cool. The link on home depot’s site doesn’t work anymore, but I’m reading it’s supposed to be available some time in June.

Was it a relay-like device? Sounds like I could just wait a little longer for this.

yeah, it was basically a specialized in wall/ceiling relay.

Whatever you do, do not use one of those GE neutral-free switches to control your fan. Those work by leaking a small amount of current through the load at all times, and that can’t be good for your fan motor. It could cause a fire.

Similarly, make sure you use a purpose-built fan controller (for speed) or a simple relay (if you just want on/off control). Do not use a dimmer switch meant for lighting.

Thanks @NorCalLights. I was just implying I’d use the GE neutral free dimmer for the light. My guess is that fan control is passed through the gang box and doesn’t go through my dimmer at all. But thanks for the safety tip anyway!

Hi, couldn’t figure out how to do a private message. Anyway I saw that you have 5 GE Smart Fan Controllers. I just got my smartthings and switches yesterday so I haven’t quite figured it all out yet. I have 2 switches and I can only get one to be discovered. I see that the instructions say the hub needs to be about 10’ from the switch for discovery. Wondering how you do that when the hub is hardwired. Is there a wireless option or do I just need to buy a long cat 5 cable and drag it around the house.

Thanks @dalec. Just to be clear it sounds like you’re saying two things here. Are you saying my only option is the GE fan control switch, which can be mounted at the wall or in the canopy like you did? That doesn’t require a neutral wire?

It’s wild that no one has come out with a zwave fan control relay device (until now). I’m trivializing it but, would a dimmer relay work as a fan control if you’re using the right smart app?

Are you saying my only option is the GE fan control switch, which can be mounted at the wall or in the canopy like you did? That doesn’t require a neutral wire?

Sorry, I really was confusing wasn’t I?

Because if you don’t have a neutral wire at the wall location the smart fan control switch won’t work at the wall and will need to be mounted up at the ceiling fan canopy or gangbox, only the light dimmer switch can be located at the wall without a neutral (but you will be limited to only controlling incandescent lights). But the option I would suggest if you plan on using CFL, LED fan lights you could install a micro controller in the canopy along with the fan control and rewire the existing wall switch to give local on-off of the fan lights and still have full control of the dim level and on-off via ST. It really is important to know what you have so you will know your options, so for my clarity at the wall switch gangbox you ONLY have two wires coming in the gangbox (no others just passing through and wire nutted, no red wires), a black and a white that are connected to the switch that turns on/off the ceiling fan lights and does nothing to your fan speeds, yes?

In my situation, when I added my ceiling fan in the room I got lazy and didn’t run a wall switch but only grabbed the closest power source. I was only using the pull chains to control fan/lights. Since I installed the smart devices in the canopy I am now able to control the fan/lights separately with an Aeon Minimote, or my Amazon Echo. I just added a new HomeSeer HS-WD100+ in that same room for my wall light switch so now with that one new wall light switch I can turn on lamps and ceiling fan lights together as well as manually toggle my ceiling fan speeds. I finally got wireless control from my one wall location after all my years of being too lazy to run the wire for the ceiling fan.

I’m trivializing it but, would a dimmer relay work as a fan control if you’re using the right smart app?

Yes, the smartapp would control it but definitely do NOT use a standard dimmer control to control the fan speed. @JDRoberts has an excellent post on why not to use light dimmer on fan control.

I agree with you… I am in the same “wait & see” as well. I have several more ceiling fans to go.

My dream solution would be to have Lutron develop a Z-Wave connected device using their existing Maestro design here. 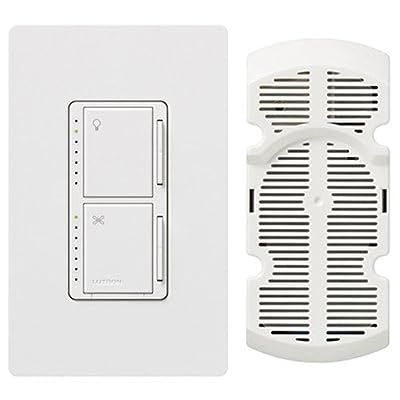 
I use this “dumb” switch today and it is perfect except for not being able to be connected to ST. It has seven speed settings instead of just 3 and the LED indicators are so helpful. It only needs power (that means a neutral ) at the wall switch. The actual fan and light control is done by a receiving module you mount in the canopy that talks wirelessly to the wall switch. It works awesome… just no zwave. I was hoping the Hampton Bay accessory would come close to this. I was by my Home Depot and there is nothing yet and the guys there didn’t know anything about it.
dalec (Dale C) June 2, 2016, 1:02pm #16

Wondering how you do that when the hub is hardwired. Is there a wireless option or do I just need to buy a long cat 5 cable and drag it around the house.

I had the exact same problem, with my garage control and my locks. You can do either:

Unless you’ve got some really thick (metal and concrete) walls or are going entirely across your house from the hub you shouldn’t need to do that. I have never moved my hub which is on the top level of my house and 2 levels down I have several switches and 2 leak sensors that paired without a hitch. It helps that I built my mesh from the hub out and not haphazardly.

Here is a thought:

Anyone have reasons this won’t work? I know the micro controller will not work on the fan but should be fine on the lights. Alternative to that is to get some Cree LED connected lights?

Anyone have reasons this won’t work?

The smart fan controller requires power (hot and neutral) plus the fan load. Switching wires only works if he has a way to get the neutral leg down to the switch. I asked @ultrazero for clarification to make sure exactly what he has going in the wall switch location. He describes it above but it isn’t clear.

@dalec
Thanks for the clarification!

Hopefully with where smart home automation is going companies will create some devices that use the industry standards. I have a Hunter Fan in our main room and although the wall switch does have neutral wiring it only has one set of wires going up to the fan.

I would like it if Hunter would come up with a controller similar to their Simple Connect (Bluetooth) using Z-Wave or Zigbee so I can automate it similarly to what I’m doing in our master bedroom (which has independent switches) on the wall and I am using a GE fan controller.

@dalec Thanks for all of the info. I pulled out the switch at the wall and here’s what I see…

I’m assuming one of the black and one of the white is for the fan motor? Or is it both white? I don’t see a neutral in this setup. It’s jam-packed in there also. It’s that older wiring that is really thick and very hard to bend. Makes things much more complicated.

Hope this paints a better picture.

One other general question… In the absence of a neutral wire, is it possible to put relays of any sort up at the ceiling instead of the switch? I thought I read that somewhere but not sure I grasp it.

The whites should be your neutrals. Just cut a section and tie into that nut. The GE switches actually come with a section of white wire to tie into the neutral.

Oh that’s good! so sounds like I can make that a two gang box and install a dimmer on the light and a fan controller for the fan. Just need to figure out which wire are fan and which are light.

Again I’d like speed control and dimmer control both locally and via ST. I imagine that’s the only way.

I’ve seen something like this, but I went with the GE Smart Fan and GE Smart Dimmer because I like having something physical on the wall to manipulate. Setting the fan speed from my smart phone isn’t ideal for me.