Ceiling fan with only pull string

I know there is already a lot discussion about automating ceiling fan. However, I would like to confirm if my current ceiling wiring will work before I buy the GE smart fan. I have only one switch that will control the light of the fan. I already automate this with a GE smart switch. The ceiling fan is controlled by a 3-speed pull string. My Hunter ceiling fan wiring is as follows. It has a neutral wire and 2 black wires. If I install a GE smart fan there, will it affect my current light setup? 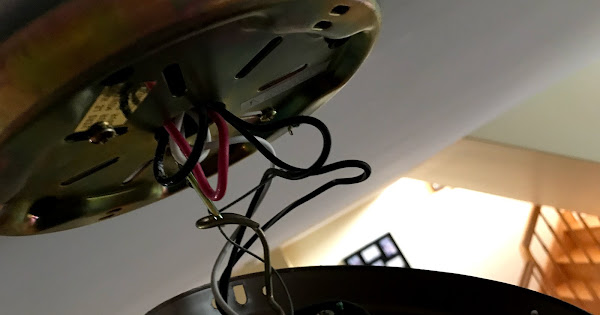 Does the current GE switch operate independently of the fan? I.e. if the GE switch is “off” does the fan still work? If it doesn’t then no, I don’t think you can do what you want since you don’t have a always on (hot) wire at the fan for the fan switch to use. If you do then yeah, it should work but I’m not too sure what you mean…mount a GE fan switch inside the fan housing?

Your best case scenario would be if you have 12/3 or 14/3 wire running to your fan. This would mean you had a neutral (typically white), a hot (typically black), a traveler (typically red), and usually a ground as well. Then, of course, you have a hot, neutral, and maybe a ground from the breaker.

Also in the best case scenario, your fan has a neutral, a fan hot, a light hot (could be blue or black), and maybe a ground.

Does that red wire run back to the switch? If so, you have separate hot lines for fan and light and you have all options available.

The fan is always on and is independent of the switch. Yes, I plan to install a GE smart fan inside the canopy. However, I think the two black wires are for the lights so if I use it for the GE smart fan, it will affect the light right?

Next to my fan light switch is a switch that controls a few electrical outlet. There are a few red wires on my wall switch. Maybe I will have to buy an electrical wire tracer to determine which one is which.

I also took a look at that option. However, I could not find any retailer to sell that to Canada :(.

Does Amazon ship to CA?

From your picture, it’s impossible to see what exactly is wired to what. Can you take a better picture showing the wire caps? Also, a pic of the wires at the switch would be helpful.

You can get a Zigbee/RF fan receiver to mount in the canopy. Then no need for extra wires or extra switched. A single hot feeds the receiver, and you can use an RF remote to control light/fan on/off/dim/speed.

If your fan works independently from the GE switch you already have for the lights then there has to be a always on 120v for the fan. With that said you should be able to do what you want to do, figure out which one of those wires is hot for the fan. The easiest way as long as you are careful is to test those black and red wires with the power on, switch off the light switch, and test them again. The 1 that still has a 120 V is more than likely going to your fan and that’s where you put the switch in between. The 1 that turns on and off with the switch of course is going to your lights.

One stupid question. If I know the hot wire for the fan, how will I wire it to the GE smart fan? It is my understanding that GE smart fan needs 3 wires: neutral, load, and line.

Amazon US only ships some items. I have searched how to buy BOND in Canada with no luck.

Well, since you want to be able to switch that hot on off you just put the switch in between, the hot side would be your line to the switch and the fan would be the load side. And from the picture i see a white (neutral) and a copper (ground). I mean use a mtimeter to test everything to confirm but thats how i see it.