With RBoy’s Ecolink flood sensor device handler being dead in the water right now, I’m struggling to figure out a way to report on the status of my flood sensors with regards to the battery being dead. I’m still using the RBoy device handler for this mainly because I have no idea if an Edge driver even exists for it.

Long story short, how is everyone figuring out how to notify yourself if a sensor goes offline? I see no fields in these sensors using SharpTools that I’d be able to report on, and the battery level is perpetually 99%, which is almost certainly incorrect.

Some batteries stick at different levels before dropping. So it might be stuck at 99 until the battery really starts dropping significantly before it actually starts reporting a different value. Usually the trick is figuring out that sweet spot middle zone where things actually update. Otherwise its high and not changing yet or its too low and potentially already dead.

Yeah, I checked the API earlier to see if there was anything useful, but unfortunately not. My plan if I couldn’t find anything was to just wait and see if the battery levels eventually changed, as I had read about the 99% → 10% status change in other threads. 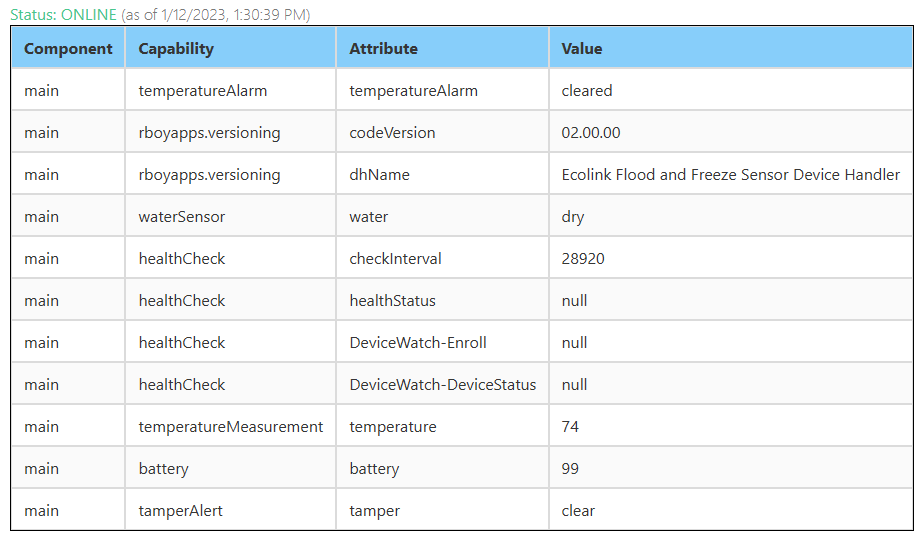 Check the thread I linked above. It shows how to use the API to get the offline status.

Looks like that’ll work, but my problem now is that the health status was last reported on 1/12, the day Groovy died. It’s still using the RBoy device handler, and I have been unable to find an Edge driver for these Z-Wave Ecolink sensors yet, which I assume is going to be a requirement.

Yep, I actually posted in that thread yesterday, and an updated driver for my sensor was released, which I plan on testing this morning.