I don’t have 1. I have just been looking for a reasonably inexpensive speakers to hook up to the Dots. I was looking at BT soundbars, but then decided BT didn’t really matter since the speaker(s) will need to have power running to them anyways.
I figure I can tuck a soundbar up above the kitchen cabinets " out of sight" and the Dot under the cabinet " out of sight" run the power and aux wire up along the wall together.

The BB reviews are 80%+ positive, so while it may not satisfy the audiophile it should be fine for " mood music"

Continuing the discussion from POST Deals/Sales/Coupons/Pricing HERE (discuss deals in the other thread):[quote=“Ron, post:1625, topic:34950”]
Your Dot shipped…mine did not

I got the UPS ship notification for all 3 last night. UPS shows delivery 4/1 ( not 3/31 promised by Amazon) . I assume that will change and they will be here tomorrow.

Chamberlain MYQ-G0201 MyQ-Garage Controller on sale. Not the best price ever, but cheaper than regular deal. [image]

Thinking about getting a MyQ. Is there anything bad/negative about it and ST integration. Of it means anything, I have a good router, TP-Link OnHub?

I got the UPS ship notification for all 3 last night. UPS shows delivery 4/1 ( not 3/31 promised by Amazon) . I assume that will change and they will be here tomorrow.

I preordered st v2 on amazon before it was available on ST’s site, then a week before estimated delivery(weeks later) ordered from ST store the st store one arrived first!

The Samsung wireless speakers look great and half the cost of sonos. Woot is unfortunately sold out

I didn’t actually think $89 was a great deal for refurb when they were at Sam’s and other places for $99 new back in Nov/Dec then clearanced down to $75.

An FYI for those of you using the Sengled Touch bulb, it runs locally with the GE Link device type. Doesn’t report power with this, but I don’t really see the benefit of that functionality anyway.

Yes! I put one in a small desk lamp and I’m afraid the slightest touch will knock it over…

On Woot it is currently 89.99. Let’s see if Amazon will have it cheaper or not.

Is this even a smartthings compatible camera?

Yes! I put one in a small desk lamp and I’m afraid the slightest touch will knock it over…

I was going to use it for a small lamp in my daughters room as a night light. Definitely too heavy for that. It’s now in the living room lamp and a Lightify bulb in her lamp.

Is this even a smartthings compatible camera?

Anyone know of a good camera that integrates with 2 way audio? Need to yell at the dogs when I am not home

Works great. Have had it for a few days and no issues just wish there was a lock feature

Ordered Blink cameras after I saw there Rboy’s thread titled OFFICIAL device handler. Thinking it was a official ST code I bought the cameras.
Was very disappointing when I went to get the code and found out there was a charge ($10 to get access to site and code) and it is not a official ST app.
I think that should be mentioned in the thread. I know there was a lot of work put into it and he should be compensated but let’s be more up front.

Was very disappointing when I went to get the code and found out there was a charge ($10 to get access to site and code) and it is not a official ST app.

Has anyone ever ordered from this company? I’m always leery of Ebay “companies”.

Blutek (via eBay) has the ecobee3 Wi-Fi Smart Thermostat with Remote Sensor (2nd Gen,
EB-STATe3-O2) for $189.99 with free shipping.

Cooper was true in my experience so I trust his judgement on the other switches. It seems like the only complaint is he could only dim to 70% level. Others complained that the switch is so big it is difficult to install next to another switch. It is tempting as this is half the price of the Cooper switches. I want two more switches to complete my downstairs control. Tough decision.

Depends on the cooper switch… I believe the coopers are a better quality. Also I believe some of the coopers have instant status feedback. All smart switches will be tight installed in multiple gangs. I just saw a post earlier today showing http://homeseer.com/lighting.html these options. I know I will be investing in them as Reliable double and triple presses, and instant feedback is worth the extra money… Trust me! (Of course we will have to wait for someone to provide a device handler) 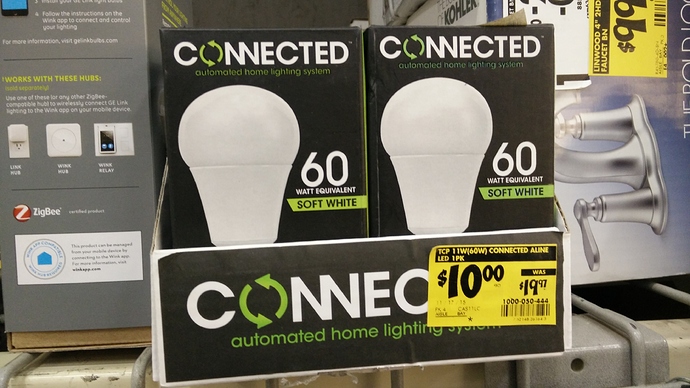 For the same $10, look for the Hue Lux on sale. TCP work pretty well with their own remote, but even the native app and LAN web interface have constant connection issues. We have about 6 of the bulbs left waiting to be replace with Hues. The TCP connected ST app requires you to login again almost daily to control them through ST.

Thx for the tip. Been using the GE Link bulbs when I can find them for less than $15. They work okay - I have little issue with them other than how slow they are.

Thanks for the reminder. I had forgotten about ordering more of those. in the hassle of getting the Lightify bulbs actually shipped.