The main light in our bedroom has a single switch in the wall, and I’d like to be able to turn it on and off from our bed, preferably using a remote on each bed side table.

The Lutron Caseta with the pico remote is almost ideal, except for two things:

I know there are separate Z-Wave controllers like the minimote, but they are expensive and overkill for this application, and probably don’t have very good battery life (or do they?)

Thank you for any suggestions!

Z-Wave Remote
Use a Harmony TV remote to trigger an action.
Use phone as “remote”

Lutron devices are very well-engineered. They hold multiple patents on all different areas of the design. If your only concern about Lutron is worrying about if it won’t function as described, you can take that off the table.

Also, the Lutron switch’s power requirement is a minimum load of 25 W for the models that don’t require a neutral wire, or 10 W for the models which do. It sounds like you will meet that easily. ( One thing about Lutron: as an engineering company, you can always find the published specs for pretty much any question.

a single switch in the wall

If your switch is smart, use auxiliary switches. Involves extra wiring.
Or you can use an Echo dot.

Thank for the information and especially for the link to the Lutron doc. If I read that correctly, the minimum load requirements apply to resistive loads. For LED-type loads, the doc says this:

To ensure proper operation of the switch with LED, fluorescent, and ELV loads, a LUT-MLC may be required, especially at lower wattages. If the status LED
on the switch is flashing or solid red in color, a LUT-MLC must be installed. To guarantee best performance, installing a LUT-MLC with these load types
regardless of wattage is recommended. Rarely, some load types may still flicker or glow in the off state even with the LUT-MLC installed, in which case a
different load may be required or more than one LUT-MLC is required.

So I looked up the LUT-MLC. MLC stands for “minimum load cap” which suggests it’s just a capacitor (and sells for $15-$20). It must be installed in parallel with the light. From the specs it looks as if it’s only 4mA (0.5W) and in any case it probably doesn’t add up to the bill because it’s a capacitive load.

There is still the hassle of the extra hub—only for that one switch (although I might be tempted to do the same in some other bedroom too).

I think I may have found what I was looking for: the Mi Cube. 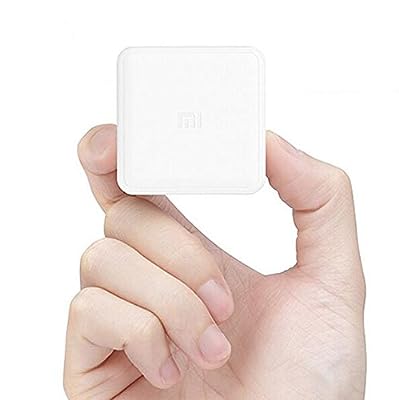 Highlights Original Xiaomi Mi Magic Controller is a smart home control center. Match with Xiaomi multifunctional gateway to use, it will be a magic device for you. Equipped with 6 kinds of motion orbi ...

Now if I could only tell how long the battery lasts.

If you’re just looking for a button device, there are several dozen that work with SmartThings. These are listed in the FAQ. Some are battery operated, some are mains- powered, so read the descriptions carefully.

If you have follow-up questions about an individual device, usually the post in the FAQ will have a link to a thread where people are discussing it. The FAQ itself is just supposed to be one post per device.

( this is a clickable link)

I would note, however, that most of those are not dimmer devices, which is what you were originally asking for. You may be able to switch between some individual settings, but that’s not quite the same thing.

Also, for a nightstand device, I personally probably wouldn’t go with the cube options (there a couple of those) because you won’t be able to Reach over in the dark and necessarily hit the setting that you want.

Instead, I think for a nightstand most people prefer something with tactile buttons so they can pick the right option quickly. Both the minimote and the remotec are popular for those depending on how many different settings you need. Both are listed in the buttons FAQ.

And of course if you are using lutron Caseta switches, their pico remotes come in several different button options (2 button, 4 button, with dimmer, etc) and make a nice handheld remote as well:

Color:White With Maestro Wireless it's easy to create the best light solution for your home. Choose the pieces that meet your needs, and you'll see how simple it is to...

However, if you are using the official smartthings/Lutron integration, the pico can only be used to control a lutron Caseta master switch. The pico itself will be invisible to smartthings. There is an unofficial, but technically more complex, integration also available which would let you use the buttons on the pico for anything that smartthings you can control. In contrast, the meaning out for the remotec are themselves visible to smart things through the official integration.

In the use case you described, just having a nightstand control for the switch in that room, it wouldn’t matter, but I did just want to mention this distinction for others who might be reading the thread.

Thank you JDRoberts, these are most useful pointers.

It’s too bad that we have to use a thread for a list of devices. There is no wiki? Because, for instance, the second post has a broken link:

Would it be worth creating a Google sheet editable by anybody? Just a thought.

In any case, the primary issue for me is battery life. (I love the new battery-less RF switches that use piezoelectricity, but I am not aware of any that’s integrated with zwave or zigbee.) The cube is cute, but you’re right that it could make the lights be turned ON inadvertently and we would not like that.

There is a community – created wiki, but it needs more contributions, particularly for device descriptions. It has a number of other very good articles.

There is a community member who has started a page in the wiki to parallel the buttons FAQ in the forum here, but it just got started a couple weeks ago. You or anyone else is welcome to contribute to it.

If dimming and reliable are important then go with Luton Caseta. I can’t remember the last time I touch the Luton bridge also dimming with the Pico is so much easier. It just works.