I just received two emails for two different tickets submitted back in mid-September. Here is what they say:

I sincerely apologize for the delayed response! We’ve been swamped with new emails lately and in an attempt to answer everyone’s new questions, we’ve missed a few older replies. That’s still no excuse and we are very sorry. Are you still needing help or were you able to get it resolved? Let me know and I’ll get you taken care of right away.
Once again, I apologize for the delay.
Kind regards,

When I made the original request, I received an email within 24 hours stating the following:

Thanks for reaching out! That is very interesting. Would it be OK if I took a look on our end? If need be, can I do a Z-Wave Network repair?

My problems are solved and have been for a while, however the emails irritate me. First, why ask if you can take a look, didn’t I reach out to you? I thought that was implicit in the request. Second, why take 8 weeks after responding initially within 24 hours? Don’t answer that, I already know. The pat response initially was designed to placate. There needs to be some timeliness with respect to the responses.

Customer service??? Not a viable and sustainable example.

There is another irritating practice that ST support has. Closing tickets for “known issues”. Been playing tag on several issues. I open a ticket, they respond confirming that there is a ‘known bug’ and fixes are coming. I respond asking them to keep the ticket open while the issues are not fixed, but instead, they are closing it. When I reopened the ticket asking kindly to keep it open for tracking purposes, I get this, followed by another ticket closure:

No worries. I have added your email address to the trending issue with our engineers. When the issue is resolved, you should receive an email notification of the fix

Maybe another closure reason should be displayed, like NOT SOLVED, because that’s what it really is. 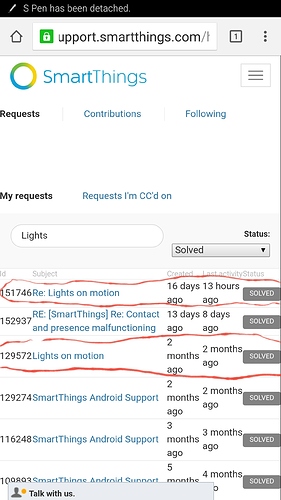 Why is support closing tickets without resolution? General Discussion

I guess now I understand why support is silent…Ticket “solved”?!? How, when? I would like to know how this issue was “resolved” without even reaching out to the customer… [image]

different issue, different topic though…That was indeed a duplicate kind of request, this is different kind of practice. There is no other open ticket for the ticket that was closed…

Just to shed some light to your first question : The support team asks if they can take a look at your logs, just for respect and an element of privacy. Some people asks questions, not wanting the team to look into it further, but for an explanation.

Imagine going to your doctor for an (insert whatever) routine/exam : you and the doctor clearly KNOW why you’re there, but the doctor will let you know what they’re doing, and ask for permission of, “is this okay if I do X?” It’s more or less the same idea.

I agree that it’s not actually intuitive for “solved”. “solved” doesn’t encompass the actual issue being solved, but the initial problem being “resolved”, by support team member doing everything they can- then escalate to engineers. Think interface wise, it’s a limitation with the platform they use, and really, the “solved” part should be more internal than external facing. But I certainly know the ops/support team goes back and forth with this same question you bring up, all the time.

But, this is just the rambles of a person observing, like yourself ;). However, I do like KNOWING at least when a ticket gets fixed by engineers, at least there’s a macro for follow up emails.

We’re not perfect, but we’ve certainly improved a lot - even stuff I’ve seen joining less than a year ago.

I see your point. I hope you see mine. My issue is a valid point too. My doctor wouldn’t wait 8 weeks.

That’s totally true. I have no explanation or visibility as to why for that. I did, however, share that back up to support team.

Thanks for your patience, at least.

Well said. I really appreciate your feedback. The only reason I brought this up, is that I’ve had other tickets that were escalated and I didn’t get any notifications when the bugs were resolved. No one is perfect and we all can see that you guys are trying hard, and certainly moving in the right direction. The reason some of us are voicing out, is not to denigrate your work, but to share experiences so others would know what to expect and to point out things that could be improved.

There’s a shift at some point at any company, where they have to start using terms that is more customer focused, and think “is this actually for us, or is that phrasing customer facing?” and evaluate processes and wording, etc.

I’d like to still say we’re kind of in that awkward teenager phase, (infact, can say the whole IoT field is).

The only reason I brought this up, is that I’ve had other tickets that were escalated and I didn’t get any notifications when the bugs were resolved.

@tyler1 Tyler (VP Operations) promised to remedy this part of their process months ago (Feb 2015). Guess everything at SmartThings runs at the speed of SmartThings… Or we’ve hit the usual definition of “few weeks” from ST’s perspective.

.2. Tactically, we’re deploying some new tools in the next few weeks, that will make it easier for support to see when the root cause of an issue/bug has been fixed by the dev/product team. This should improve how we follow up on tickets like you’ve outlined. Honestly, those tools are more geared towards trending bugs/issues than things that are impact individual users (e.g. problem with a custom SmartApp code).

@tyler1 Tyler (VP Operations) promised to remedy this part of their process months ago (Feb 2015). Guess everything at SmartThings runs at the speed of SmartThings… Or we’ve hit the usual definition of “few weeks” from ST’s perspective.

We don’t know if the implementation of the process that @tyler1 was talking back then was actually delayed. It could just be that new support folks don’t know how to use it. Hint, hint, training opportunity!

We don’t know if the implementation of the process that @tyler1 was talking back then was actually delayed. It could just be that new support folks don’t know how to use it.

An undeployed or under-deployed solution (including personnel training) is equivalent to a non-existent solution.

And the dysfunctional process continues. Support ticket marked “Solved” even though it is completely and utterly unsolved. The bug has merely been “confirmed” … and barely confirmed, actually, given the vague communication from the support technician.

Furthermore, contrary to the promised “follow-up” process specified by @Tyler1 in February 2015, the response email gives absolutely no indication that there will be any follow-up email to me at any time.

So I got a response from Support (agent name withheld), who marked the Status as "SOLVED". Insanity. I reopened the Ticket #157504, with a response asking for when solution deployment is expected. Hey Terry, Thanks for reporting this. This is something we noticed about the same time. The more reports, the better, though, so thanks. Reach out again anytime. Regards, … SmartThings Support

NB: I am ITIL trained and certified

The step that SmartThings Support is missing, is circled in red:
(i.e., Customer Receives the Solution and is given the opportunity to Confirm the Solution before the Ticket is Closed). 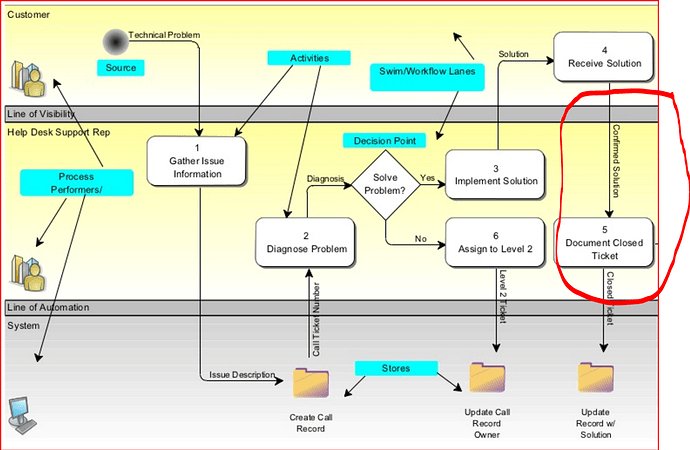 So SmartThings tech support is using a process that encourages marking problem reports (“tickets”) as Solved prematurely, in order to “keep clutter out of the system”. That would be fine, if and only if there were a working process that picks up the resulting dropped balls:

The customary practical practice that every successful platform vendor that I have worked with, in regards to issue reports that cannot be resolved immediately, is for it to be transferred to the Bug/Issue Tracking System. That system is updated as bugs are confirmed, fixed, and added to releases. When the release is deployed all of the Customers that reported the problem are notified and have the opportunity to confirm if the solution is satisfactory or not.

How do you check the status of a ticket? I can’t find any links on the support pages that send you to an issue tracker where you can see the status of tickets I have submitted, and there’s no info in the emails they send to me about this, either.

How do you check the status of a ticket?

It’s hard to find or unpublished…

An undeployed or under-deployed solution (including personnel training) is equivalent to a non-existent solution.

I cannot believe how naive I was just few months ago! I must have been drinking koolaid. Wow…

BTW, thanks for helpingout @alk

Thanks to both of you!