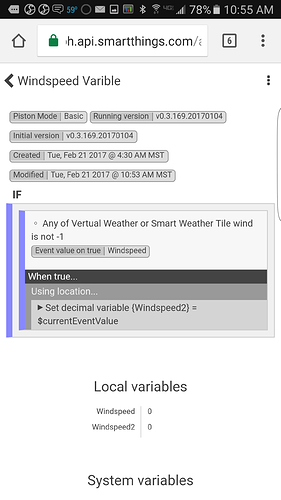 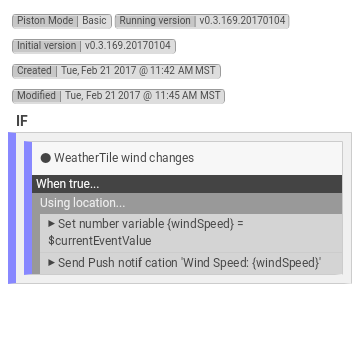 Does yours work. I have it set up just like this one and all zero’s and I am watching the wind change

Yes, I get the notification. I go to Weather Tile and hit refresh, then I get the pushed notification if it had changed from previous value.

Here is mine…looks the same to me 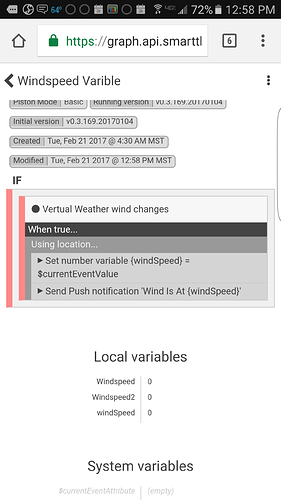 It does look the same, only difference is our device.

I am watching the wind speed change so I know it is kicking out info. CoRe just is not grabbing it. I guess I can try a weather tile which is pretty much what I have already. Can you let me know the device that you have loaded

I guess I will delete it and try again. I wish I could see some logging

You can try enabling debugging/trace on the piston and watch live logging.

So here is the deal and I did this by accident. I deleted and put it in again. Except I hit temperature instead of wind speed…and guess what…after refreshing it gave me the temp. I changed it back to wind…and nothing. So there is something going on

Log in to IDE and go to Live Logging tab.

yea found it. nothing is being picked up by the core. I can see where all the info is coming from the weather tile

The Weather Tile device shows up like this in live logging:

CoRE depends on the device handler to give correct info so if there’s something malformed in the dh’s data, CoRE might not pick it up.

can you send me your device handler or point me to the location of the one you are using. I could not find just the Weather Tile. I think that is pretty old. Now it is called smart weather tile. Here is what I am finding.

Humidity, Illuminance, temp and water it will provide. Any of the other variables with the little house by them…none of them work

Edit: And there is this one if you have not seen it yet.

UPDATE: Here is how it looks on android from users below: [image] To install follow these steps: There are 2 ways: 1) copy and paste , 2) update from repo This is easy but be careful when you copy the code because cut-and-paste breaks the ° symbol in the source and you end up with a q…

yea that is the one I am using and again all I can get is temp, hum, water and ILL…all the other stuff no go