it begs the question…what is the point of putting in this battery backup? It seems like it should be totally isolated with a mosfet or something and enough capacitance to keep the hub on while it switches to the backup?

Was stunned when I discovered this morning—on the SmartThings Facebook group, of all places—that the garbage RayOVac batteries supplied with my v2 hub tend to corrode after a short period of time.

Here are mine in this photo.

There are literally dozens of group users who have had this same problem. Why zero heads-up on this problem from our pals at SmartThings? You would think an email would be easy to do.

Now I have another calendar event to create so I can periodically check on the batteries. Sure thought this home automation adventure would see less maintenance vs. more.

I have that combination and checked my batteries earlier - corroded. The hub was first set up on 10/21/16. 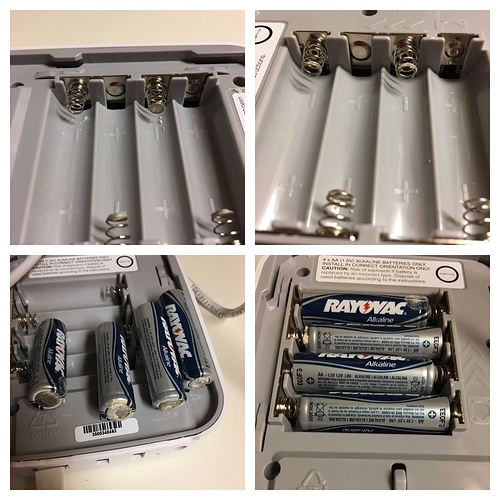 I just happened to be starting the process of rebuilding my Zigbee and Z-wave networks for troubleshooting and noticed my stock batteries were corroded. Just got the hub in mid-October, so it’s only about 3 months old. We did have a 2 hour power outage last week; not sure if that’s connected or not.

If anyone has a recommended UPS I think we might want to look at those as well!

I just got the UPS that was recommended upthread. It’s fairly compact.

2 days ago I found that mine have leaked too. The battery cover was stuck from the dried stuff and very hard to open. 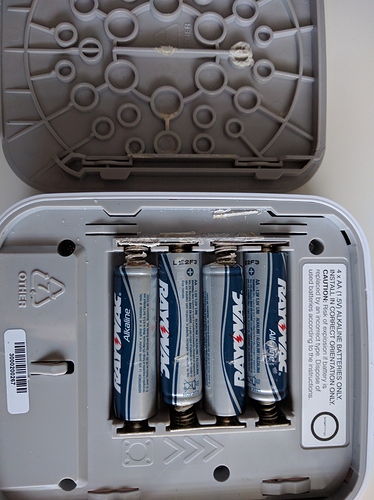 This prompted me to check too and found them to have leaked and corroded too.

Cheap nasty batteries. Lucky to have seen this otherwise could have caused lasting damage. Seeing that there’s no v2 hub replacement tool, it could have been a painful process.

Replaced with energizer AA with their no leak guarantee.

My guess would be overheating.

It’s not the batteries, it’s the hub. Since the last update I’m chewing through batteries every two weeks. Someone on the FB group checked it with a shunt and the draw while the unit is plugged in is enough that the batteries are depleted approximately every 15 days. My hub is running is failing to run routines reliably anyway, so I didn’t bother to replace the batteries when I found them dead again last Sunday.

Replaced with energizer AA with their no leak guarantee.

I think it’s safe to say at this point that the V2 hub has a serious design issue that causes either premature battery discharge or overheating, or both. I would not recommend leaving batteries in the hub under any circumstances.

Agree. Everyone with ETH-200 and/or Rayovac batteries should remove them until a resolution comes about

I think it’s safe to say at this point that the V2 hub has a serious design issue that causes either premature battery discharge or overheating, or both. I would not recommend leaving batteries in the hub under any circumstances

I updated the thread title because there are now many reports of batteries leaking and this seems like a good place to consolidate the posts.

The hub is a year old and the batteries the same. I definitely had no problems with the batteries around November when I last looked so this has only happened recently. I’ve also seen people mention that their new hubs bought in the last couple of months are also showing leaking batteries.

So could this be caused by a recent update to the hub?

Just checked my batteries and they had leaked.

Installed new batteries a couple of months ago and they are now at 0.1V to 0.25V per cell, and batteries swollen and leaking.

Checked voltage in the battery holder without batteries, and read 0.0V so there is no current going from hub to batteries.

Will check current later with external battery holder to see if there is any current flowing from batteries to hub with hub power supply active.

Can the hub check the battery voltage and notify us if they are low or dead?

Sounds like somethings gone wrong with an update. I’ve had no issues with batteries installed for the best part of a year. Then suddenly people are finding new sets of batteries draining to dead in two months.

Can the hub check the battery voltage and notify us if they are low or dead?

No. It’s definitely a requested feature. My hub is only a few months old and while my batteries didn’t leak, they were completely flat despite the hub being on a UPS

would lithium batteries have the same problem?

would lithium batteries have the same problem?

Lithium batteries are less likely to corrode but more likely to catch on fire. So I would wait until the problem is better understood before relying on them.