So, when I was browsing Amazon the other day, I saw the Centralite Pearl Thermostat on sale. The sale price was about $125 less than what I originally paid for my Zen Thermostat. So, I purchased it.

All I’ll say is ‘holy batman’! The Centralite Pearl Thermostat is rock solid and changes modes almost instantaneously. Now I can get rid of the backup Routines I was using with a virtual thermostat device to set the old Zen Thermostat when it didn’t change modes when the main Routine ran. I’m going to keep the virtual thermostat for a while since SmartThings advised that I have to remove the beta Edge device, unsubscribe from the beta Edge driver, and re-add it to get the Production Edge driver to install when it becomes available.

Just now, even before Alexa could even finish announcing that it was ‘turning off the thermostat fan’, I heard the Centralite Pearl Thermostat click and turn off the Fan. That’s really FAST!

I used to use the Centralite Pearls as well. Unfortunately after a few years they did start to “lock up” where I had to pull it from the wall to “reboot” them. I also had one where a relay got stuck and the AC never shut off. I did like them for quite a while, but now I’m using LUX zigbee thermostats and they’re very good and fast.

Well, after almost a week using the Centralite Pearl Thermostat, my thermostat Routines have worked flawlessly compared to the Zen Thermostat. Not bad for a $40 thermostat that doesn’t retire a ‘C’ wire or external power brick.

The only thing it does not provide with the SmartThings Edge beta device integration is showing the battery level, and the operating state status showing when the thermostat is cooling or heating. So I switched over to the DTH driver to see its device page integration, and it didn’t show them either so this thermostat apparently isn’t capable of these features. So, I switched back to the Edge beta driver since it runs with local execution.

The Pearls will show operating state and battery, but you need a custom DTH. You can try what I was using until Groovy retires, and which of course is not local. I tried to find an image showing operating state, but no luck.

EDIT, I think I found an image from this past winter before I swapped over to LUX: 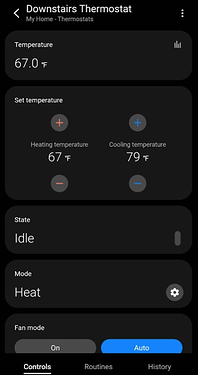 What routine management are you all using with the Centralite Pearl? I paired one tonight to replace a CT101 (Iris) that was non responsive, and SmartThings found it pretty quick, and boy it’s fast. But, my rBoy 5/2 scheduling app won’t see it when I “select a thermostat” - it only sees my downstairs CT101. Google and Alexa have integrations with my ST and see the “Upstairs Thermostat” just fine.

Thoughts on how to get my schedule working again with the Pearl?

I’m not using any daily schedule. I have two Automations for ‘It’s Too Cold’ to turn on the Heat, and ‘It’s Too Hot’ to turn on the AC. And my Armed/Away just turns it Off, but I have two Disarm Automatons depending on what time of year it is to turn on the Heat or AC by using @Mariano_Colmenarejo Virtual Calendar (link below). I use the Virtual Calendar’s UTC Offset as restriction Condition for when it’s either Summertime or Wintertime for the various Automations since I’m in a country that still uses local daylight savings time. If that wasn’t the case, then I’d use the Virtual Calendar matching various months of the year as the restriction conduction for the Automatons. I also just leave the Heat and Cool temperature settings the same all the time.

It is summer time on the Northern Hemisphere, people do not realise sun state changes, as it is really out of their interest by having long hours of sun. If you did it wrong then anybody else can do it wrong, and at the end it leads to frustration from people who are starting with home automation with SmartThings. (because they think that must be the easiest for their use, and then they realise that a simple sun state is not working…) What could be done is a custom capability that emits a value at sunrise and another at sunset. To make it usable with positive and negative offsets, something else would have to be added, perhaps two capabilities with +/- time refence to sunset and sunrise emitted every minute. It could be a custom capability as minutes to sunset or minutes to su…