Can I control a Ceiling fan w/remote only

I determined I can’t use the fan and get the type of automation I need after reading some additional information - the wireless controller/receiver is proprietary.

There are a lot of ceiling fans on the market. Is there a compatibility list of fans that works well with the z-wave switches? For example I found Minke Aire has some nice ceiling fans but now I’m not sure how to determine compatibility.

if there’s no compatibility list, what fans are the members here using? maybe I could shop those brands.

I bought a minka aire fan and replaced the remote receiver with my own devices: aeon dimmer for the led light and GE fan controller for the fan. Works great!

Hi, thanks for the response.
I’ve picked out a few nice Minka Aire fans. Can you provide more details about “replaced receiver with my own devices” Besides the dimmer and fan switch did you need anything else? I have the GE fan controller and a GE Z-Wave enabled light switch. Do you think I would need anything else? Did the unit you purchase support a wall switch or was it a remote only fan? Really appreciate the information.

Update: I purchased a Minka Aire fan – I’m pretty confident I’ll get this working since others have done so. Should have it hooked up in a couple of days.

I assume you have two cables (both black/white/ground) going to the fan since you bought two switches. Then you are all set, I had only one existing wall switch and one cable (black/white/red/ground). That’s why I used an aeon relay.

For your installation: The Minka Aire fans usually use black for the fan motor, blue for the light and white for a neutral that is shared between light and motor. So instead of connecting the cables to the little control module that goes above the fan motor, you just connect directly to the cables from your switches. Connect both neutrals coming from the switches with the neutral from the fan, connect the black and the blue cables to the respective cable coming from the switch.

For the ceiling fan switch, there is a great device type by @ChadCK
https://github.com/ChadCK/SmartThings/blob/master/Device-Types/Z-Wave_Smart_Fan_Control.groovy

Thanks for the details. I’m no electrician so maybe I don’t understand my setup correctly.

At the ceiling I have black,white,clear and red. The red was not originally used for the fan. The original wall plate had two switches. The first one was a regular light toggle switch where the red wire was the load (presumably) to the ceiling fan which had no light. Therefore the switch did nothing. The other wires, including the black load wire, are run to the ceiling to control the original ceiling fan. So, I’m not sure if I have 2 cables but I know I only have 4 wires at the ceiling.

Seems to me it should work. I have 1 wall switch that will energize the red wire (turn on the light) and another switch that will energize the black wire (turn on the fan) and they both share neutral and ground. Will that work or do I need the relay like you did? The “light” switch I purchased is: GE Z-Wave Wireless Lighting Control Dimmer Switch. So is this similar or the same as the Aeon dimmer switch you used?

I already installed ChadK’s very nice driver code you mentioned and started to write a little smartApp to connect my Nest and the Fan together.

Edit: I found an image that shows the way I think it will work. My switches are obviously the GE fan and dimmer switches instead of the toggle but the wiring will be identical to this:
ceiling fan wiring diagram-two-switches

The wiring diagram (nice!) is basically how I wired my fan and light (except that you will have to connect your fan and light switch also to the white neutral).

Just wanted to follow up, install of the hardware and ST stuff went perfectly. My little ST app is also working.
Thanks for the wiring assist - i got a little nervous there I didn’t have the right setup.

Do you think this would work for other brands? I have a ceiling fan with a proprietary “receiver” wired in at the mounting bracket. And what you are saying is to replace that with a dimmer for the light and a fan controller for the fan lights? It would be much better to control with ST rather than proprietary remote.

I could just put a switch in, but then I would have no control over fan speed; or fan/light independently.

This should work for any brand. The controller of the Minka Aire fan was proprietary, too. I suggest you double check the fan installation manual for how it is wired but usually there should be no problem.

And yes, if you just want on/off functionality you could just use a switch.

Just remember not to use a dimmer for the fan (reasons discussed in other posts in this forum) because it will break the fan motor, use a specific fan controller. Dimmers are only for lights.

Great thanks. And did you wire both up in the canopy of the fan? 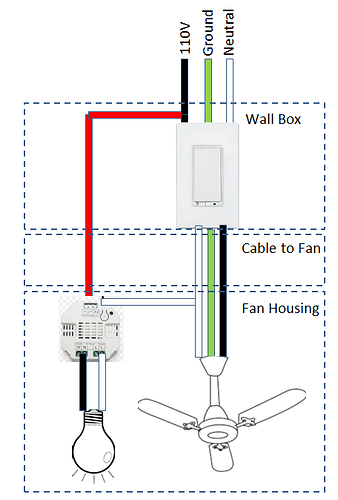 Thanks for the diagram. Unfortunately with my fan model, the receiver is required to be wired inline between the fan and the electrical box. I think from your diagram, everything will have to fit up in the fan canopy and/or electrical box.

Here is the OEM wiring diagram for the fan: 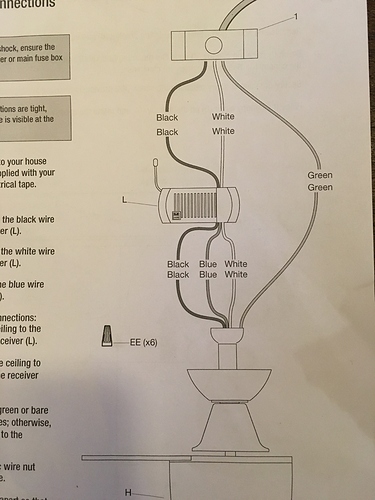 This thread is great. So many ideas. I currently have a fan that is controlled via a GE wave fan controller. Works great, but the fan shyte the bed. Unfortunately, when I replace it, The Minka fan I have my eye on uses its own in wall dimmer to remotely control the fan for speed and light. Mina says they have no plan for wave control, thank you very much.

So is there any reason I can’t use something like this to control the fan for simple on/off? 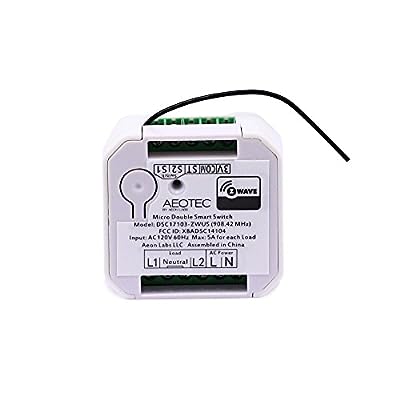 I assume with power on, the fan resumes whatever state it was in prior to power off. That’s good enough for me.

For minka aire fans the blue cable is usually light and the black one is for the motor. The white one is neutral shared for light and motor.
http://minkagroup.net/sites/default/files/product_manuals/F518%2C%20F519-English.pdf

Please look at th manual (link) in the post above. The remote wall switch is nothing but a regular battery powered remote control that is in a wall box.

So you may be able to continue using your GE switch for speed and use a single relay for your light if your wiring allows.

If you only have black and white (+ground) going to the fan, the Aeon relay is probably best.

So I’m looking to add a ceiling fan in our bedroom, and appreciate all the info and effort you’ve done so far. I was looking specifically at a Minka Aire with a custom controller built in. The wiring diagram in my manual doesn’t show any of the wires between the controller and the fan/light, but I imagine it’s the same as the one you posted.

With the Minka Aire fans, it seems as if the directional control is controlled by the remote only. I don’t think there is a physical switch for this. How, if at all, do you setup the fan to change direction when you remove the controller? How did you setup the direction initially or did it just work out?

Hi Zack,
It’s been some time since I installed the fan so my memory is a bit fuzzy. I can tell you in my setup that the fan direction can only be changed from the switch directly on the fan (

). It would have been nice to automate this but having full voice control over the fan function, less direction control, is really what I was after. And, I must say, I love it. I vaguely remember a remote coming with the fan but never used it so I’m not sure if It could override the fan switch.

my fan has a physical switch, so I never ran into this issue. I did a quick google search and did not find a good answer of how the fan direction is reversed. It may not be as easy as just flipping the black and white wire…