Camera & Fee for use

Okay, so, I’m new to the home security system & home automation issues (though I have some tech experience (more in the AV world) . . . that being said, I recently purchased both the Arlo Pro camera system & this Samsung Smart Things system (SST) (w/ the intention of integrating the A/V features of the Arlo Pro w/ the other flexibility that the SST offers . . .

That being said, once I got into the set up of the security cameras (thru the SST set up process) I noted a subdued footnote that indicated that ‘camera useage’ w/ the SST system was free ONLY during the Beta Testing Process . . . after that there would be a fee. Upon reading this I called customer services for the SST product line & this was in fact verified by the samsung representative . . . I was informed (1) that there would be a charge for camera usage, regardless of the camera company (samsung or any other brand) & (2) the charge would be ‘PER CAMERA’. . . .

I hope I’m misunderstaning this . . . because if not, this is nuts . . . what’s the point of going the DIY process if you have a system (like SST) that basically says ‘oh, go ahead and use our full featured product for now, for free, but some time down the road we’re going to rip you off w/ camera fees’ . . … *Please someone educate me & tell me that I’m misunderstaning this . . . otherwise, my entire SST system is going back very soon . . . . . . What a crock.

Thanks to anyone who takes the time to read my rant (and my apologies for the over enthusiasm) . . . I’ve been messing w/ this for some days now; & to find out this . . . . ‘bout made my head explode.’

That’s if you use ST’s service for cloud storage. I have a foscam c1 and a Dlink (forgot which one) running using device handlers available on the forum, the footage is stored on a local ivideon server and remotely accessible through through the ivideon app. I am also using the Camera’s as a motion sensor in ST.

Respectfully, I tried to clairify this issue (as I currently have all four Arlo Pro cameras up and running find) & I was told to even access the camera features (under “Security Settings”) would be where the fees come into play . . . had nothing to do w/ cloud storage . . . so I was told. I apologize for disagreeing (& perhaps I’m just not understanding) . . . but she said the fees would go into effect AFTER the Beta Period (to which she couldn’t answer when that’d be). . .

No worries, no disrespect at all. @JDRoberts should be good resource on this as well.

thanks for your understanding of my ignorance on this issue . . . I truly do hope I’m wrong as I like both systems . … .

So far, what they’ve said is that it’s the smart home monitor feature that will be charged for. That is, the ability to view the camera screens inside the SmartThings mobile app.

But if you just attach a Camera to SmartThings that should work same way it did before smart home monitor was introduced. You can’t view live video or video clips through the SmartThings mobile app, but you can view them through the cameras own app, and you can still work with the camera as a device if there’s a community built integration for it.

If you use the quick browse list in the community – created wiki and look for smart apps and device types for cameras you’ll be able to see how people are using Cameras separately from the smart Home monitor feature.

As far as the Arlos, I don’t honestly know how that’s going to work since that’s an official integration. But they also have an IFTTT channel/service, and that shouldn’t be covered by the SHM issue.

I wouldn’t worry about charges anytime soon. Until the platform stabilizes and SHM turns into a real security solution I highly doubt they’ll start charging. I would buy lottery tickets because you have greater odds of winning than either of the two aforementioned things happening.

Can someone please tell me if this camera, works with SmartThings? 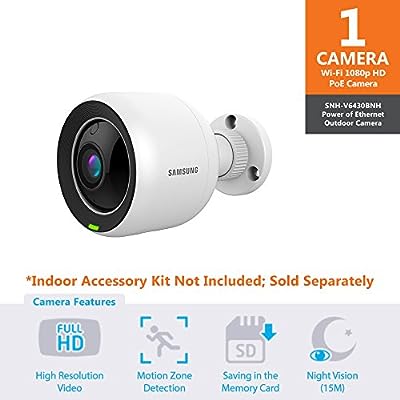 With a 1080p Full HD resolution, a 130-degree field of view, and 50 ft. night vision, the SmartCam SNH-V6430BNH camera creates crisp and clear images, indoor and outdoor, day and night. Whether it's s ...

i dont use shm as smart alarm works better for me with my tweaks. But it would be nice to ingrate the samsung cameras better. at least if i could use the camera motion sensor or play back the clips from the camera. I gave up on the built in recording even if they didnt charge for it, as it streams to the cloud constantly to have that first 30 seconds available before a motion event occured. This overloads most wifi networks if you have 4 or more cameras streaming constantly. Very bad design. If it integrated with the camera motion which does the same and streams to the sd card it would alleviate this. I understand this limits security as they can smash cameras or remove card, but in my opinion that is unlikely especially if the camera sent an alert to the hub on motion detection and it uploaded the last event automatically.

you are incorrect. samsung smart cams have motion sensors both indoor and outdoor models. i have 11 of them between two locations, and have them set to detect motion (there is a checkbox in general) and record to sd card on motion detection… Nothing to do with the cloud,

but thanks for the tip on blue iris, but too much invested now to replace all the cameras.

can the bi app support cameras in two different locations under the same app. Samsungs does… thanks… will have to look into it.

also how does blue iris not overload the wifi network if you have 5 or 6 cameras streaming wirelessly to the central hub? That is the beuaty of the samsung to sd card… no wifi needed till you want to communicate with the camera or view video?

Problem is getting the Samsung cameras to broadcast directly to WAN… You would need a computer running BI at both locations to link it all together.

I have a Samsung HD Pro, use SHN, and it meets my needs. Relative to the camera preview I “thought” the hub was simply buffering the captured data. Again, I don’t know but that would be a major waste of their server…does anyone know for sure?

Yes the hub buffers it, but that means all that data is streaming over your wifi to the hub impacting network performance. Not a biggee with one or two camera’s, but try 4 or 5

I get what you are saying Robin, but my camera on my front door is to catch the jackhole that steals packages off my doorstep or mail out of my mailbox, not a sophisticated criminal who jams my wifi prior to breaking into my house.

I would argue that something that generates a near-field modulated signal capable wide band enough to cover bands from the 700mhz through 2.4GHz bands, to actually effectively jam wireless communications would be pretty dangerous to use in close proximity and certainly well beyond the means of a package stealing criminal.

Yikes!! It sounds like an interesting tool but make sure you have had all the children you plan to have before turning it on!