Has anybody seen (or preferably used) one of these new Brightswitch devices yet? They look like a platform agnostic version of the Wink Relay. Seems pretty cool. Any thoughts or ideas?

Auto-Learning Algorithms
Learns your usage patterns and automatically turns lights on when you need them.

Proximity detection/motion sensing/scheduling
Turn off your lights when you leave the room, or when no one is using it, as well as set up different brightness levels for specific times of the day/night.

Voice control
Control your switch without touching it. Built-in capability to control Brightswitch (or lights associated to that switch) or control through Amazon Echo or Google Home (3rd party hub required).

Interesting. It’s hard to tell if it’s a z-wave hub or just an end device. They say it can control 4 other z-wave switches, which sounds like a hub. But also say it connects to other hubs like smartthings, wink and Vera.

I use ActionTiles and Fire Tablets. Much cheaper and way more useful.

It’s actually quite a bit more than the wink relay, as it is itself a Z wave dimmer switch. With an android tablet on top and includes an intercom function and some sensors. They have a patent pending on some of it.

It’s an interesting device, but I think it’s just overpriced now. They started with a list price of $199 per switch and now it’s come down to $179, but still expensive.

It is certified for Z wave.

Personal Compliment your home décor with a beautiful 5” touch-screen LCD, which you can personalize with pictures and themes. Install and run Android apps right on the switch, making it easy to use your Internet telephone, streaming music,...

The other thing is that the piece that goes inside the wall is very large. It’s not going to fit in every switch box.

I’m not crazy about the look of it either, I’m not sure why. It does sort of look just stuck on the wall. But then so does the Wink relay.

I think there will be some people who love gadgets who are attracted to this. Certainly it should be able to run action tiles or the SmartThings app or both, which is kind of cool. I Just don’t think it would fit my budget. And I would like to hear some more real world reviews on it. But it’s interesting.

As far as smartthings integration, it should pair just as a regular Z wave dimmer. I don’t know about access to any of the other functions.

Interesting. It’s hard to tell if it’s a z-wave hub or just an end device. They say it can control 4 other z-wave switches, which sounds like a hub. But also say it connects to other hubs like smartthings, wink and Vera.

It controls other Z wave devices through association. It’s not a hub, but you don’t have to have a hub with it if you’re only going to use it with a couple of other switches. See the conformance statement I linked to above.

Ah, that makes sense. It actually sounds like a blend of the Noon switches and regular z-wave. It offers a lot more functionality than Noon at a similar price point.

I use ActionTiles and Fire Tablets. Much cheaper and way more useful.

ActionTiles on a fire tablet are cheaper, but they don’t do three things that this does.

First, it is an actual light switch, a Z wave dimmer. That’s interesting, and useful in its own way, as you are powering the tablet from an existing switch while also gaining network control of that switch.

Second, it has an easy-to-use intercom function between two of these.

Third, it has a built-in motion sensor as well.

I don’t know how well all of those features work, I’m just going off the specs on the manufacturer site, and again I would like to see some real world reviews of it. But the feature list is impressive and I do like the combination of a switch with the tablet functionality.

Well… I’m impressed that Brightwitch has made it this far. If I recall correctly, they started with crowdfunding that had some struggles. Or maybe I just thought the price was a challenge.

But their challenge now? Obviously the $21 million funded Brilliant (brilliant is brighter than bright, right?).

The Brilliant Control replaces an existing light switch to give you touch and voice access to lighting, music, and other smart home products. New for 2018!

Well… I’m impressed that Brightwitch has made it this far. If I recall correctly, they started with crowdfunding that had some struggles. Or maybe I just thought the price was a challenge.

But their challenge now? Obviously the $21 million funded Brilliant (brilliant is brighter than bright, right?).

Let’s wait and see what Brilliant has when it actually ships.

Let’s wait and see what Brilliant has when it actually ships.

Meanwhile… Brightswitch was crowd-funded in 2014 and has only delivered to a handful of backers so far. 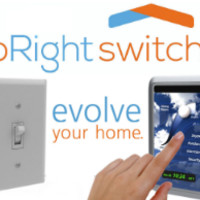 Bright Switch: The next generation of wall tech.

Replace light switches with beautiful images and powerful touch-screen commands. | Check out 'Bright Switch: The next generation of wall tech.' on Indiegogo.

That looks like a pretty interesting product too. I think this space is going to be interesting. As of now, the underwhelming Wink Relay is the only real “product” that is readily available. I can’t wait to see when a few more of these get out of vapor mode.
It can’t possibly be very long until Amazon releases their own. The already have everything the need: Echo technology, manufacturing to make millions of Fire tablets, hooks into every iOT service under the sun, and the actual ability to produce and fulfill real live products.

Yikes. That’s the problem with all of this stuff. Everybody can make a clever video and a nice pitch deck. Can you put a product in a box and ship it?

I wish these companies would start offering the option of Alexa or Google Assistant on these devices. Whether it’s a separate SKU or a setup option that activates one or the other. I realize Alexa is the more popular of the two right now and it makes sense to go after the biggest user base.
I just really don’t want to end up with two different voice control assistants in my house. I’ve got enough accounts spread across the various devices I’ve got hooked into SmartThings (Ring, Botvac, Garadget, Amcrest, etc.), I don’t want to add another because someone makes a device that’s only compatible with Alexa.

I have a BrightSwitch and it’s pretty cool! It’s basically a low budget android phone/tablet designed to be mounted through a light switch box, with the addition of being a Z-wave switch, controllable through a hub such as SmartThings or Wink.

I purchased mine through a pre-order after their Indiegogo campaign was over.

I don’t know the specs but there is not alot of memory. I’ve found that there is room for about 5 apps and I can confirm that the following apps work on it:

As a light switch:

It also has a camera and microphone that can be used with apps. The camera can be physically blocked if you are concerned about privacy.

I thought I remember them saying that Alexa may eventually be integrated, but it is not as of now. They do have their own voice activation, which I have not tried yet.

It is pretty large. Much larger than a regular light switch. The installation allows it to be offset so that it can be installed on one side or the other of a multiswitch wallplate. That being said, you would need their custom wallplates that extend to the height of their device.

I also have Brilliant switches on pre-order. From the pictures, they look smaller and more refined for multi-switch locations. However, I believe they use Linux as an operating system and they would have to make their own version of every application that you want to use. As far as I know, they only have announced Sonos and maybe a couple thermostat compatibilities For me, it’s nice to have full access to my actual SmartThings app and control my stereo with it’s app through my BrightSwitch. I don’t anticipate the Brilliant Switch having a whole lot of compatible devices being able to be controlled through it right off the bat. They are currently giving a generic Fall 2018 availability, This doesn’t make me very confident they will be shipping before the year is over, since their previous estimate was September of last year.

If people have specific questions about the BrightSwitch, I may be able help you out.

Four years to the month since I funded Brightswitch for 3 Brights, I received a shipping email from them saying a package is on the way. So maybe I will finally receive my Brights. It shipped by Fedex ground and I will not receive the package until Feb 12th. I waited 4 years, what’s another 10 days?

Exactly 4 years to the day (Feb 9th) since I funded bRightSwitch, I received 3 Brights. I have not had time to try them out, maybe this weekend.
@buyerkurt, were you able to add them to SmartThings? If so, how did you do it?

No, I haven’t. The user guide at www.getbrightswitch.com/userguide shows how to do it but my smartthings hub does not detect it.

OK, so just I unplugged my SmartThings hub and used an extension cord and long ethernet cable to relocate my ST hub right next to the BrightSwitch. I followed the directions as written and it paired fine. Put the SM hub back to its normal location only 20 ft away and now it can’t connect to the BrightSwitch. That’s pretty pathetic that a device powered by 120VAC can’t produce a signal strong enough to reach my SM hub. I don’t think I have any other Z-wave devices on my network, so hopefully you have better luck with signal strength.

FYI, it connected as a plug and not a dimmer
switch, as the literature suggests, so no dimming.

I installed one of the Brights over the weekend and did some tests with it. It’s an interesting device with lots of features. If this switch was released 3 or 4 years ago as was intended, the features would have been awesome. However with today’s technology, it is easier to use Alexa, other smart switches, or ActionTiles to accomplish the same things much easier. I will likely just use them as z-wave switches. It paired with SmartThings quite easily as a “Z-Wave Device Multichannel”, whatever that is. But I am able to control ON/OFF and Dim functions. The only functions that were exported to ST was On/OFF and Dim. Nothing else.