Any way to restart a cablemodem thru some ST magic?

I’ve got a v2 hub… in theory this bugger can do things down in local mode… right?

would it be easy to implement a smartapp that would log on to the router’s web interface to restart it every say… weekday at midday while I’m sure to not be home?

Not easy. Since any custom smartapp runs in the cloud not local.

However there are some power strips that can do a reset command. Toggle power off and back on in a single command. So that’s about the only route.

No aware of any officially supported options. But several higher end units can do it. Not cheap though.

power strip… or a simple smartplug could do? just thinking outloud here…

I’m with Danielccm, a pocket socket with an automation scheduled once per week at noon or something would be the easiest solution I can think of.

How about this plug?

Nice! IF only they had an european plug too! lol! (did I mention I’m in Spain?)

So… Using a smart plug… The automation turns of the plug and your router turns off… Now you have no internet.

How do you turn it back on?

touché! ugh! back to the drawing board…

Personally, I would spend the money on a better router.

Thought about this and laughed out loud! But does not have internet effect local processing? If your smart plug runs locally then using something like smart lighting should work right?

I have a backup network in both my houses.

I use at&t access point (netgear), and then wireless switches on my wifi router and cable modem.

These switches go over/are paired with the 4g wifi from the at&t access point.
It shares my data with my other cell phones. It basically doesnt use anything … costs an extra 20 per month. well worth it as i can reboot the main wifi stuff , and have.

I have tried about 5-6 different wireless switchs most have issues. the wemo only work in one location/network
the edimax work in multiple locations but after power outages come back off NOT in the last state (as do almost all of them, ie belkin )
Neo switches just don’t work and drop off the net and also come back Off after power outages.

The only one i Have found that works in multiple locations and also comes back in the last state( ie on if it wasx on) is the TP-link. 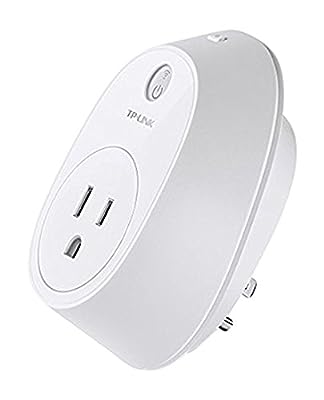 Control electronics from anywhere using your tablet or smartphone, track real-time energy and historical energy use and save on your next bill with the Wi-Fi Smart Plug with Energy Monitoring from TP- ...

I also have one of these swtiches on the att access point paired with my main wifi wireless so I can rerboot it as well if need be.

The fineal think I do is run the access point without a battery on my ups as well as the smartthing hub, otherwise you cannot reboot it if it has its own battery.

Thought about this and laughed out loud! But does not have internet effect local processing? If your smart plug runs locally then using something like smart lighting should work right

In theory yes… In theory.

Theory is one thing…

I think you’re better off with a mechanical timer

Okay, so plug your cable modem into a power strip.
Train your dog to push the power strip button on/off on command
Use the methods mentioned in this thread give your dog the appropriate command:

How can I yell at the dog? Devices & Integrations

So I really don’t want to spend a couple of hundred for one of those “See and Talk to your dog” things… I want to yell at my dog to get off the rug… I have blink camera in the living room, and I of course get the motion alerts, and there is my dog asleep on the area rug… that she would not set foot on if we were home. Can anyone think of a non expensive way to be able to yell at her remotely? Thanks

The resetplug monitors the internet connection. If the connection drops it power cycles the socket.

If it fits your use case then you could use travel adaptors, the socket appears to be rated 90-260v.

Depends on what you mean by banans

interesting! I’ll take a second look at that plug!

Are you using a UK ST hub (with uk power plug)?

UK ST Hub yes… with a euro adapter to Spain…

Another possible option if you have a land line: