Mmm, got me curious now, don’t see, was it there before? You still can in the API.

I see them listed in Home>Settings wheel.

Some issues have been around since April 2016. Continuing from https://community.smartthings.com/t/android-2-1-2-2-1-3-issues/45964 Please keep this thread limited to specific issues. Report each issue as a separate reply with this format: Phone Model: Nexus 7 & 4, Asus Zenfone Phone OS: Android Phone OS Version:6.0.1 Issue or Bug: DTH’s Value Tiles no longer take into account the line feed (’\n’) in label value Example: ‘Mode\n${currentValue}’

I just retested the same issues and they are not fixed in Android v2.2.0.

To all, please submit your 2.2.0 issues in that thread with the same format.

While ST is paying attention to it’s Apps, how about enhancing some Widgets. The only 2x2 existing one is too big and ugly. There could be more also, shortcuts, assignable switches, routines, etc.

Better widgets would be nice! Even ios got a better routines widget than the current version of Andro

While it’s not directly from SmartThings, you might consider SharpTools which is a set of Widgets and Tasker Plugins for SmartThings. Several thousand community members use it and the widgets are really easy to setup. I’m the developer of SharpTools, so feel free to PM me or tag me in a thread (@joshua_lyon) if you have questions.

I really like sharp tools on fire tv - very convenient! Thank you joshua

We have a planned release at the end of the month

Was the removal of adding new modes an accident or intentional? It looks like we can only do it in ide now…

Is it just me or I can no longer be able to create mode with this update?

You can still do it through the IDE. Nobody’s found a place yet to do it in the mobile app, neither android nor iOS. If it’s in there, Hopefully someone will post where they found it.

Meanwhile, here’s how you do it through the IDE:

@brianjlambert Ouch! You can still do it through the IDE, but it’s not intuitive. click on “community” at the top right of this page. Two) click on “developer tools” at the top right of the first page of the community section. Three) sign in with your SmartThings account choose the “my locations” tab on the list of your locations, choose the one where you want to add a new mode. This will open its location detail page. [image] scroll down until you see the list of your existing modes. It’s not obvious, but there is a clickable link called “create new” at the top of that list. Click on it. [image] this will open a page where you will be able to add a new mode. [image] @slagle if there is some new way to do this through the SmartThings mobile app that you guys just…

Each update I am hoping that text rendering and text position in tiles is fixed but alas it has not yet been addressed. 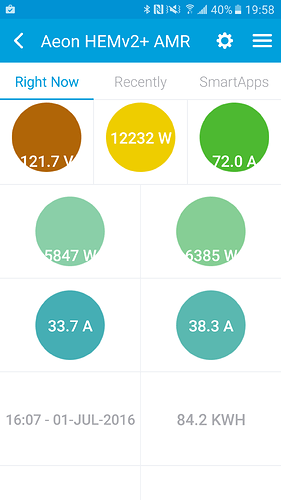 Also, once you have lots of devices in your house controlled by ST, it is no longer feasible to give them short names… “fan” becomes “Master Bedroom Fan” so you know which one of the many. This is especially critical when using Alexa as the names must be unique and stuff like “MB Fan” doesn’t really work… but might be a fun game to play 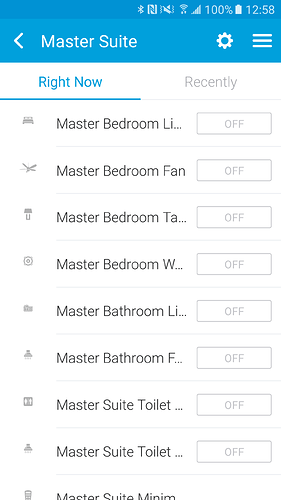 Would it be possible to reduce the font size so more of the label can appear? User selectable font size might eliminate some of the issues with different phones/resolutions and eye sights Also, the icons (ie: check out my range hood fan to indicate toilet exhaust fan…

) are really small and the variety is very limited…

Thanks for the update! It is great to see progress in the right direction

Shouldn’t have made it into the app. Disregard. Sorry about that.

Thank you, thank you, thank you! I cannot tell what ANY of my multipurpose sensors are aligned to. All I see is multipurpose - annoying - and I Want them to say what the device is there is logic in my naming convention and Grouping, differentiating physical devices and virtual 's (ie: garage door ). Sometimes it is the little things

I would like to see a better format for a tablet. Landscape mode???

I would like to see a better format for a tablet. Landscape mode???

This has been requested for almost 2 years. I don’t know why they haven’t done it.

Anyone really wishing for support for tablets? I have a Galaxy Tab S and am very surprised Samsung doesn’t have an app for the tablets yet. The current app forces me into portrait mode which is pretty awkward for the Tab S in a keyboard case.

Liking what I’ve seen with this update. Much easier using CoRE now with your bug fixes and also the cached list of smartapps

Since this thread is being monitored for feedback

Could do with some very simple changes though, like the very difficult to read tiny grey text on white. Could we at least make it a slightly darker grey?
Secondly, have been hoping for a way to filter items in the family tab for ages. Please give us a way of selecting who/what we want to see in there.

It you’re on Android you can use an orientation app as a work around. Not ideal but pretty easy to switch from Portrait to (Forced) Landscape and vice versa from the Notification Bar. Also the one I use comes with a Tasker Plugin so you can automate switching to Landscape whenever you open the Smartthings app and you could probably add something like ‘but only when external keyboard connected’ as a condition.
FWIW Smartthings seems to render fine in Landscape mode.
The one I use is ‘Orientation Control’ It is a paid app so hope it’s OK to mention it here on the forum.

Thanks for the information! Yeah, it’s fine to mention paid apps on the forum when they’re useful and relevant to the topic. (It would be pretty hard to discuss about half the things in the android threads if you couldn’t mention Tasker.

) Just if you have a business association with the product, you should mention that as well.

You can still do it through the IDE. Nobody’s found a place yet to do it in the mobile app, neither android nor iOS. If it’s in there, Hopefully someone will post where they found it.

Meanwhile, here’s how you do it through the IDE:

Thanks @JDRoberts. I know I can create it in IDE but not having in the app is crazy. Are they trying to bump up the developer count for the next Sammie show? On the positive sign. It’s much better than the previous version.

A request/suggestion: put the snackbar (the green message “ok you have done this and that”) on the bottom of the screen instead of than on the top
Now, when you configure a smartapp, before being able to press “done” you have to wait some seconds that the snackbar disappear and let you click the “done” or “next” button. Not a big problem when you have your configuration done, but it’s a bit frustrating when you are testing and configuring.

Yea, I’m seeing this as well, and no way to cache it, this makes me less inclined to have a complex password…

Would you direct the director to this please.

I don't know it for a fact, but my system seems very fast tonight! Maybe just needed a good reboot or maybe the update did it. But is moving faster.

Integrate with Google Authenticator or another ubiquitous 2FA, it’s needed…