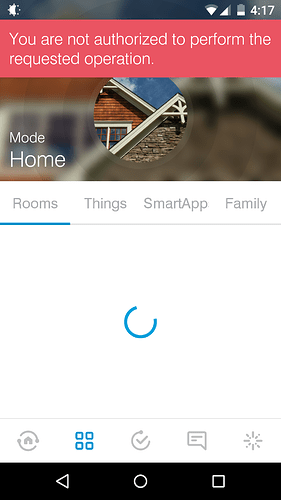 At least the error doesn’t cover up the horrible hole in the wall circle effect that takes up over 1/3 of the screen.

and this is from my OnePlus One with a custom dpi of 360. 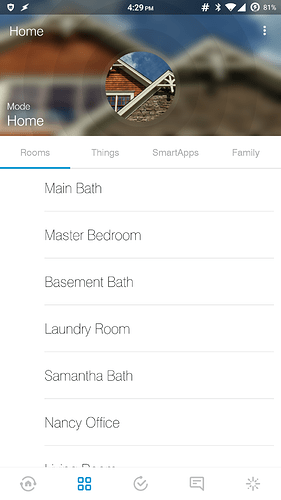 Still takes up a ton of room, but at least I can scroll 6 rooms at a time vs 3 on my wife’s phone (if it was working).

Where did all the things go?, none of the things categories contain any things…
They were here the other day…
So I can’t even add my hues back in, at least you have a few online @pstuart

Where did all the things go?, none of the things categories contain any things…They were here the other day…

Mike I am having this same issue. I used the github integration to download the hue connect smartapp and the hue device types to my repo. I had to change them to the “My Apps” category. I was then able to get my hue stuff back up and running. I am still not seeing any devices in the “Things” section at this time. I have had a ticket in since last night. Make sure you send a note to support@smartthings.com

OK, I admit, I took my hue bridge off of smartthings last week and replaced it with virtual switches because it just was a constant swirling maelstrom of did it work or did it not. And that was before the new mobile app.

So my hue bridge has been working great. Just not with smartthings.

Until you want to put that device in another room as well.

I’m too lazy to look it up, but, once again, I’ve requested this many, many times:

Just like modern OS’s (including Windows) have the concept of a “soft link” (also known as a Shortcut), there should be the option to create as many “virtual clones” of a Thing as you wish, each one of which could have a slightly different view (e.g., the clones of a Multi-Sensor could each have their own default view: open/close, temperature, activity)… but at the very least, a clone can be placed in each of multiple-rooms, thus solving @pstuart’s request!

(And several others requesting the same thing… and what http://SmartTiles.click will permit when multiple-dashboards per account are supported too, by the way…

Whether these are called “soft links”, “shortcuts”, or “virtual clones”, or whatever, I’m sure you understand the concept, but feel free to ask for clarification.

Windows marks shortcuts with a little curvy arrow in the corner of the icon, to distinguish them from the original or “real” object. That same concept can be used here to perhaps reduce user confusion, though frankly, the “hard link” concept can be used instead, where every shortcut is functionally equivalent to the original and the original can even be deleted. The user is only warned if they try to delete the last existing clone. Oh well… Won’t be implemented anyway.

Is there a way to re-order devices on “Things” section ?
At old android app, we can re-order the tile of devices by hold and drag them

Nico. No there isn’t I asked earlier. But adding a period in front of my most used devices moved them up top and didn’t effect anything like Amazon Echo.

Oh no, I think that’s step back from previous version.
Because for me re-order the thing list is important to easily manage my home. And re-ordering not just move to top or bottom.

Already tell support two days ago, hopefully they solve this problem.
Thanks Bernie

#SUGGESTION
We should be abble to change the icons of the routines, i dont see where we can change this, the default ones have nice icons

Also, I don’t see how I can change what is displayed on the list (temperature, motion, humidity, etc). Am I missing something? Old app had a circle on the top right corner, I don’t see it in the new app.

Old app had a circle on the top right corner, I don’t see it in the new app.

Yes… it was removed. Dunno why, but I expect it’ll return in a future update. If you have doubts, contact support.

Also the lights that had it in 1.0, seem to have lost ability to change ramp-rate in 2.0 . Maybe I just can’t find it. And the dimming updates do not appear in the Activity Feed (is that load management?)

I think it affects at least:
Remotec ZDS-110na
GE Link bulbs (though this can be edited in IDE, I don’t know what the acceptable values are).

A few things of feedback:
Note: Only devices I have are a mobile presence sensor as well as a virtual switch I have jerry rigged to a hue. No hub (yet).

Other than that, solid first release. Congrats!

Anyone else noticing much higher then previous app battery drain and network usage using the new app?

Maybe its being in it all the time, but it is the second highest drainer in my battery settings, just short of screen.

EDIT, I checked, the app since install on Thursday has request fine location 52,092 times. That might be the cause?

EDIT, I checked, the app since install on Thursday has request fine location 52,092 times. That might be the cause?

It’s not that bad… 52,092 over a 48 hour period equals only 1,085 requests per hour. 18 per minute doesn’t seem excessive, does it? Every 3 seconds? I guess my android presence will be really accurate.

It’s not that bad… 52,092 over a 48 hour period equals only 1,085 requests per hour. 18 per minute doesn’t seem excessive, does it? Every 3 seconds? I guess my android presence will be really accurate.

Yup, should be able to locate yourself in the crapper now…

In the Android Location settings, are you set to Power Saving or High Accuracy?

High Accuracy. Wasn’t a problem before in the old app.

I use maps a lot so battery savings isn’t really an option.