Amazon updated the Echo app today. They also changed the app name/logo to Alexa. Mainly seems to be bug fixes and an improvement in the Flash Briefings. No changes to the connected options as well as no change on web access.

Of course it is a Friday Announcement. Looking forward to it.

Thanks for letting us know @Tyler!

Go ahead, switch to Wink, have fun with that

Note that this is from someone who currently uses Wink and fully intended to jump ship to ST V2 when it was released… So make of that what you will.

Would love to control Echo with Smartthings…
When door opens, alexa chimes or plays music, etc…

Is that too much, too soon?

Echo and ST not yet?

Would love to control Echo with Smartthings…
When door opens, alexa chimes or plays music, etc…

Is that too much, too soon?

Smartthings or not, Alexa currently doesn’t allow you to set up an output event in that way. Unless you paired it as a Bluetooth speaker but that’s a whole entirely different situation.

It seems most likely that the initial direct integration will be using voice to Alexa as a trigger to cause smartthings events (lights going on and off etc.) to happen.

Amazon would have to change the echo options before we could have the echo-plays-the-chime when the door opens kind of set ups.

There are other devices that can integrate with smartthings to give you sounds as events, including a new Samsung sound integration just announced today:

Echo and ST not yet?

Amazon would have to change the echo options before we could have the echo-plays-the-chime when the door opens kind of set ups.

Try this …“Alexa buy Sonos” and in ONLY two days you can have sonos-plays-the-chime after Alexa unlocked the door and the door-opens kind of set ups.

@wrongbenson once the SmartThings integration comes to fruition I believe many of the device types could be altered for them to do what you want them to do.

For example, right now if I say any combination of “Alexa, (turn on | open) my ___________.” the device turns on or if I say (turn off | close | shut) the device turns off. I’m 75% sure I also tried unlock/lock a while back and that worked as well. So if the device types are customized of have a switch or setLevel capability then it should be able to be controlled with the Echo.

So if the device types are customized of have a switch or dimmer capability then it should be able to be controlled with the Echo.

I make sure all my Devices either have Switch Capability, or are linked to a Virtual Switch.

Even did Hello Home Phrase activation ("Alexa, turn <phrase> on.").

I mentioned this in another topic, but as a quad, I use voice as much as possible. I use all kinds of voice control methodologies, including hey Siri and the echo.

Since smartthings already has the concept of a master switch as a trigger for multiple other events as in “the big switch” smart app and all of its variants, I already use a lot of voice control options where I’m basically flipping a virtual switch and then many things can happen, including mode changes, other devices, hello home actions, etc.

I already use the echo in this way: I use voice to turn on a light that the echo can control and then I use the big switch to trigger other events. The problem I have right now is that smartthings doesn’t pick up the status change for the master quickly or reliably.

Again, as I mentioned in another thread, if the new smart things/Amazon integration does nothing but let me turn on and off virtual switches reliably, that’s enough to give me entrance into the smartthings ecosystem and do almost anything.

I don’t need fancy device handlers or ways to trick Amazon into thinking a thermostat is a dimmer or anything like that. I just need that first domino to fall, and then I can use smart apps or hello home actions to run everything else the way I want, all triggered by that first “switch” going on.

I see on the blog that they just announced Echo integration but the video requires a password and all the step by step instructions send you to a “not authorized” page.

Is this just a mistake or was this a pre-mature announcement?

I’m so excited about this integration hoping it’s the real deal! 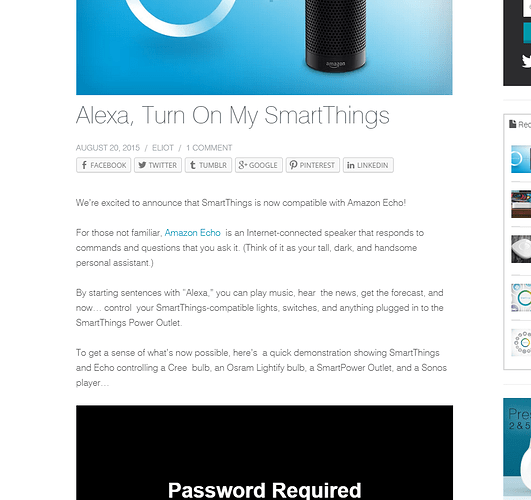 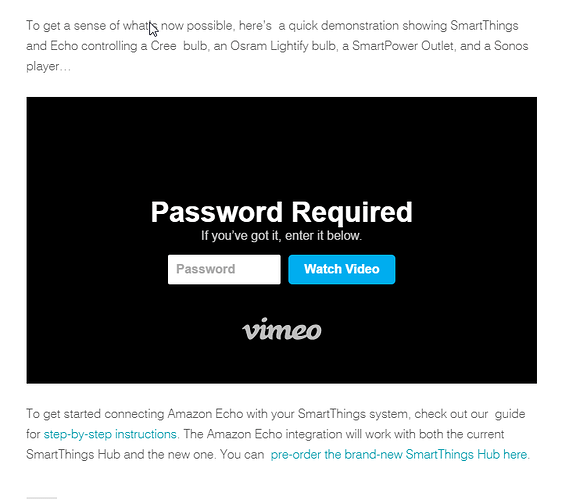 I’m ecstatic to see an official integration! I was working on my own skill for this, but if this works better then I’ll be happy to toss that out

Hopefully this wasn’t a premature announcement…

Echo will truly up the WAF… but not if we start/end the show in a premature fashion… sorry I couldn’t help myself!

Is this just a mistake or was this a pre-mature announcement?

This sentence is very encouraging that this is real! “The Amazon Echo integration will work with both the current SmartThings Hub and the new one.” Waiting for the official Amazon announcement…

It’s definitely coming … I’m just curious if I should tell my wife I won’t be available all weekend or if this is for another day?

Have set up my Wink hub and wasn’t much to it to connect. Even if ST went the “skills” route, that’s not too bad either…The user experience, though, is not that nice if they are using skills. You have to tell Alexa to tell ST to turn on your lights. With connected hub like Wink, you tell Alexa directly to turn your lights on.

…“and that is an Echo joke”??? Did I hear that right at the end of the video? Hope they didn’t have a Wink hub under that table when they demo that!

It does kinda make me wish I would have picked one up for $99 when I had a chance to.