Hi,
I’m trying to add a Aeotec Micro Smart G2 Switch into a 3 way switch that is connected to a chandelier. I tested the wires and the line wire is at the box farther from my chandelier at the bottom of the stairs, and the load is at the middle stairs where the chandelier is closest.

I’ve been trying to follow multiple diagrams and I’ve figured out that the line and neutral needs to go in the middle, while the load and neutral for the load goes on the outer two ports. I’ve read that not having the line and load in one box can create problems. I tried to use another hot wire from another switch that is always on (it’s a 3 switch box), but it doesn’t power the Aeotec switch. When I put it on the line with the neutral there, the device is powered.

So I’m starting to think that instead of using two switches, just use one of the traveler wires and send the load down to the line box along with a neutral.

Would that work? I’m willing to not use one of the two switches if necessary. Here’s some images: 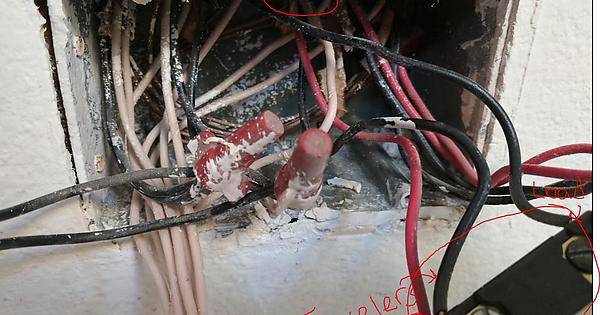 That’s before any changes. I tried to connect the switch to the wire connector on the left (tried both), but while it was receiving 110 V, the light on the Smart Switch never turned on.

This is one way I tried which did not work (the micro switch never powered on):
https://imgur.com/bPkLzor

I’ve tried using these diagrams, so I kind of have an idea how to make it work, but powering the device and getting past the line/load problem has been rather annoying: 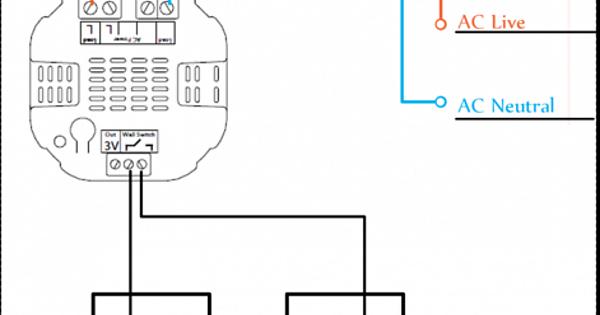 I’d appreciate any advice/help that you guys can give. As previously mentioned, I’m willing to lose one of the switches if necessary and just repurpose a traveler if that’s what it’d take. I can’t pull new wires to the boxes though.

Is this drawing above how you have it wired or tried to wire it?

I have only 1 of these installed in my upstairs hall in a 3 way circuit. Here is a drawing I made about how I ended up wiring mine. Maybe it will help you?

I took me some time to test all the wires and find their exact locations. It works not as well as it could as the updates are slow in smartthings. Someplace there is a thread on how to fix that. just never got around to it yet.

After looking closer it would appear I posted the same wiring as you did in your drawing. So probably not going to be much help.

Was your load and line wire for the light in the same switch box. If not,
do you know if you can use a hot wire from another switch that it always on?

I got mine to work by removing one of my switches and using a traveler as
the load to move it to one switch.

I tried to use a 110V from another switch and it didn’t work, but I’m
starting to think I might have been using the wrong neutral.

No my line was in the light box. That’s the reason I had to use the Micro vice regular smart switches.

I think you need to get a meter and verify which wires are what. You should be able to make it work. Make sure you have the right wires on the C on the switch. I had to use a meter to figure out which screw terminal was the common for the switch.

I wouldn’t recommend getting a line and or neutral from another circuit. I’m sure you could figure out how, but I believe it is generally not an acceptable practice.

Have you looked at this thread on 3 way circuits to see if you could just use switches?

I’ve decided to put this FAQ together to help those with questions about installing GE 3-way switches. Definitions of terms: Line: The hot wire from the breaker (usually black) Neutral: The return wire for circuits (usually white) Load: The wire that will be hot when the circuit is completed to your light (usually black) Traveler: In existing 3-way wiring, this wire toggles hot between two switches. In a smart switch 3-way configuration, a smaller charge is looped through the add-on switch. Some things to know: 3-way wiring for smart switches is different than standard 3 way wiring. You cannot use dumb 3-way switches with smart switches (You must purchase the matching GE add-on switch to wire with your GE smart master switch). If the line is wired into the light fixture, you will …

The switches I found don’t match my current switches in both style and color, so I thought I’d go this route unfortunately. The plus side was also that the microcontroller was cheaper, albeit more of a headache.

I feel like it’s a hack though and it doesn’t give me full control of my switches as I’d me sacrificing one to make this work.

My understanding is a line wire is just an always hot wire? I had tested them with a multimeter, which helped me get it to work in the not ideal method I mentioned above. If I can put the two AC wires on an always in switch and the neutral is also on the circuit the same circuit, would that be fine? So if the light is on circuit 6 but the microcontroller is on circuit 7. Is that what you were warning against, or was that mixing the two AC wires (live and neutral) from different circuits?

I did this job some time ago.
I am not an electrician so not comfortable giving you advice on crossing circuits.

I know it took me a while to do it. I had the parallel wires between the switches crossed once. You have to be sure to get the wires in the right place. Make sure you get the right wires on the common terminals and the 2 switched terminals.

Also be careful with the micro as the switch sensing contacts are made for smaller gauge wires. I believe I had to use small pieces of smaller gauge wire connected to micro to connect with wire nuts to house wiring.

Here is how they say to wire it having power on the switches.

This is where I found the diagrams