What rule engine are you using?

I’m just using smarthings standard smart app. I have not gotten beyond basic webCoRE (installation user videos etc) but haven’t dedicated the time to really investing in getting to know it. If that is the “right” way do do this type of thing i need to get smart about it.

I was thinking that I would need to do webCoRE for some of the more interesting use cases I wnat to implement. IE turn on attic fan when personal weather station inidcates outside temp is lower thatn inside temp and windo or door is open and do not turn on when raining.
Will ist handle that typ of complexity?

Are you using the multisensor to monitor humidity? If so, the humidity alert smart app might work. It allows you to control a switch based on high or low levels of humidity. I haven’t tried it for this purpose yet though.

You can use webCoRE for simple and complex things. It really should be the stock rule engine.

It really that simple in webCoRE

If your U is a thing in ST, you could add
And
U is on

I know your trying to use humidity as the control. Could you not just go simple and when you open the door and no motion turn it all off?
Just need a door sensor, unless you already have it.

I’ve set up a piston to control it, hopefully it will work… I like humidity being the trigger because I want it to run after someone leaves the bathroom to eliminate the humidity, I have motion controlling the lighting though.

I think I’m missing something it won’t shut off. Any ideas? 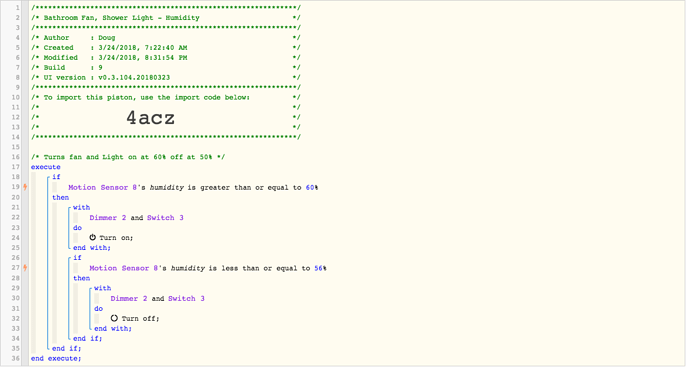 Does the humidity actually reaches below 56%?

You are using conditions and not triggers

Triggers like rises above or drops below makes things happen when the trigger is met.

Conditions will make the Piston run when the conditions are true.

Does this mean that you got the Moen controller to show up in Smartthings? I just got the valves and controller installed (not connected yet), and wondering what I’ll be able to do with it via ST.

No I don’t have the Moen U working with SmartThings

I know this thread is super old, but do you mind me asking how you got your Moen U to talk to other lights and such? I’m trying to do the exact same thing.

I don’t use smartthings any longer other than for my Garage door Opener. The U by moen is discoverable through Homekit, the problem is that they (Moen I think) only lets you turn it off and on, I couldn’t find a way to trigger an automation with it. I had a support ticket with Moen and they thought they might have a workaround but I never looked into it much further. But having said all that, if they had it working in HomeKit to trigger something then you could use it using a virtual switch in Homebridge then to smartthings.

Some Moen models definitely work with apple’s Homekit, I have friends who have them. But you have to have an iPhone for that, there’s no android option.

There is a third-party integration called “homebridge“ which has already been mentioned in this thread. With homebridge you can expose devices which don’t have a Homekit Integration to Homekit, and quite a few community members do that to bring smartthings into Homekit but you can’t go the other way around. But anyway, the moen definitely works with Homekit. That only helps if you already have an iPhone, though.

It also works with Alexa, so sometimes you can use Alexa routines (not smartthings routines) and create a partial integration that way. But so far there isn’t a similar option for Google home.

So it does work with some other platforms, but not directly with smartthings.

@JDRoberts do the people connect the U by Moen to Homekit and are able to create automations in Homekit? I haven’t been able to find a way to do this… I don’t see a plug in for the Moen in Homebridge. Thanks,

Hmmm thinking about it, I think you should be able to do a routine in Alexa and trigger something in another automation package, with a virtual switch. I just don’t like using Alexa for automations…

Hmmm thinking about it, I think you should be able to do a routine in Alexa and trigger something in another automation package, with a virtual switch. I just don’t like using Alexa for automations…

You have to use a virtual sensor, but yes:

@JDRoberts do the people connect the U by Moen to Homekit and are able to create automations in Homekit? I haven’t been able to find a way to do this… I don’t see a plug in for the Moen in Homebridge. Thanks,

I asked my friend, who sent me this:

The U by Moen doesn’t seem to be recognized as something that can trigger an event in Homekit. It can be controlled (turned off, on, temp set) but can’t trigger an action.

Thank you. I found that since I have an identical setup as @douglaspitman I decided to not reinvent the wheel and followed his lead :).

For any that are trying to do something similar. This was what I did.

Note:
-My bathroom and bedroom are connected without a door in between (open walkway)
-I have an Aeotec Multisensor 6 in my ceiling connected to smart things
-I have an exhaust that is controlled by a z-wave switch (smartthings)
-The shower stall and shower shelf are on the same z-wave dimmer (smarthings)
-I have WebCOrE on my smartthings configured

Initial Goal: Have the Moen U shower system turn on the shower stall light as well as my integrated shower shelf.

New objective: Add some conditional logic to get a little “fancy”

Here is some logic I used:

I have other logics built in for different situations such as… bedroom lights are on, and the illuminance is less than 400… turn on shower dimmer at 60%. Etc…

I hope this helps someone else in the future.