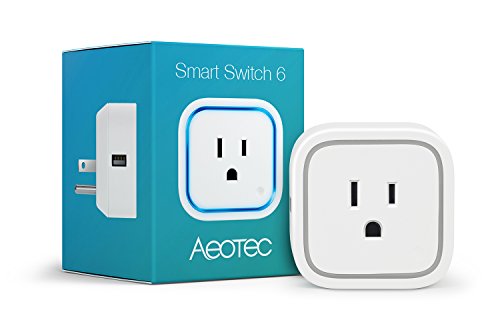 Was thinking about picking one up to connect to my system but I’d have no real world use for it. I’d just be buying to write a driver for it lol.

UNLESS I start replacing my stuff with gen 5 stuff to secure my traffic. Now thats an idea!

I ordered one on impulse and immediately cancelled it.

I remembered my promise to myself that I have to get the electric switches in my house in order first. I am so proud that I was able to put in a Lutron Dimmer (C-L) on my own (dumb one) as I didn’t need the smart switch on the chandelier above my dining table. It was easy as it had proper wiring in place (may be a later addition by the previous owner). But I am getting an electrician over to check my wiring as I am little concerned when I opened up couple of other switches to check what was inside…

Tim, if you have the time, please pm me on how does the aeon thingie works which you put inside the switch box).

I have one running on ST now. It pairs perfect. Works great.

I just got one of these today. There doesn’t appear to be a device listed for this SPECIFIC device in the ST app (there is one for the Aeon Smart Energy Switch cable.
What did you select to join this to you ST?
Thanks for the info.

It pairs as a zwave metering switch I believe.

Or other than size does anyone know if there is any distinct advantage to this model?

I bought the Aeon Labs Aeotec Z-Wave Smart Switch 6, Gen5 and it did not pair unless I had it located in the same room as the ST Hub. The range for operation as an outlet is horrible and I was hoping to use it as a Z-wave repeater for a Z-wave compatible door lock I have installed in the garage that is too far to reach my ST hub in the house. I selected the Aeon Labs Aeotec Z-Wave Smart Switch 6, Gen5 because I thought that I needed support for encrypted traffic to the Z-Wave lock.

I ended up sending the Aeon Labs Aeotec Z-Wave Smart Switch 6, Gen5 back to Amazon because of the limited range (10 feet from my ST hub) and the total lack of support for the device other than a generic Z-wave Reporting Dimmer. And YES, I did read the other forum member posts on installing a custom device driver, which I tried two and they worked when the outlet was close by, but again, since the outlet had to be within 10’ of my Hub, this does not work as a Z-Wave repeater for my Kwikset Lock in the garage.

you pair near the hub then put it where you want it and do a Z-Wave repair and the mesh routing gets rebuilt. Pairing happens in low power mode. This is typical behavior for most devices. The hardwired stuff like light switches tend to work at a greater distance.

I just put out the first release of my code for this device.

The range for operation as an outlet is horrible and I was hoping to use it as a Z-wave repeater for a Z-wave compatible door lock I have installed in the garage that is too far to reach my ST hub in the house. I selected the Aeon Labs Aeotec Z-Wave Smart Switch 6, Gen5 because I thought that I needed support for encrypted traffic to the Z-Wave lock.

Wish I had seen this before. I’ve got a support case open with ST and Aeotec. I paired in the same room but the distance it will work at can be measured at about 9 feet with a wall in between (use an extension cord) at 8 feet it’s good, 9 feet it fails.

Just pair it secure. When joining to the hub, tap the action button twice quickly and it pairs secure. I never pair anything insecure at my house. Range on every zwave device sucks. You just need lots of plugged in stuff. If you’re going to be mostly sensors you should go Zigbee. Every light switch in my house is GE/Jasco. That’s enough to have pretty good reception everywhere.

Thanks for the note. Yeah, I’m regretting these z-wave sensors. I was trying to avoid a either a mains powered device on my arduino or a IR board with external power as I want to power something when motion is triggered.

I thought this would work but it’s either unreliable, doesn’t work or is slow. None of these attributes I’m willing to accept for this project.

Really though, the 10 feet through one wall is horrible and despite being z-wave plus, i’m tempted to send all of them back to amazon (despite overseas shipping costs)

I hear you and feel your pain. It is all about using the right tech for the job. I went zwave because of several reasons. One, radiation. I have so many 2.4 and a few 5.8 ghz devices and I know I was going to have a LOT of devices in my home automation plan so I would prefer 900 MHz communication since the lower frequency is less harmful to your health and also won’t get interference from all those devices plus the microwave. The published range is line of sight in a laboratory. Expectations are important. If they say they only reach 9 feet in reality nobody would buy them! Mains powered devices act as repeaters which is the crucial part of a z-wave deployment, repeaters. When you look at what a repeater costs versus a z-wave outlet or light switch, in my mind there’s no argument that I’d rather have functionality like turning stuff on and off over just passing a signal along. Granted that comes at a price. Zigbee will have a big better range but also at a cost. Luckily SmartThings supports both standards and at an unbelievable price. So, Z-wave really in my mind has two sweet spots. You’ve got few devices in a small space like a studio apartment, or you use it as an infrastructure in a home. Every now and then when I add a device it will get pissy with me as the network adjusts but generally the self healing happens fairly quickly.

I have so many 2.4 and a few 5.8 ghz devices and I know I was going to have a LOT of devices in my home auto

Interesting though because my german friend recommend ESP 8266 wireless board. I have a VERY high-end wifi network at home (Cisco AP’s with Wireless controller) to cover the area and get 600 MBps anywhere in the house (ac) – I’m wondering if I should just leverage that and find a more local controller.

My battery powered zigbee devices work just fine on the second floor, through multiple walls. The same cannot be said for the mains powered “smart” switch. However, my question is, what is the cost you mentioned as I see the zigbee’s are prettt much the same cost?

I originally just thought I could buy a bunch of various sensors but I guess I may have to look at other options.

We are new to the SmartThings Hub and devices. Our initial reason for purchasing was to control our landscape lighting. Because of the preferred location of the hub and the outside switch box, we purchased the Aeon Labs Aeotec Z-Wave Smart Switch 6, Gen 5 device. One of the reasons we chose this device was the USB port and it does not block the other plug on the outlet. The device works perfectly as a repeater for the outside switch box - our routines are finally working and the lights come on and go off as programed.

However, the routines I have set up for the Z-Wave switch are not working consistently. I am wondering if anyone else has noticed an issue. For instance, routine to turn the lights on a specified time worked yesterday, but the routine did not trigger today. The only difference between the days is that today I was charging my phone and yesterday I was not. Yet, I fail to see how this could interfere with the routine.

Any help or suggestions would be greatly appreciated. Thanks

. I am wondering if anyone else has noticed an issue.

Yes, ST’s scheduler has been broken for a long time. There are things you can do to make it more reliable, but nothing I know of will make it 100%.

Hope this helps. There are plenty of threads around here of people’s work arounds.

Thanks, Jason. We did this same thing for the landscape lights - but thought this was a signal issue because of the metal box and the distance. Never thought we’d have to do the same for the inside light switch. But, my husband made that suggestion this morning.

I greatly appreciate the feedback.

In general these switches are working fine for me.

I have them all included “insecurely”

Also, I did not see any message in the logs that indicate it was secure included.

Anyone have any thoughts on secure include?

Four months ago, I bought the Aeon Labs Aeotec Z-Wave Smart Switch 6, Gen5 (two of them, as a matter of fact) for the same reason - as a Z-Wave repeater for my Schlage Z-Wave lock in my garage. I selected this switch because I also thought I might need support for encrypted traffic. I did get them to pair with my ST Hub v2, but they did not do anything as a repeater; I was still unable to get my lock to work properly in ST most of the time. Then two weeks ago, I added four GE Z-Wave In-Wall switches for my lights - one of them was in the garage about 25 feet away from the Z-Wave lock and the other three were inside the house and not so close to the Z-Wave lock. That did the trick! No more problems with my Z-Wave lock ever since. I guess I didn’t need encryption.