I am a noob and just getting started with HA. I have this existing ADT home security systems with sensors already attached at doors/windows. I will be figuring out how to get the alarm system to run w/o ADT Monitoring (locally), but want to be able to have the ST hub know when the alarm is armed and when its tripped it does certain actions i.e. turn all the HUE bulbs on, round the z-wave siren, email me, etc. I assume I need to figure out a way to connect a “out” from the board into ST via a ST sensor of some sort…?

The issue is I cannot figure out what model of the alarm I have, can someone help me understand how I would go about integrating the alarm system into ST?

Any help and guidance will be appreciated!!!

How many wired sensors does the alarm have?

@ashutosh1982 - any insight would be very helpful!!

You can do this with an Arduino if you are okay with electronics.

@Todd_Whitehead I am ok with electronics, but never played with Arduino, any instructions available that you can point me to?

Arduino is a micro controller that can be coded on a computer and programmed via USB.
https://www.arduino.cc

You can hook things like sensors to it and Smart Things makes what is called a Thing Shield that allows them to talk to Smart Things natively.
https://shop.smartthings.com/#!/products/smartthings-shield-arduino

He also wrote device types, and smart apps to facilitate converting physical wired contacts to show up in Smart Things via this hardware.

If you want to keep your existing alarm system working, you could add additional Arduino logic to drive relays that trigger when the contacts close and that would allow you to have the functionality of your alarm system and have everything reflected in Smart Things.

Getting the ADT Alarm mode to show in ST is not something I have tried to do. I’m not sure how I would do that. But everything else is doable.

I gutted my old alarm and only used the sensors with ST. I am working with a friend’s alarm system to implement it with Relays to keep the alarm intact.

At my house, I replaced the keypad that controls my alarm (that had 4 wires running to it) with an LCD display that I use to display the status of all of the wired sensors.

This all works really well.

If you decide to go this route, I suggest starting with an Arduino Mega and a Thing Shield and then looking at the sample code in @ogiewon’s Github repository.

@Todd_Whitehead this is great! Thanks so much. A few questions:

Yes. You use the Arduino to read the state of the door sensors and @ogiewon’s library and sample code to communicate with the thing shield, which communicates with ST.

For the door sensors, there should be two wires for each one attached to the alarm panel. Pull those three pairs of wires out of the panel and run one side of each one to a digital pin on the Arduino Mega. Tie the others together and then run a pigtail from there to a ground pin on the Arduino.

The ST Anything libraries will monitor the state of those digital pins and when they change, ST will know it and you can use that to trigger things like any other door sensor.

The motion detectors are a little harder. They need power to operate and the Arduino probably cannot provide that power. So you will need to use an additional power supply. if the motion sensor has four wires, then there are probably 2 for power and 2 that would get wired in just like the door sensors. If it only has 3 wires, it gets even more complicated.

I am using this LCD display: 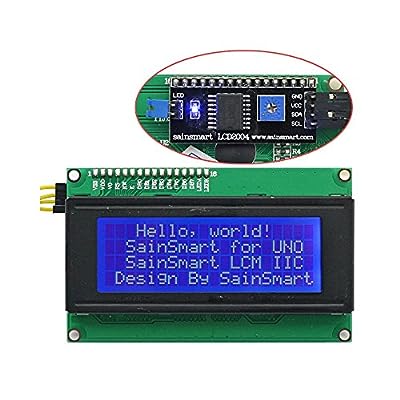 It takes 4 wires and I used code here to learn how to write to it:
http://arduino-info.wikispaces.com/LCD-Blue-I2C

The ST Anything libraries don’t handle the display. I added my own code for that. I actually had to replicate some of the sensor tracking code that the libraries handle so I could tell when to update the LCD. It’s not ready for public consumption yet. I’ll try to clean it up over the weekend and post it on github.

But, really, that should be the last thing you would want. I’d focus on getting the other stuff working first.

If you prefer to keep the panel in place and your existing keypads working there are other options discussed in this forum like alarm server and this one that I implemented:

The device you hook up to ur panel acts as another keypad.

I actually had to replicate some of the sensor tracking code that the libraries handle so I could tell when to update the LCD.

Todd - I believe you should be able to access the values of the various ST_Anything sensors from within you’re code within the loop() portion of the Arduino Sketch. This would lessen the load on the Arduino if you’re currently polling pins a second time just for the LCD display. Let me know if you’re interested and I can probably whip up a simple example.

That would be useful.

What would be awesome would be if your code could call an Arduino function that passes the sensor number and state if the state changes! (During initialization, it would call the function for every sensor…)

It doesn’t seem to be a terrible drain. I did have to lower the counts that delay reporting of my garage door sensors…

I like this idea. I am going to see what it will take to make it happen. I am thinking to keep it simple and generic, the “Everything” engine of the ST_Anything library will simply call a function in the user’s sketch, returning the exact same information that is sent to the ThingShield/ST. The user will then have the option to do whatever they’d like with that information (e.g. update a LCD screen, trigger another device, etc…) May take me a day or two to implement as my schedule is busy this weekend.

Would be especially helpful for people using an Uno or Yun with limited memory. (The Yun would be a really good candidate so you could send messages to the Linux side with those functions, allowing even cooler things to happen there!)

My son and I have added the callback function as we discussed earlier. Please see my full post regarding these new features and the example sketch in the main ST_Anything thread. Give it a try and let me know what you think!

My son and I have added two new capabilities to the ST_Anything library. The library now supports the ability for the Arduino Sketch to subscribe to the data stream that is sent to the ST Cloud via the ThingShield. This allows your user created sketch to be aware of changes to your various sensors and perform some sort of local processing within the sketch. The library now exposes to your sketch the function within the ST_Anything library that handles receiving a command from the ST Cloud. This will allow you to easily issue a command to one of your ST_Anything devices from within your sketch. Combined, these two features now permit local processing of events within the Arduino, which is especially useful for time-critical actions that cannot tolerate the latency from the ThingShi…

Folks, Need help … I have been working on integrating my Vista20P (ADT managed) that has a fixed display keypad integrated with Smartthings. I have enjoyed the whole process till I hit a brick wall yesterday and cannot move any further. Below is my status:

What a ride it has been this week

@sahabjee you may want to repost your question in this thread that discusses your specific setup:
AD2SmartThings

Folks following that thread should be able to help you.