it’s not, and there isn’t a UL/code approved way around the neutral requirement.

Electrically the neutral and the ground wire terminate to the same ground bus in your circuit box, however the ground wire isn’t supposed to carry any current in normal use, it’s there to carry current under fault conditions.
So jacking the ground into service as your neutral will work, but is not going to pass any inspection and you’re on your own with it.
Personally I would not bring the ground into service as a neutral, and I’m on the bold side of the world electrically…

@Mike_Maxwell thanks for the heads up and advice. I guess the next step is taking a switch out and seeing how the wiring is set up before I start ordering parts.

@Mike_Maxwell Hey Mike, I tried your Legrand hack I am not sure what I did wrong. (even watch the video). It seems like I created the momentary switch but when I try to operate it manually it doesn’t seem to work. If I push and hold the top up the light will light but as soon as I release it turns off. Am I missing something?

@rushboys Did you change the aeon switch to push button mode?

@Mike_Maxwell you are going to hate me but that will be after pitying me for sounding like the village idiot.

I haven’t hooked it up to the aeon switch because I wanted to test it to ensure that I had done that part right. So basically I hooked it up to a single switch to ensure that it worked. does this hack only work if it is attached to the aeon switch and if that is so how would you hack the second switch on a 3 way set up since you would only require 1 aeon on that circuit.

If you just replaced the existing switch with the momentary Legrand, then the switch you modified is working correctly. It’s a momentary pushbutton so it won’t keep the lights on until it’s connected to an aeon module which has a configuration option to work with momentary switches.
The second switch gets modified just like the first one.
Here’s the way I wired mine up with pushbuttons.

Here’s the tactic I’m having a run at. One aeon dimmer/or switch module, works 3, 4 or n way. Does require momentary action switches and a relay. [image] I found this bad boy for the relay: 120vac SSR I did read somewhere that the aeon switch (and also the dimmer) were supposed to allow 120vac as a trigger input. Yea, well I toasted a dimmer trying that, hence the relay…

You also need to change the aeon parameters to momentary, this can be done in the preferences section using these custom device types. After changing the parameters you can switch back to the stock ST device type if you want.

I built these, well, just because… Includes configurable parameters for reporting and external switch type. Built in hardware flasher is implemented (three preconfigured modes), can be called via custom command or used via standard alarm capability. Indicator status is ditched as it’s not implemented in the micros. @wackware 's better dimmer stuff included. And a smart app to use to flash a series of these together, tell the kids its dinner time, alert gramps, whatever… Be nice, these are only the second and third devices I’ve written…

Okay I think I may be getting over my head for my very first time doing this stuff. Let me see if I have this right.

On a two switch 3 way set up. You would turn one of the paddles into a momentary switch which would then be connected through the Aeon switch module. The second switch on this circuit would remain as a paddle switch thus not requiring a second Aeon (slave).

On a single switch then you would need to run an Aeon switch if you were going to turn that paddle into the momentary switch or leave it as is that being a paddle switch.

Or to avoid this you could run with the Adorne Push which is just a simple push switch granted a bit more expensive in the long run to complete the project.

@Mike_Maxwell I also wanted to thank you for being so patient with me as I know this must be frustrating dealing with such a newbie that instead of just buying a out of the box solution he has decided to try something he probably shouldn’t yet.

a three way set up as I have configured requires the following
two adorn switches modified to momentary
a aeon dimmer or switch module
1 relay or SSR that’s in the wiring diagram link I posted.

the aeon controls the light load, so only one per light circuit, be that a single switch a three way or 4 way.
the relay controls the switch input to the aeon, one aeon, one relay.
the momentary switches control the relay, the relay is only required for 3 way and 4 way setups.

the legrand radio enabled devices are not compatible with ST, the legrand non radio enabled push button switches do not offer an integration point with the aeon module, so those switches won’t work with ST either.

The aeon modules can be controlled by a momentary or a toggle switch, you just can’t mix the two different switch functions in a single three way circuit.
So you need all switches in your three way to be momentary or toggle, you can’t use both.
The diagrams and setup I have shown is specifically for push button (momentary) switches using aeon dimmer or switch modules.

@Mike_Maxwell Hey Mike do you know if the amen micro switch will work with the Adorne Push™ Switch. (www.legrand.ca/adorne/products/switches/aspu1532w4.aspx)

I can’t be sure from the documents, I suspect it has its own internal relay, so it wouldn’t. Pretty sure I went through all their products on the shelf, and obviously any of their devices that include electronics aren’t likely to work. How much is this?

@Mike_Maxwell I am not sure what the basic components are for the push switch. It runs about $21.00 bucks or so give or take a couple of cents. Ideally I would love it if Aeon labs finally came out with their multi-gang touch pad but I haven’t been ablt to find any news on the release of this anywhere. So my next option is the Adorne system If the push switch worked I would spend the extra to go with it over the paddle hack version.

@rushboys
I found the cad drawing for these…
The output of this device is 120vac, this being toggled by the momentary button on the front.
So in order to use this with the aeon you will have to have another relay connected to the Legrand device, the contacts of which then connect to the aeon switch inputs.
Your light then connects to the aeon.
Aside from being a very expensive implementation, fitting all of this in a single gang box will be almost impossible.
It may be possible to eliminate the relay for the aeon, as the aeon switches (not the dimmers) will accept 120vac on the switch input. I’ve not used this implementation, but it is in their connection drawings.
You can’t use the 120vac on the switch input for their dimmers…, ask me how I know…

@Mike_Maxwell so how do you know this for the dimmers? Hahaha just kidding.

IF I am to understand this correctly then if I go just with the on/off aeon switch in theory will be able to eliminate the relay and in theory just be able to go with the switch and micro switch which should work and will still be able to fit it in the box. Basically it would be about a $70.00 switch all parts in compared to the $40.00 Adorn Paddle version instead.

I’m looking at aesthetic basically and if I can justify the cost increase with the look and more importantly the wife’s approval.

Correct, however this Legrand device is deeper than the paddle switch, this will make single gang installs more time consuming.
A three way setup may not be possible, or at least it will be challenging, be sure that you’ve proved that out before you make a commitment to these Legrand devices.

@Mike_Maxwell hey Mike, it has been a while. I am back on trying to get things moving I have a couple of questions if you don’t mind.
Is this the correct one for the doing the Adorne switches?


are these plug and play devices cause I keep reading about changing them to momentary switches which I am not sure how to do that.
also would you have a picture of one of the Aeon switches that gives a better idea on the size?
Mike_Maxwell (Mike Maxwell) April 5, 2016, 3:32am #19

@Mike_Maxwell hey Mike, it has been a while. I am back on trying to get things moving I have a couple of questions if you don’t mind.
Is this the correct one for the doing the Adorne switches?
http://aeotec.com/z-wave-in-wall-switches/187-z-wave-in-wall-lights-controller.html
are these plug and play devices cause I keep reading about changing them to momentary switches which I am not sure how to do that.
also would you have a picture of one of the Aeon switches that gives a better idea on the size?

Not sure what you mean by plug and play, by default they are set to switch of a normal toggle. Yes, those are they bad boys. 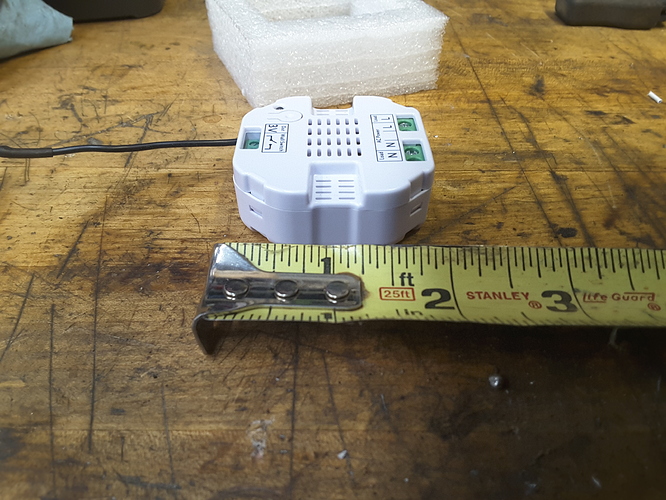 So if they are normally for a toggle how do you switch it to the momentary instead?

I’ll apologize now because I’m going to be ordering these in the next day or two so in about a week or so I’m sure I’m going to have a lot of dumb questions for you.

So if they are normally for a toggle how do you switch it to the momentary instead?

I’ll apologize now because I’m going to be ordering these in the next day or two so in about a week or so I’m sure I’m going to have a lot of dumb questions for you.

You can hold the join button for two seconds after its joined to switch modes or use the custom device I wrote for them and set it via preferences.

Okay so one way is to push that little button once it is all hooked up and that will do the other way is your protocol that you wrote. Two questions now
A) which one is easier
B) how do you apply your protocol

Since you’ve not installed a custom device type before the button on the aeon will be easier.