Hey guys, i’m very new to the smart home game and am looking to add light switches over smart light bulbs. I have been on here researching but am having a hard time deciding what all i need to do. I’m hoping to score some deals on black Friday. Anyways…my kids rooms have regular light switches but are in 4 switch panels. The switches control a light, closet light, ceiling fan, and another light.

I have not found a smartthings panel with 4 switches…would i just get 4 separate single switches and install them? Sorry for the noob question but would appreciate any insight into some good cheap switches to use.

Most of the Z wave switches are Spec’d for up to three in a box, but not four. For example, both Leviton and GE have instructions for triple gang boxes. You could write to them and ask if the same switches can work in a quadruple gang, but I’m guessing that since with each additional switch the wattage Max goes down that it probably runs too low.

There’s a nice looking alternative, but the problem is it’s not cheap, and that’s to use an individual in wall micro for each of the switches. @mike_maxwell combines Aeotec micros with Legrand retractive buttons, and I think they look really nice. There are lots of color options. But they aren’t cheap.

If you want distinctive device plates, with a huge number of options, have a look at the Legrand Adorne line. I’ve combined these with AEON dimmers and switches. [image] [image] [image]

If you did go with smart bulbs, then it would be easy, there are several multi button battery operated wall switch devices that have four or more buttons. And if you just went with regular white smart bulbs, those are about $15 each, plus maybe $50 for the four button wall switch, so that’s probably the least expensive choice. But I do understand if you would rather get smart switches and dumb bulbs. I just wanted to mention the alternative.

Definitely check with Leviton, though, I think they’re the most likely to have a regular Z wave rocker switch that you could put in a four gang box. Let us know what you find out.

Good point. Here’s what a standard 4 gang Wall switch with rocker switches in it would look like:

( well, the second switch is a blank, but you can see the form. )

Thanks so much for getting back to me…yes, this is what I"m talking about…my current switches are not rocker switches. 4 gang switch box is what I’m looking for.

So, i would need to get 4 individual switches and then fine a 4 gang box to put them in correct? Do you have any recommendations? I’ve heard the wemo switches are good…but $45 a switch is a bit pricey.

Thanks again for helping this noob out!

If you change the wiring so you only use two switches, then I think all the network brands will work fine just side-by-side, but of course always check the specs on each individual device you’re intending to use.

I have multiple instances of 4 GE switches next to each other in wall boxes. You can buy the covers at Homedepot or use your existing cover for the “dumb” switches. 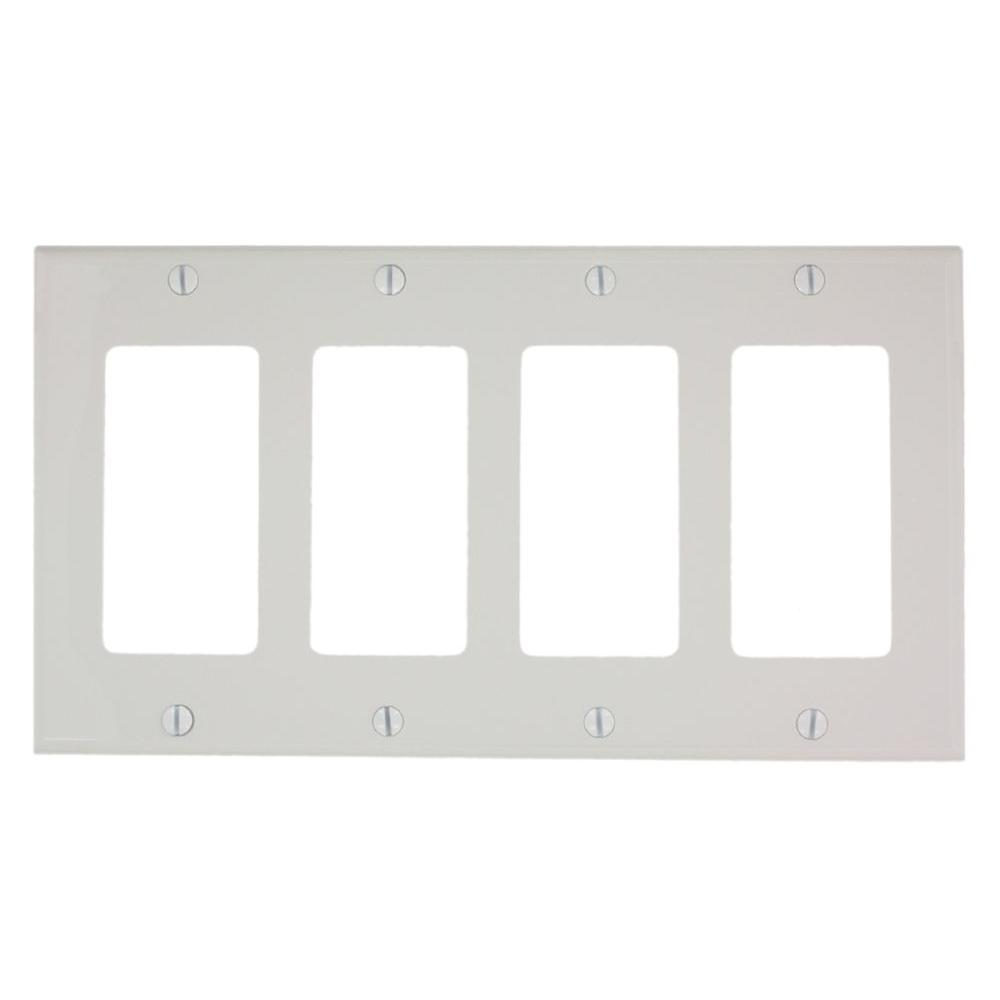 Leviton Decora brand designer Wall plates available in a wide spectrum of colors and styles can add subtle elegance to any home. Sleek, versatile and convenient, they also come in a midway size that gives

One hint to save space in the box (smart switches are a bit bigger then dumb switches): Connect the white jumper wire from switch and only connect one switch instead of connecting them all together to the bundle in the box.

…and I just noticed that Amazon has a sale on the GE switches right now:

Walmart is also having a sale on the previous generation GE switches and dimmers. These have worked great for me.

Is Z Wave plus worth the extra money? Connected Things

Hi all, I'm new in this community and trying to automate my home using Smartthings as hub. Doing some research, I was almost decided to go with GE Switches/Dimmers/Lighting Modules until I came across HomeSeer devices, claiming to be Z Wave Plus. Then I research a little about the differences between Z Wave and Z Wave plus (I went though the FAQ here). Now I'm a bit confused/undecided. GE seems to be good product, with 35usd for switches and 45usd for dimmers. Any Z Wave plus alternative is 55usd for switches and 65usd for dimmers. That's a big price differences (around 50%). Is it worth? I wouldn't like to go with an old technology in a new system and regret in a couple of months, but also the differences in price may make me just wait for lower price and cancel my project for n…

thanks so much, I will research the difference between the 2. My hub is on the main level and these switches will be upstairs right above it. I’m hoping i can get by with the old z-wave and won’t need the plus switches with the extended range.

I had heard a rumor that they were going to make a switch with “alexa” capabilities at some point. That will be pretty sweet.

I’m sure i’ll be back on the forum when i’m installing these switches!! Hoping black Friday brings some good deals! @ErnieG
They are $10 each. Just got them from my local Walmart, in the clearance section.

so i would just need 2 of these for a 4 gang switch box? The switches still control the stuff and I can also control in smart things app?

just need 2 of these for a 4 gang switch box

Vision relays? Yes.
They are the same as Monoprice