Replacement for three switches in an electrical box?

Any ideas on what’s the best option to replace these? Three switches in a single gang box, the lower one is a three way switch that controls the fixture in the staircase, the upper one controls fixtures in the living room and the middle one controls the porch lights. Also, concrete wall, so difficult to make more room for installation a triple gang box.

I am also searching for something like this, 3 or 4switches

What country are you in? Device selection does vary somewhat.

Also, are you willing to use either smart bulbs or an inline micro for each light? If you, that gives you more switch options, but increases the cost over just replacing the current switch and continuing to use dumb bulbs.

I’m living in Mexico, with no problem to import from the US, I’ve already replaced most of my other switches in the house with smart switches (lutron caseta because no neutral is available) so I’d like to continue in that line to keep control directly on the wall for kids and guests. But I haven’t figured out how to do it here. Summing up, I want wall control and automation capabilities, I’m willing to try anything that fulfills those needs.

So there’s no neutral in that box?

No, no neutral. I forgot to mention. It’s an old house and I guess they never thought about a “smart home”

OK, in that case by far the easiest way to do this will be to put smart bulbs in each of the lighting locations and then just use a battery operated switch on the wall.

If it were me, I would put a small hinged box over the existing switches so you could access them if your home automation system wasn’t working. Then you could mount the battery operated switch on top of that. But some people prefer to remove the existing switch and put a blank plate over it because they prefer the look of it. That’s up to you.

There’s a good DTH for it here:

It is Zwave, so make sure you get the frequency that exactly matches your hub.

Another Z wave device that a lot of people like is the Nexia NX1000. The price is going up since it was first introduced and now it’s usually $99, but it does have five buttons. 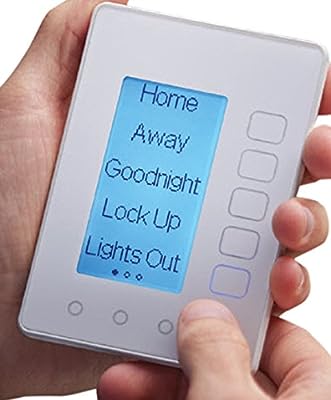 The remotec 90 is usually about half that, and is available on either the US or UK zwave frequency. It has eight buttons, and each can be tapped, double tap, or long hold, so you get 24 functions altogether. So it’s another popular choice.

Anyway, all of these and more are discussed in the buttons FAQ. Just read the descriptions carefully, as some are battery-operated and some are mains powered.

@Alfredo_Garcia - Those look like bticino switches we use in Italy. They are way smaller than typical US switches and that has always made we wonder how Italy - and other countries using the same hardware - would ever be able to make homes smart. The only way I can think of is to use Fibaro / Aeon style dimmer / relay modules that fit in the, often multiple, junction boxes in each room.

If this is what you are using then the 3 gang box should be more or less the size of 1 gang box used in the USA. Do you have conduits between these switches and electrical boxes in each room?

This is what it looks like in Italian construction before concrete in poured to form the floors, and stucco is applied to the walls:

Is this how your home is built?

Yes my house is like that, all the wires are put into conducts before the walls are finished.

Then you likely need to use this:

Make any dimmer switch wireless connected. Perfect lighting is key to a smart home. Installed behind your existing switches, Nano Dimmer enhances all of your...

I’d go with @JDRoberts recommendation to just use smart bulbs and a remote multi port battery operated wall switch. Concrete and no neutral…Yikes!

That’s quite common in some countries. Also adobe, which presents similar RF issues. Mesh can be a very helpful topology for those situations.

With conduit and junction boxes it is usually super easy to run new wire (stranded). I rewired half of my house in Rome correcting issues over the years. Neutral (light blue wire) was always there as it comes with the hot line from the closest junction box, the hot goes to the switch and then in continues up to the light fixture.