Hi, I was wondering, would it be possible to edit which zigbee channels the hub uses? I read online that it may be possible for Wifi 2.4 GHz and Zigbee to co-exist if zigbee is limited to channels 24-26 and WiFi only to channels 1 and 6.

I am using an Aeotec hub.

good news / bad news… yes you can change the channel but that capability is only available for several more weeks (unless they add the feature elsewhere).

You can login to IDE. Once you do, go to My Locations and tap on the name of your Location. Then to change the channel, go to My Hubs and select View Utilities. Look for “Change Zigbee channel”.

Do you think they’ll add those features? I think it’d be pretty dumb of them not to. I noticed some of those options are also available in the app, so… is there any news confirming or denying it?

Also, should they not add this feature back, will I lose the ability to change it from 24, or will it go back to the default channel?

is there any news confirming or denying it?

no news. there are features users would like to see in either the app or my.smartthings.com 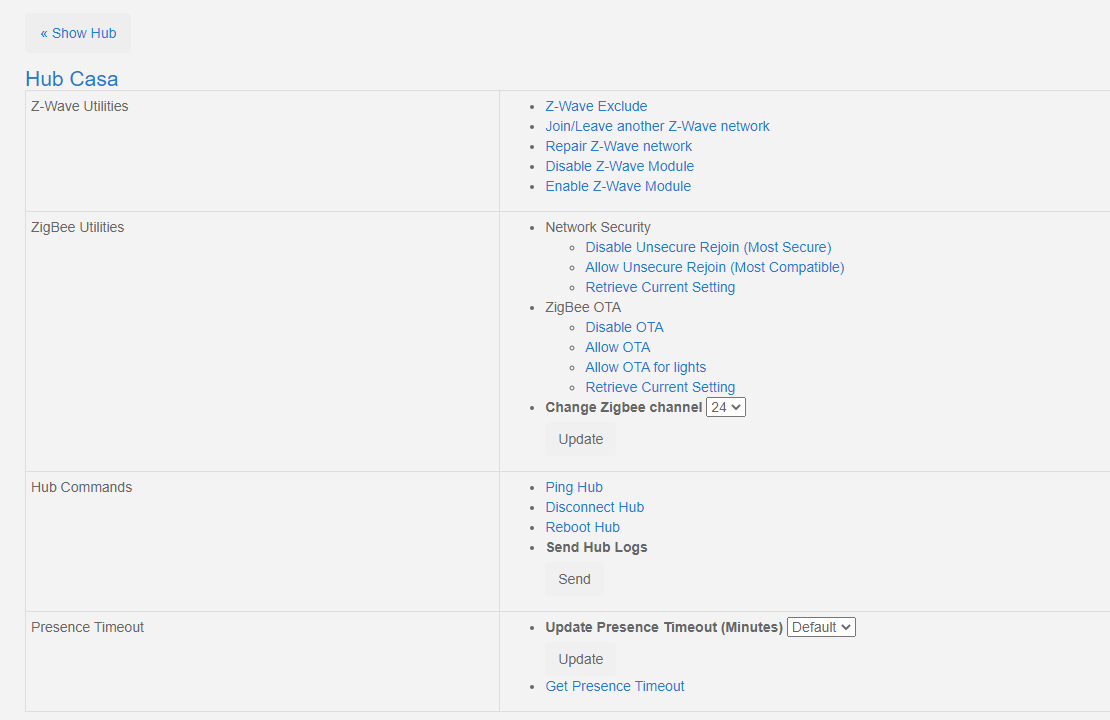 Cause like, as seen here, some of the features seem to have been ported (Z-Wave ones for now, it seems. My guess would be because Aeotec sensors use Z-Wave), so hopefully Zigbee utilities will come too?

so hopefully Zigbee utilities will come too?

zigbee network security and zigbee OTA is available in the app. only change channel is unavailable (at this point). Others want the hub reboot option. Again, many users want to see this feature but ST has not provided any info.

Aeotec does offer zigbee devices now… the ones they took over from ST… the leak sensor, multipurpose sensor and button.

I see. Let’s hope it works fine even after January 1st then. It would be really stupid to drop something as useful as this.

Let’s hope it works fine even after January 1st then.

I can say with almost 99% certainty it won’t automatically change. Changing the zigbee channel isn’t something that should be done casually. Some older devices don’t even work with some channels. Some systems dont even support it and require you to rebuild the mesh when you do it.

And as Op is aware of - being on the wrong channel can hose your entire mesh.

If they DO automatically change it, yell at them - loudly - it can break stuff.

What’s more likely is when they kill the IDE a nobody can change anything for a couple months until they get the feature into a CLI release.

Also if they do manage to lock you out, that’s not the only combination of channels. The article I think you’re referring to gives a map of how Zigbee maps across the 2.4 Ghz wifi channel space.

Theres other strategies like ‘all 11’ if you find yourself stuck on a channel you can’t change and now have to work your 2.4 Ghz WiFi around…

ZigBee radio settings and a lot more are still on my list.

Yes, that is the graph I was referring to. I’m really not an expert when it comes to specifically Zigbee (or Smartthings for that matter; always found smart home to be unexplicably tricky for me to properly grasp at a deeper level of understanding) and thus I don’t know exactly what it’ll break, if anything.

But if I’m stuck unable to change the channel, or indeed know which channel I am currently on, should they change it, I can’t really adapt my WiFi channel unless I brute force it. Which would be pretty annoying, plus, it would be odd to take control out of the users’ hands.

I’m not sure if @csstup is from the dev team (Sorry for my ignorance) but if so, that’s great, great news.

up until about 2018 there was no way to change the smartthings Zigbee channel except to start over with the hub, and it would pick what it thought was the best Zigbee channel for the environment. The default was channel 14, which comes from the older ZHA profile. Anyway, the problem was that it might just pick the same channel number again the next time. Back in those days, it was usually easier to change the Wi-Fi channel.

Then, for the last few years, we have had the ability to change the Zigbee channel through the IDE. I’m not convinced they’re going to give that back to us, though: selecting the right channel when you have to manage Wi-Fi, thread, and Zigbee all in one hub is pretty tricky, and they may want to just use their own algorithm. That wouldn’t be my first choice as an engineer, but I think it’s an arguable position when you have that many radios in one box.

Of course, that doesn’t address the issue for people who have a mix of older and newer devices, which may themselves be tricky on different channels. But I wouldn’t place a bet on their reinstalling the capability.

Here’s the old community FAQ on Wi-Fi and Zigbee channels if you’re interested. All the information there is still valid, but the problem is now we have a new radio in the mix, the one for thread, and that just complicates everything yet again.

FAQ: Networking and Reducing Channel interference between WiFi and Zigbee

I’m not sure if @csstup is from the dev team (Sorry for my ignorance) but if so, that’s great, great news.

I’m not. My list was stuff I still feel we need/want.

Honestly, I think not adding this feature back is awful. Why would you not allow any one user to customise their hub to their needs?
Not all channels are “safe” to use with wifi. There are some where all theee wifi channels overlap.

And then there’s the issue about some devices possibly not liking certain channels.

I think the end user should have full customisation over their experience, and whether they wanna do stuff manually or let the hub figure stuff on its own should be a choice the end user has. I would be disappointed if this transition to Edge drivers removes options for the end user.