I installed a brand new Yale YRD240 lock today with z-wave module. Lock seemed to discover and add ok, but when I lock the lock, 4 out of 5 times, it doesn’t stay locked in smart things. Within seconds it switches back to unlocked (though the physical state is still locked). Conversely sometimes when the lock is unlocked it’ll report in ST as locked. There doesn’t seem to be a physical problem with the lock. It turns smoothly and the bolt seats properly. I’ve tested it with the door open so as not to obstruct the bolt in anyway and have the same issue.

Needless to say, a mis-reporting smart lock is about 50% useless.

This problem is apparently so prevalent that smartthings has a whole page about it, but their offered solution, of removing/re-adding the lock did nothing for me.

My lock is showing the wrong status in the SmartThings app

These instructions apply to compatible locks. Please check the Works with SmartThings page to ensure your lock is supported by SmartThings.   Troubleshooting Your Lock If you're experiencing incorr...

I bought this lock because its on the supported list and so many people claim they’ve had success with it. Is there some issue with secure vs insecure inclusion? The ST page I mention above alludes to that but I can’t find where to configure it anywhere.

Secure/insecure join is for ZigBee devices. I would guess that it is one of these two things.

In both cases, you are probably not receiving the lock/unlock confirmation.

I’ve got several of the 240s in two locations and never had problems with them within ST — but they are also fairly close to GE Z-Wave wall switches.

Lock is very close to the hub. I can literally touch both of them if I stretch my arms out.

I’ve noticed as well that the factory supplied batteries are not optimal, but I haven’t yet tried swapping them.

What ended up working for me is switching to this custom Device Handler: 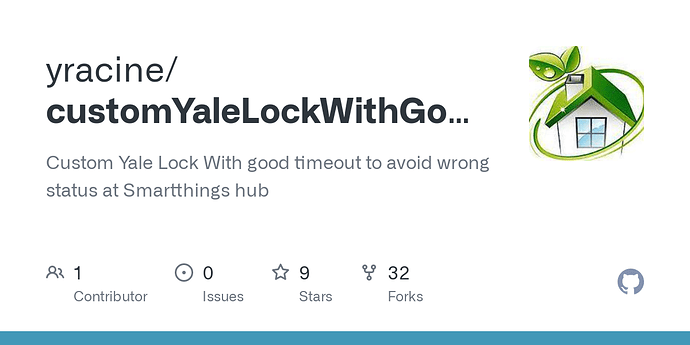 does anyone else have this problem with their keyless deadbolt? i have already tried excluding and reincluding device as well as resetting the device to factory defaults. i also have vera as a secondary controller which displays the correct status for the lock.

Not sure exactly why I’m having this problem and most others aren’t. I have another YRD240 coming this week and I’m curious to see if the default DH works with it or if I have to switch to this custom one as well.

Lock Manager Incomplete List of features: Manage user codes on locks. Manage Keypads. Review and manage active lock codes. Set lock access based on schedules. Receive notifications when a user used their code. Run Hello Home phrases based on lock/unlock events. Manage Hello Home phrases based on keypad inputs. This app works using 3 child apps and 1 parent app. It is recommended that you install all 4 apps, however if you do not use keypad devices, it is not required to install the keypad child app. Note: If upgrading from any beta version, it is required to uninstall the app completely before installing. The architecture of this app has changed in a way that is incompatible with previous versions. How To Install User guide has old information. There is now only one app to install…

Works well for me even in its beta stage. But I’ve also used Erik’s lock manager apps in all its incarnations with no problems at all.

I just tried the ethayer Z-Wave Lock Reporting DH included with Lock Manager above and it also has the mis-reporting problem.

So far of the 4 DHs I’ve tried, only yracine : Custom Z-Wave Lock works for me.

I just talked to both ST support and Yale support.

Sigh… it’s great that ST support is so nice, but real answers would be nicer!

The only other thing (other than staying with the working DTH) that I can think of to try is to re-seat the Z-Wave module if you haven’t tried already … and be careful — that tab on the module is pretty delicate.

I suppose if it work with Racine’s DTH, that should suffice — but that may limit you if other DTH and lock apps offer capabilities that Racine’s DTH doesn’t support.

Ok well, some rudimentary testing suggests that I am able to get both the ethayer Zwave Lock Reporting and rboy Universal Z-Wave Lock Device Handler DHs to report correctly with my Yale YRD240 by changing the lockandCheck function’s timeout from 4200 milliseconds to 2200 as suggested by yvesracine.

Can anybody tell me how any of these DHs are supposed to behave in the case of manual intervention with the lock?

If I manually lock or unlock, is the DH supposed to poll and update its status?
Cuz it doesn’t.

OK, what I hope is the FINAL word on this issue.

I’ve finally got manual updates on this lock working too, but for now only using the rboy Universal Z-Wave Lock Device Handler.

I’ve got 2 of these locks now and it turns out that the first one’s rotational sensor isn’t reporting correctly, so its going back. The second one works perfectly.

So to sum up. Automatic lock state updates are fixed by the lockandCheck timeout change above, the manual state change update problem I was seeing seems to be a result of 1 of my locks not operating properly, which I discovered after installing a second one.

Thank you!! This appears to have resolved the issue with my YRD210