So is safe to say that these switches from Lowe’s support Z-Wave and are merely packaged for Lowe’s Iris ?

As I understand it the 456xx stuff from Lowes doesn’t work but I could be wrong!

I can only give you hope, I can’t confirm, but in the reviews for the switch they say it is zwave (knew that), and that it works with vera. Given those two factors, I can’t see why it wouldn’t work with ST. GE devices adhere to standards in my experience, they are not made for Iris, just compatible with it. So I believe you are safe.

Just order the ones from Amazon ^^^. They work perfectly; however, GE z-wave should work regardless.

I use this for my fan switch and posted a tweaked device driver… but I can control on off and speed in smartthings. I have a app that turns on the ac in the office and the fan on hight when it is too hot. 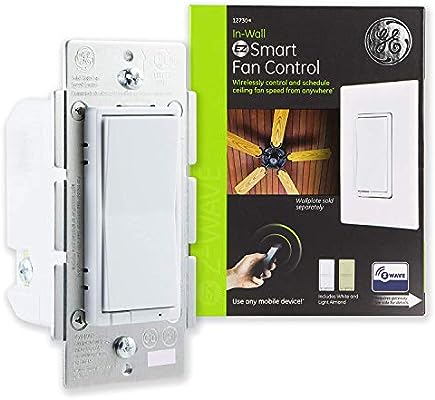 Originally I figured I’d get dimmers even where I don’t care about dimming, however one difference I did find between dimmer and on/off is that the dimmer dims on and dims off. I wasn’t expecting this behavior and don’t really like it that much. Now I only buy dimmers for applications where I really want dimming and just get on/off for the majority of my switches. Just FYI.

Appreciate all the feedback everyone.

Good to know about that dimming capability. Don’t know if I’m sold on that - dimming up to on state, and dimming to off state.

I can not confirm the dimmer switch, but it does not have a neutral connection.

These are the older model that has been replaced with the ones in the pretty boxes. You will also see that these are about 45.00 where buying the other two separately to get a 3-way kit cost about $20.00 more.

The GE z-Wave items when bought from Lowe’s definitely work with SmartThings. I have 8 installed. Note that these are the same as Jasco things. GE does not make any of them—they are made by Jasco and are interchangeable.

The 3-way (and in 4-way configurations) has four connections plus ground. You MUST have a white common ground in the box or it will not work. You should never connect the white using the green ground or there is a hazard. The switch is the complement to the more expensive regular switches. It does NOT have an antenna so cannot communicate to the ST hub. It only sends a pulse to the three way switch via the red traveller. It is half the price of the 3 way but is useless on its own.

(An electrician is required if you insist on pulling a white common into the box if you are missing it.)

Doesn’t seem to work this way unfortunately. The ramp rate is not instant and also if someone dimmed down the light with the physical switch then you can’t turn it full bright with the apps.

Appreciate the feedback. I am going to end up purchasing all the switches I can from Lowe’s and the Fan switches from Amazon.

For anyone wondering if this all worked out, I can confirm that the GE switches that Lowe’s sell all work with the Smart Things hub. Even though every description on their website says “works with Iris”, it’s a z-wave product and they all work. I installed s normal paddle switch, a dimmer and the fan control switches in my home. On the side of the box, it even shows everything that the switch is compatible with.

I see you have a GE In-Wall Smart Fan Control (12730). Can you please tell me how you set up the device in Smartthings? I purchased and installed one today. However, when I went through the process to add the thing to my Smartthings account I was unable to find the appropriately named device–and I read in these forums to stay away from setting up a smart ceiling fan control as a generic dimmer.

Any insight you can provide would be greatly appreciated.

Z-Wave Smart Fan Control Custom Device Type Update: 08/10/2017 - Updated Github URL. Update: 10/09/2015 - Updated Tile Layout. Update: 10/19/2015 - Fixed Current Speed Highlighting on Android. Fixed bug in integer/string comparison that resulted in possibly highlighting the wrong speed. Added “Adjusting” highlighting of selected speed. Code cleanup. [image][image] [image][image] Hello Everyone, I’m a new SmartThings V2 owner and my first adventure into any type of Home Automation. There has been some ups and downs, and findings of how lacking device type controls are. I purchased a GE 12730 Z-Wave Smart Fan Control and how disappointing is it that even in a V2 version of the hub that there is not really a Fan Control Device Type. The Dimmer Switch does not do Fan Control like what Fan…

It has been working fine for me for about 6 month now.

I just installed it as per the instructions then went to ‘Connect New Device’ (Market place) then while it was searching I just pressed one of the buttons on the paddle and it was detected using the default dimmer switch device type, works perfectly fine with the exception of two things:

There are community device types which tidy some things up better but personally I like to stick to built in device types where possible since they usually (the one I use currently is) run locally which means if my Internet is out, I can still turn it off/on from my Minimote. I can put up with the two issues above.

That doesn’t mean the community one mentioned above isn’t any good, they just can’t run locally (yet) but I’d start off by just getting it setup first of all (you can change the Device Type Handler later). Are you detecting it at all? Do you have a blue light on it when powered up?

Just installed mine. Like any other, put hub into discover and turn on/ off slowly.

If that doesn’t work try to exclude it, then reinclude.

My guess is that they’re slightly more susceptible to surges because they have electronics. So far, mine have been through two electrical storms this year (one blackout and one brownout) with no problems. Electrical storms used to be fairly common when it rained here in the southwest deserts during early summer, but we’re in a five-year drought now